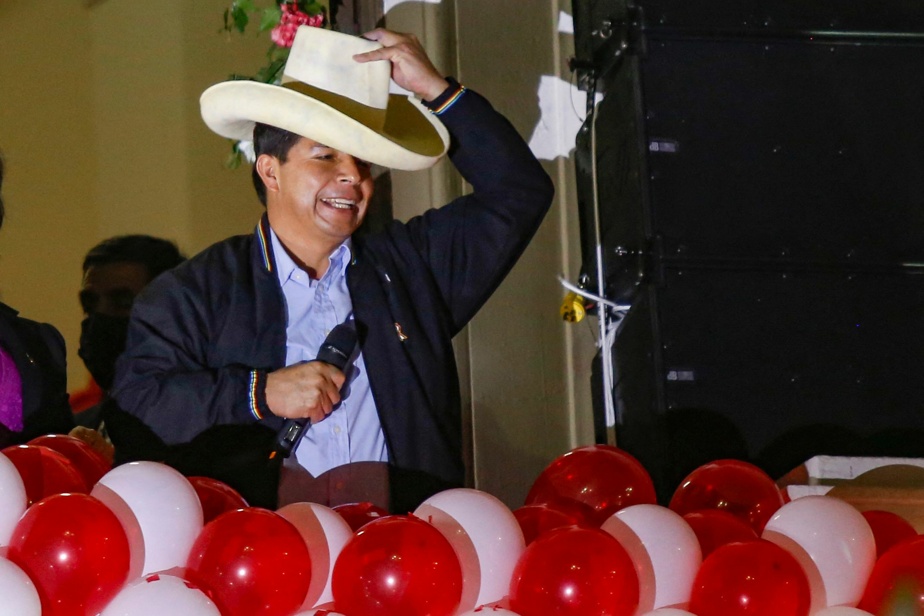 (Lima) Pedro Castillo, a former rural school teacher, sworn in as the new president of Peru on Wednesday, said he wanted to end corruption in the country and announced a constitutional reform project.

“I swear to God, to my family, the farmers, the indigenous peoples […], the fishermen, the doctors, the children, the teenagers that I will carry as President of the Republic, “the new President of the Left told Parliament.

“I swear to the people of Peru, for a country without corruption and for a new constitution,” he added, wearing a black Andean costume and his now famous white hat.

Then he received the two-tone scarf from the hands of the new President of Parliament, the centrist opponent Maria del Carmen Alva.

The swearing-in ceremony takes place on the day on which the 33-million-inhabitant country of the Andes celebrates the 200th anniversary of its independence. Celebrations are planned until Friday.

At the ceremony were King Felipe VI. of Spain, six presidents from the region, US Secretary of Education Miguel Cardona and former Bolivian President Evo Morales in attendance.

The 51-year-old former trade unionist, who has spent his entire career in a rural school in the north of the country, was officially declared the winner of the second round of the presidential election ten days ago on June 6th.

The numerous appeals by his opponent, the right-wing populist candidate Keiko Fujimori, in this particularly close vote had delayed the announcement of the results by several weeks.

On Wednesday, Ms. Fujimori pledged “a responsible democratic opposition” and assured that her Fuerza People’s Party would be “a bulwark against the latent threat of a new communist constitution”.

A farmer in power

“This is the first time that this country has been ruled by a peasant,” said Mr Castillo in his first speech as head of state.

“During the election campaign we said we would expropriate. That is totally wrong. We want the economy to be in order, ”he continued in a new attempt to calm down business circles who fear a possible radical left-wing turn in this country that has been shaped by decades of ultra-liberal economic policy.

On Friday, Mr Castillo had ruled out any attempt to “copy” foreign models and insisted that he was neither a “Chavist” nor a “Communist” with regard to the powers in place in Caracas and Havana.

However, he announced that he would quickly submit a draft constitutional reform to parliament to replace the current draft constitution promulgated by former President Alberto Fujimori (1990-2000) in 1993, and accused him of overly promoting the “market economy”.

Peru could not “be condemned to remain a prisoner of this 1993 constitution,” said the new head of state. “We are going to put a reform bill to parliament, which will hopefully be adopted after the parliamentary debate and then put in a referendum,” he added.

Campaign polarized to the extreme

“However, we have to coordinate our positions with parliament,” he admitted, while his Free Peru party has the most seats (37 out of 130), but is represented without an absolute majority in a very fragmented parliament or no fewer parties.

In a country marked by severe institutional instability, in which three presidents will succeed each other in one week at the end of 2020 and after a polarized election campaign, the question of his room for maneuver remains open.

The new president must also get a grip on the coronavirus epidemic, which has hit the country dramatically, and revive the economy, which plunged 11.12% in 2020.

Peru has more than 195,000 deaths from COVID-19, the highest death rate in the world relative to population.

“Pedro Castillo’s biggest challenge will be not to disappoint people who need quick answers because they no longer have a job, are hungry or risk their lives due to COVID-19,” he told AFP analyst Hugo Otero.

A week ago, the newcomer to politics had called on “all specialists, the most qualified and committed people for the country” to join his team.

Hurricane Nora intensifies on the coasts of Mexico