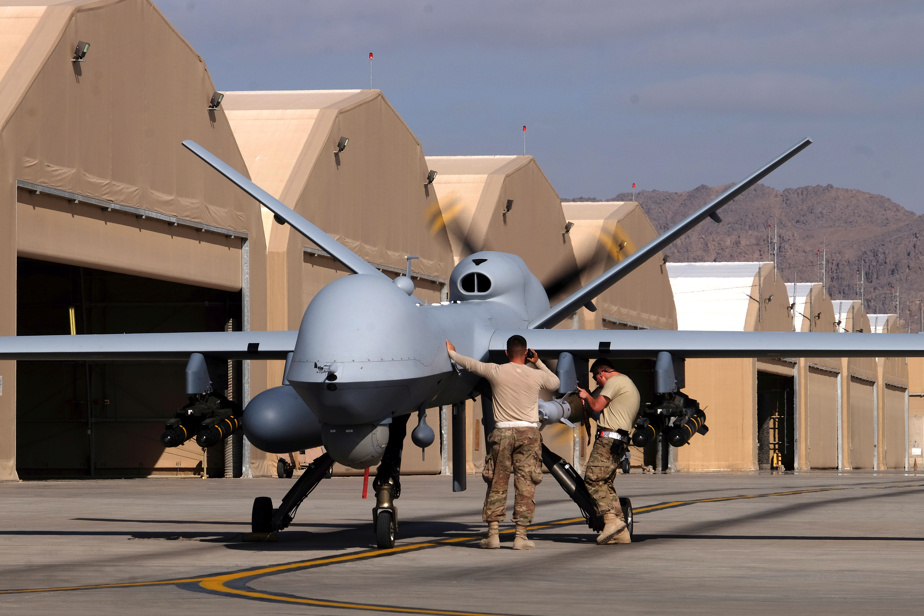 (Kabul) The United States launched a drone attack on an ISIS target in Afghanistan on Saturday as the airlift at Kabul Airport enters its final stages amid extreme tension, with the risk of further attacks remaining.

“The unmanned air strike occurred in Nangarhar Province in Afghanistan. After the first clues we killed the target “, it is said in a statement by Bill Urban of the central command, that we have no knowledge of” no civilian victims “.

The attack from outside Afghanistan is the first attack by the US military since Thursday’s attack on Kabul airport. The attack left more than a hundred dead, including 13 American soldiers, according to a new report from Health Sources.

Two former Afghan government health officials told AFP that around 90 people hospitalized in Kabul have died and 150 have been injured. Some local media reported 170 fatalities.

President Joe Biden had promised retaliation after the attack by the Islamic State in Khorasan (IS-K). “We will hunt you down and we will make you pay,” he said of the perpetrators of the deadliest attack on the US military in Afghanistan since 2011. “We will react with force and precision when we decide where and when to choose . ” “He added from the White House.

According to Washington, there is still a risk of further attacks. “We always believe it […] concrete and credible threats, ”warned Pentagon spokesman John Kirby on Friday. President Biden’s press secretary Jen Psaki said, citing security experts, that another attack was “likely”. The next few days will be “the most dangerous time yet,” she added.

On Friday evening, as on the day before the attack, the US embassy in Kabul asked American citizens to leave the area around the airport “immediately” because of “security threats”.

A gun pass between the Taliban and the Americans on Friday evening increased the already high tension a few days before the 31st evacuation deadline.

The Taliban announced that they have taken control of several parts of the airport: “Today three key locations in the military part of Kabul airport were evacuated by the Americans and are under the control of the Islamic Emirates,” tweeted one of their spokesmen, Bilal Karimi.

The country’s new rulers “don’t care about the gates or airport operations. It’s still under the control of the US military,” John Kirby immediately denied.

As the deadline for the end of the evacuations is getting closer, only a few hundred people are demanding access to the airport on Saturday compared to several thousand in the previous days, so two people who were able to get there in the morning.

Flights chartered from the west continue on the airport tarmac, the last enclave in Afghanistan occupied by western troops.

About 5,400 people are currently seeking refuge at the airport waiting to board a plane, said US General Hank Taylor, adding that the exfiltrations would take place “until the last moment”.

According to the latest information from the US government, around 109,000 people have been evacuated since August 14, the day before the Taliban came to power in Kabul.

Despite the attack, NATO and the European Union had called for the evacuations to continue.

France ended its airlift on Friday evening, which, according to Federal Armed Forces Minister Florence Parly, “evacuated almost 3,000 people, including more than 2,600 Afghans”.

For the first time since taking power on August 15, a French delegation met with representatives of the Taliban in Doha on Thursday. According to both parties, these talks focused on the situation at Kabul airport and evacuation operations.

Switzerland, Italy, Spain and Sweden also announced on Friday that they had completed their evacuation flights, as did Germany, the Netherlands, Canada and Australia before them.

“The innate right” to work

On the British side, the exfiltrations know their “last hours”, estimated Prime Minister Boris Johnson. But London will move “heaven and earth” “to help” get Afghans out of asylum seekers, he said.

As a rival of the Taliban, IS is responsible for some of the bloodiest attacks in Afghanistan in recent years and could use the current uncertainty to succeed.

The French President Emmanuel Macron called on Saturday not to abandon the IS before a regional conference in Baghdad, which will focus on Afghanistan in particular and at which the Iranian and Saudi foreign ministers are also expected. and King Abdullah II of Jordan.

Especially those who have worked with foreigners or the ousted pro-Western government in recent years fear being silenced or even harassed, and have fed the flood of many exit candidates.

Women have “the innate right” to work, said Sher Mohammad Abbas Stanikzai, a former Taliban negotiator at the Doha peace talks, for confidence. “You can work, study, get involved in politics and do business,” he said on Friday at a press conference.

UN Secretary General Antonio Guterres has convened the permanent members of the Security Council for a meeting on Monday on the situation in Afghanistan.

Objection to the health passport | Another weekend of protest in France