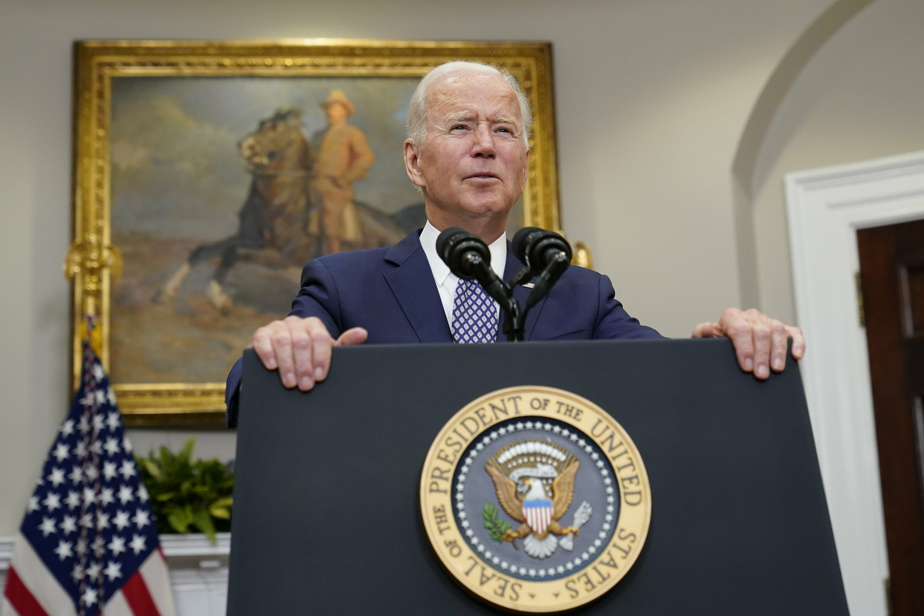 “This is a time that requires strong, stable, and consistent leadership. We need someone who has proven himself and who has the trust of the whole world, “said the voice-over with reference to the years of the Democratic candidate for the Vice President of the United States and the head of the Senate Foreign Affairs Committee.

But what will remain of this confidence when the last American soldiers have left Afghanistan?

And what remains of Joe Biden’s credibility with his fellow citizens after the traumatic scenes that have increased around the airport in Kabul since the lightning takeover of the Taliban?

The 46th American President was elected in part because of this international experience, which he was proud of during his campaign, and no doubt hopes to regain control. But any of his decisions can still backfire, including not postponing the withdrawal of US troops from Afghanistan beyond the scheduled August 31st date.

Joe Biden on Tuesday reiterated his decision not to postpone the withdrawal of US troops from Afghanistan beyond the scheduled August 31st.

The move will appeal to the Taliban, who have warned the US government not to delay the GI’s withdrawal. But it appalled the United States’ allies. Tuesday morning, during a virtual G7 meeting, they asked Joe Biden to hold American soldiers at Kabul airport beyond August 31 so that evacuations could continue.

The head of the White House denied this request.

“We are currently well on the way to completing our mission by August 31,” he said in a short speech on Tuesday afternoon, stressing that he had asked the military to draw up “contingency plans” in case the Taliban fail to cooperate.

This statement could ultimately be refuted by reality, like several others that the US administration has made on Afghanistan. In that regard, Joe Biden is perhaps the biggest culprit. Because if his credibility is in jeopardy today, it is mainly due to his own contradicting, erroneous or misleading messages.

“The idea that there is somehow a way out [de l’Afghanistan] without causing chaos, I don’t know how that would be possible, ”said the president on August 18 in an interview with ABC.

However, Joe Biden had never before raised the possibility that the withdrawal of American troops could be accompanied by chaos.

US soldiers stand guard while Afghans sit near the military section of Kabul airport on August 20.

“We will do this responsibly, thoughtfully and safely,” he said on April 14, announcing his intention to end the nearly 20-year war in Afghanistan, a message he repeated on July 8.

On the same day, he denied that the Taliban takeover was “inevitable”. And he added, rejecting the possibility of repeating the humiliating evacuation of the US embassy in Saigon in 1975: “There will be no circumstance in which people will be lifted from the roof of the house. US embassy in Afghanistan.”

After the takeover of the Taliban, which according to US intelligence services was actually inevitable, Joe Biden made several other questionable statements.

On August 20, he stated in particular that the terrorist organization Al-Qaeda was no longer present in Afghanistan, a falsehood. And he said he had “seen no questioning of our credibility by our allies around the world”.

In Great Britain, Germany and Latvia, among others, leading politicians have used the terms “chaos”, “catastrophe” and “debacle” to describe a situation which, according to one of them, “is the political and moral credibility of the West”.

Joe Biden is obviously not the only one who has voiced falsehoods about Afghanistan. Some of its harshest critics have themselves helped to justify or shape America’s futile or catastrophic policies in that country since 2001.

Even honest and courageous journalists sometimes missed the mark. “I’ve been sitting here at the airport for 12 hours, 8 hours at the airfield and haven’t seen a single American plane take off. How the hell are you going to evacuate 50,000 people in the next two weeks? That can’t happen, ”CNN reporter Clarissa Ward tweeted on August 20.

A woman hauls a suitcase with a child on it during an evacuation operation at Kabul International Airport.

But not only the US allies want US soldiers to stay at Kabul airport beyond August 31.

On both the Democratic and Republican sides, MPs argue that the evacuation of all Americans from Afghanistan will take longer than this deadline allows.

Joe Biden cited the threat of terrorist attacks in his White House speech to justify his decision to withdraw American troops from Kabul as soon as possible. According to him, the threat comes from the branch of the Islamic State Group in Afghanistan.

He did not state how many American civilians or Afghan partners still need to be evacuated. He said US Secretary of State Antony Blinken would provide information on Wednesday.

Some of his credibility – or what remains of it – will depend on how many he leaves behind.

Mexico | Hurricane Grace turns into a tropical storm on land