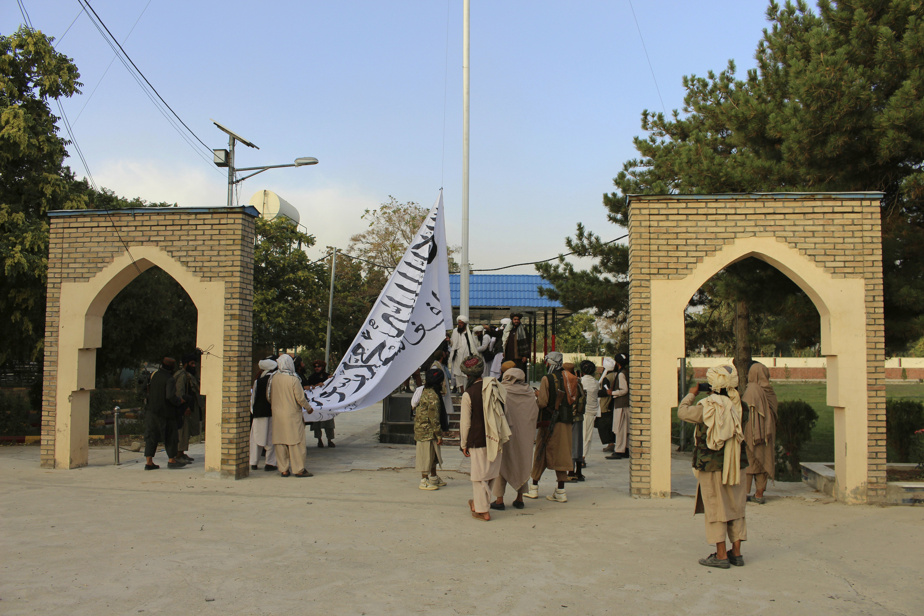 (Kabul) The Taliban announced on Sunday that they had invaded many neighborhoods in Kabul, while three of their senior officials told AFP that after the head of state, the insurgents had also captured the presidential palace.

According to television material, dozens of Taliban fighters have captured the presidential palace in Kabul and claimed victory over the Afghan government.

“Our country has been liberated and the mujahideen are victorious in Afghanistan,” an insurgent in the palace told Al Jazeera television. Fighters occupied the building after President Ashraf Ghani fled abroad, who admitted that the Taliban had “won”.

A senior official told AFP that a security meeting is being held in the Afghan capital.

“The Islamic Emirate orders all of its armed forces to wait at the gates of Kabul,” said Taliban spokesman Zabihullah Mujahid for the first time on Twitter.

He then specified that they were allowed to enter the areas of the capital deserted by the Afghan army in order to maintain order. The Taliban also promised not to take revenge on anyone, including soldiers or officials who served for the current government.

Interior Minister Abdul Sattar Mirzakwal urged the Afghans “not to worry”, he assured them that there would be a “peaceful transfer of power” to a transitional government.

An Afghan soldier in Kabul

Insurgent spokesman Suhail Shaheen confirmed to the BBC that a peaceful transfer of power is expected “in the coming days”. “We want an inclusive government” […] which means that all Afghans will be there, ”he assured.

In just 10 days, the Taliban, who launched their offensive in May when the final withdrawal of American and foreign troops began, took over almost the entire country.

The defeat is total for the Afghan security forces, but financed with hundreds of billions of dollars from the US for 20 years, and for the government of President Ghani, whose resignation seems inevitable.

Taliban in a van in the streets of Jalalabad

The head of state called on the security forces to ensure the “security of all citizens”. “It is our responsibility and we will do it in the best possible way. Anyone who thinks of creating chaos or looting will be treated with violence, ”he said in a video message.

The Taliban recently took control of two prisons near the capital and released thousands of prisoners, and authorities feared criminals would disrupt public order.

Faced with the collapse of the Afghan army, US President Joe Biden has increased the military effort at Kabul airport to 5,000 soldiers to evacuate American diplomats and Afghan civilians who have cooperated with the US and fear for their lives.

The Pentagon estimates the total number of people to be evacuated at around 30,000. As on the previous day, the American helicopters continued their incessant rotations on Sunday between the United States Embassy, ​​a gigantic complex in the ultra-fortified “green zone” in the center of the capital, and what is now the only airport. 1. Way out of the country.

A US Chinook helicopter flies over Kabul

The US embassy has ordered its employees to destroy sensitive documents and US symbols that could be used by the Taliban for “propaganda purposes”.

London also announced the relocation of 600 soldiers to help British nationals leave the country. Several Western countries will reduce their presence to the bare minimum or even close their embassies temporarily.

However, Russia said on Sunday it had no plans to evacuate its embassy and work towards an emergency UN Security Council meeting.

The US president threatened the Taliban with a “quick and strong” response in the event of an attack that would endanger US citizens during the evacuation operation.

But he also defended his decision to end 20 Years of War, America’s longest, despite criticism from the Republican opposition.

“One or five more years of American military presence would have made no difference if the Afghan army cannot or does not want to defend its own country,” he said.

At most banks there was a huge rush to see people wanting to withdraw their money while there was still time. The streets were also filled to the brim with vehicles trying to leave town or take refuge in an area people believed was safer.

Passengers will go to the departure terminal of Hamid Karzai Airport in Kabul on August 15.

In the Taimani district, in the center of the capital, there was fear, uncertainty and incomprehension on people’s faces.

“We welcome the return of the Taliban to Afghanistan, but hope that their arrival will lead to peace and not bloodshed. I remember the Taliban’s atrocities when I was a kid, very young, ”said Tariq Nezami, a 30-year-old trader.

There were signs that people were already resigned to changing their lives. On Sunday, for example, a worker in a district of Kabul painted the billboard of a beauty salon showing a glamorous bride.

Many Afghans, especially in the capital, and especially women who are used to the freedoms of the last 20 years, fear a return of the Taliban to power.

When they ruled the country between 1996 and 2001, they enforced their ultra-rigorous version of Islamic law.

Thieves’ hands were cut off, murderers were publicly executed, and homosexuals were killed.

The Taliban, who are now looking for a more moderate image, have repeatedly promised that if they return to power they will respect human rights, especially those of women, in line with “Islamic values”.

But in the newly conquered territories they have already been charged with many atrocities: in particular the murder of civilians, beheadings, kidnapping of teenage girls in order to forcibly marry them off.

Yemen | A “currency war” makes life difficult for the population, which has already been hit hard