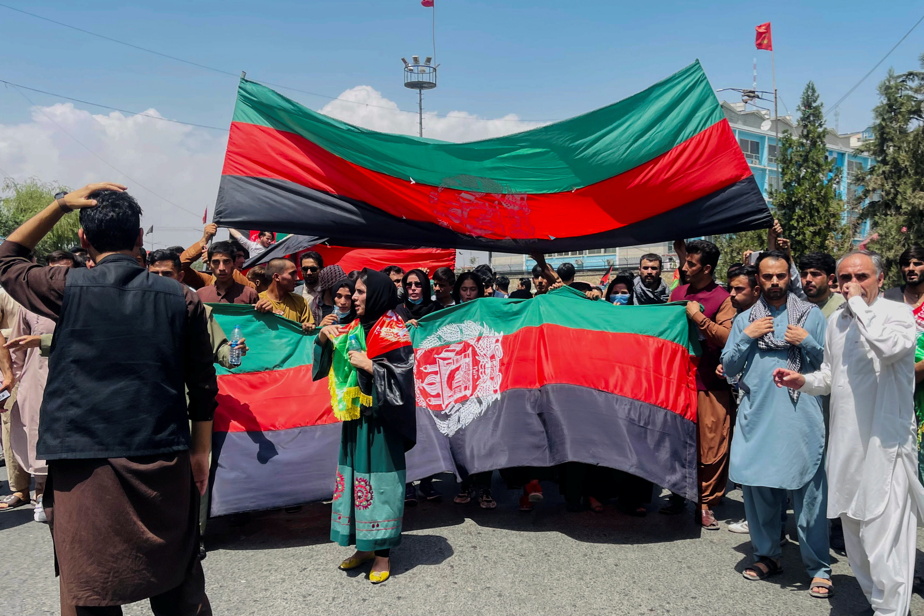 (Kabul) Protesters defied the Taliban in the streets by waving the national flag on Thursday, the 102nd anniversary of Afghanistan’s independence, while the son of the late Commander Massoud called for resistance to the Islamists.

Since the Taliban took over the capital on Sunday after the government troops collapsed after a 20-year war against the US and NATO, thousands of people have continued to crowd into Kabul airport.

In Kabul, people are waving Afghan flags, a gesture of defiance against the Taliban.

In Asadabad (east) and several places in Kabul, Afghans waved the black, red and green national flag on Thursday and defied the Islamists who imposed their white and black flags on public buildings.

In Kabul, a small demonstration passed a delivery truck of Taliban fighters, which examined it carefully before it finally passed on their way, AFP found. A protester called on “the international community” to prevent “the destruction of 20 years of progress”.

A similar rally on Wednesday in Jalalabad (east) was broken up with gunfire.

The Taliban, for their part, spoke of “great pride for the Afghans that their country is on the verge of regaining independence after the American occupation”.

The new regime ordered the release of “all political prisoners” on Twitter on Thursday […] without restriction or condition ”.

In political consultations, a government was quickly formed for which “all parties” would be contacted, said spokesman Zabihullah Mujahid.

Moscow hopes that these negotiations will lead to a “representative government”.

The Taliban pretended to be more moderate than before, saying they had forgiven “all former government officials.”

But according to a confidential UN report, Islamists are actively looking for people who have worked with foreign forces.

“We assume that people who have worked for US and NATO armed forces and their allies, as well as their family members, will be threatened with torture and execution,” said Christian Nellemann, director of the center reports to UN agencies.

According to the report, the insurgents, armed with “priority lists”, searched people going to Kabul airport and set up checkpoints in major cities in the country.

Ahmad Massoud, son of the most famous opponent of the Taliban and the Soviets, Commander Ahmed Shah Massoud, who walked in (his) father’s footsteps on the 9th ”.

Soldiers who are “disgusted by the surrender of their commanders” are said to have joined it from its Panchir Valley (northeast of Kabul), the last region not controlled by the Taliban. In an article published in the Washington Post, he asked for guns and ammunition in the US and begged, “You are our last hope.”

Trapped between Taliban checkpoints and the barbed wire installed by the US military at the airport, the only exit in the country, thousands of Afghan civilians were still hoping for an escape flight.

A young national youth football player, Zaki Anwari, died on Monday while attempting to catch an American plane taking off, the Afghanistan Directorate-General for Physical Education and Sport announced.

“I drove to the airport with my children and family […] The Taliban and the Americans shot, ”said a man who worked for a foreign NGO. “Even so, people moved forward because they knew that outside the airport they would face a fate worse than death.”

Unconfirmed social media posts claim several people were killed when US and Taliban forces tried to contain the desperate crowd.

Many Afghans also beg to be evacuated near embassies but cannot enter them.

“I spoke to my friend who is there. He has a letter from the Spaniards stating that he can go with them, but when he tries to reach the door (of the embassy) he is threatened to shoot him, “said a man on condition of anonymity.

The G7 and several UN organizations have called on the Taliban to allow Afghans and foreigners willing to leave the country to travel safely.

While the State Department sent the same message, the Pentagon instead hinted that the situation was improving. “We have evidence this morning (Thursday) that the process is working,” said spokesman John Kirby.

The United States dispatched 6,000 troops to secure the Kabul airport and remove approximately 30,000 Americans and Afghans. According to the Pentagon, they have evacuated more than 7,000 people since Saturday.

Many other countries, including many Europeans (Spain, France, Great Britain, etc.) are also carrying out evacuations.

Zabihullah Mujahid on Tuesday promised “many differences” in the governance of the Taliban from 1996 to 2001 until they were overthrown by a US-led coalition after the 9/11 attacks.

Back then, they had enforced an ultra-rigorous version of Islamic law. Women could not work or study, and thieves and murderers were severely punished.

Mistrust remains among many Afghans and the international community.

Journalists – four of whom were searched – and former employees of Western organizations and embassies say they were shocked.

“If the world hears me, please help us because our lives are in danger,” said journalist Shabnam Dawran on Thursday in a video on the Internet. “Male employees” were able to enter the premises of his news broadcaster, “but I was told that I could no longer perform my duties because the system had changed”.

Internationally, Afghanistan’s new masters appear to be less hostile than they were two decades ago.

They stated that they wanted to establish “good diplomatic relations” with all countries, but that they refused to interfere with their religious principles.

Before that, China, Russia, Turkey and Iran had given signals to open. Western countries in particular, Germany, the USA, France and Great Britain, are waiting to be judged “by actions”.