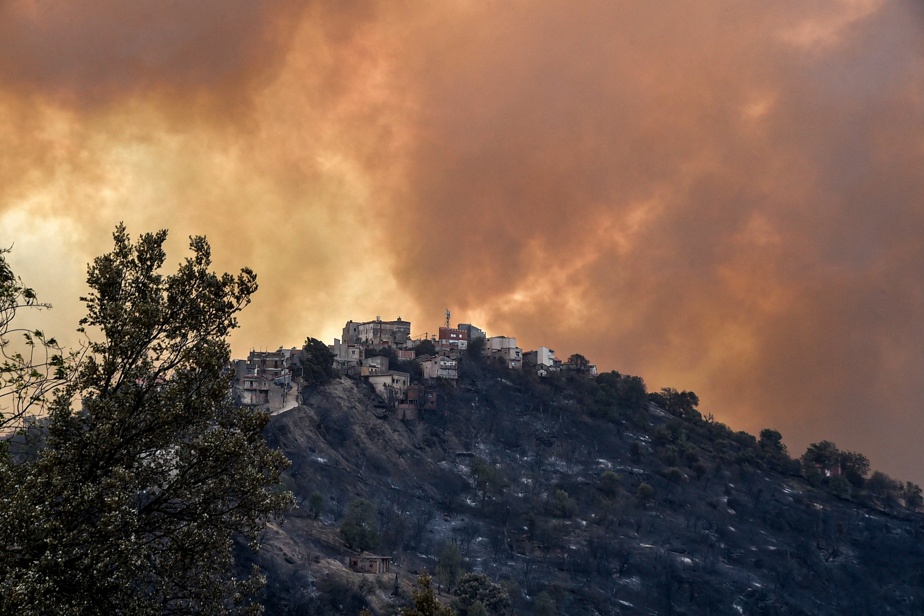 (Tizi-Ouzou) At least 69 people were killed in the fires in northern Algeria, dozens of those fires exacerbated by the extreme heat and desperate against the firefighters, soldiers and volunteers on Wednesday.

According to official information, at least 28 soldiers and 37 civilians were killed in these fires, which broke out on Monday evening in Kabylia, particularly in the Tizi Ouzou region.

At the end of the afternoon, the official APS agency reported four more dead, without saying whether they were civilians or soldiers.

And 20 people were missing on Wednesday, as the French-language news site Tout sur l’Algerie (TSA) announced.

According to civil protection spokesman Nassim Barnaoui, 69 fires were still active in 17 Wilayas (prefecture) on Wednesday, particularly in Tizi Ouzou, which recorded the most human casualties.

“I left all my belongings in my village and fled to town with my wife and three children,” Abdelhamid, a merchant from Beni Yeni village, told AFP. “Luckily I have an apartment in the center of Tizi Ouzou. ”

Four people died in the neighboring province of Béjaïa on Wednesday, APS reported, citing a local civil protection officer. The latter had reported the “outbreak of nine major fires” the day before.

Since Tuesday, calls for relief supplies – food, water, medicine – to be sent to the residents of the affected villages have been increasing on social networks.

French President Emmanuel Macron announced on Wednesday that it would send two Canadair and one command aircraft to fight the fires.

In France, the diaspora and NGOs are also mobilizing to send equipment to disaster areas through local organizations, as they did for shipping oxygen cylinders at the height of the COVID-19 epidemic.

According to the APS, Algeria has also reached an agreement with the European Union (EU) on the charter of two water bombers, which are to be used from Thursday.

Neighboring Morocco, which is in tension with Algiers, has also agreed to help Algeria.

The criminal lead was mentioned by the Algerian authorities.

The public service broadcaster announced on Tuesday the arrest of three “arsonists” in Médéa. A fourth was arrested in Annaba, according to APS.

Prime Minister Aïmène Benabderahmane spoke of more than 70 fires in 18 wilayas in the north of the country.

The worst tragedy occurred on Tuesday, when 28 soldiers were killed while evacuating villagers threatened by flames in the mountains of Bejaïa and Tizi Ouzou.

The north of Algeria is hit by forest fires every year. In 2020, almost 44,000 hectares of coppice forest went up in smoke. The authorities had announced that they had arrested several arsonists.

This phenomenon intensifies as fires multiply on the planet. The rise in temperature, the increase in heat waves and the decrease in precipitation in places are an ideal combination.

In the Maghreb, according to various weather services, an extreme heat wave with temperatures of 46 degrees will last until the weekend.

In neighboring Tunisia, the capital Tunis broke its all-time record on Tuesday with 49 degrees. According to Moez Triaa, spokesman for civil protection, around fifteen outbreaks of fire were registered in the north and northwest, which did not claim any victims.

On the north coast of the Mediterranean, Greece and Turkey have been the hardest hit countries in the past two weeks with a spate of fires that killed eight people on Turkish coasts and three in Greece.

Global warming | Historic heatwave in Greece, the Balkans and Turkey