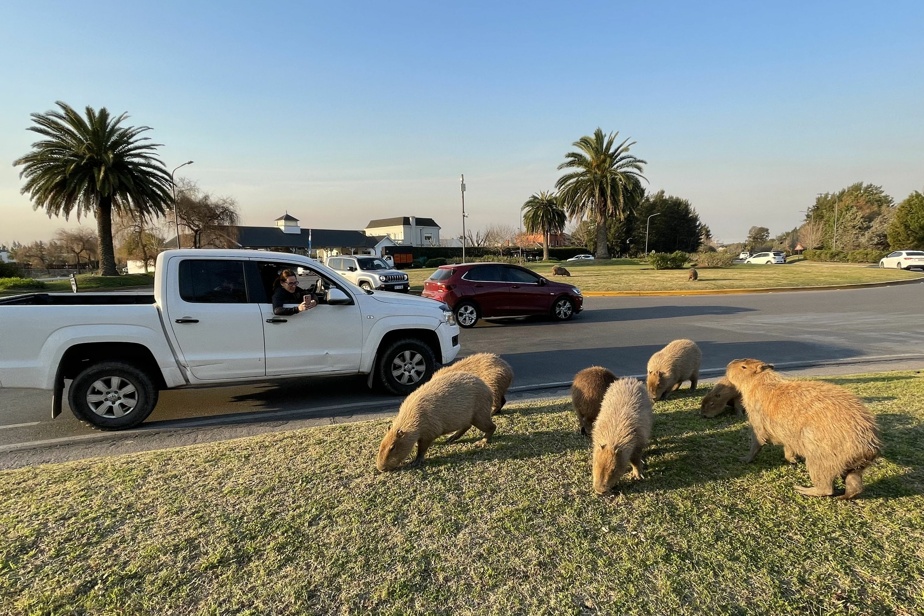 (Buenos Aires) The manicured gardens and well-tended flower beds of the affluent private district of the North Delta on the outskirts of Buenos Aires are the prey of hordes of Cabiais, imposing rodents from South America who were driven from their territory by real estate waste.

Its proliferation sparked a passionate debate in Argentina about environmental protection and inequalities in the country where 42% of the population are considered poor.

A true “closed” city, with its individual houses, each with a swimming pool, its sports facilities, its places of worship and its schools, North Delta boasts of offering “the tranquility of nature and the comforts of the city” to its affluent residents Security and social homogeneity, with its segmented neighborhoods and private security guards.

The north delta, built 20 years ago, was built on the swampy areas at the mouth of the Parana River, which flows into the Rio de la Plata north of Buenos Aires.

The complex now covers 1,600 hectares, where once peaceful families of Cabiais, these water pigs also called Capybara (Hydrochoerus hydrochaeris), the largest rodent in the world weighing up to 80 kg, waded peacefully.

“The capybaras have always been there. We saw a few now and then. But three or four months ago they did [les promoteurs immobilier] attacked their last refuge, which caused the onslaught, ”explains Perla Paggi, a neighbor of the northern delta, who advocates the preservation of these herbivorous mammals.

The clearing of the only remaining virgin land to build a private clinic has driven hundreds of families who have invaded the upscale neighborhoods.

“We have to learn to live with them, they are not aggressive animals. They are defenseless, we lock them up, we rob them of their habitat and now we are complaining because they attack us, ”says Ms. Paggi, who pleads for the establishment of a“ reserve of 20 or 30 hectares to preserve diversity ”. .

“Nordelta was a very rich wetland area that should never have been touched. But now that the damage has been done, the neighbors have to achieve a certain level of coexistence with the capybaras, ”adds biologist Sebastian di Martino, director of nature conservation at the Rewilding Argentina Foundation.

“But it’s not that simple,” he warns, believing that creating a reserve will not be enough to curb the growing population, a female can produce a litter of six cubs each year.

“They should be kept away from children and pets. And we have to find a way to regulate their population, maybe by moving them to other places, ”explains Mr Di Martino.

While waiting for a solution, the Cabiais have become a photographic attraction in the North Delta and a talking point in Argentina.

Social networks are full of self-portraits and memes, some cheering on a new “class war” with the Cabiais who are coming to reclaim their land that has been usurped by the wealthy people of the North Delta.

Under the hashtag “#carpinchosvsChetos” (the Cabias against the bourgeoisie), a photo montage of a Cabiais with the inscription “Capital” by Karl Marx was widely distributed.

Northern Delta residents post videos of traffic accidents caused by dangerous crossing of the streets of Cabiais, photos of overturned trash cans, or even of a dog that appears to have been bitten by the semi-aquatic animal.

The multiplication of Cabiais is not a specific problem for the northern delta, but also for “many regions of the country, whether urbanized or not,” notes the biologist.

Sebastian di Martino points to “the change and degradation of ecosystems” that “have wiped out many species that were their natural enemies”.

Cabiais is a delicacy of choice for jaguars, pumas, foxes, dogs, and wild cats, but their populations are nearly extinct in Argentina.

“Without a predator that regulates its population and also creates fear,” the Cabiai “no longer hides and spends the whole day eating,” he notes.

A trend reversal for this species that was threatened by intensive hunting 20 years ago.

“Their skins were very popular for furs … but that fashion is gone,” says Mr Di Martino.

Elections in Germany | Death among those close to Merkel

Afghanistan | At least five dead in the explosion in Kabul

Lavrov: Military contact from Mali – hope for a solution to Iran |