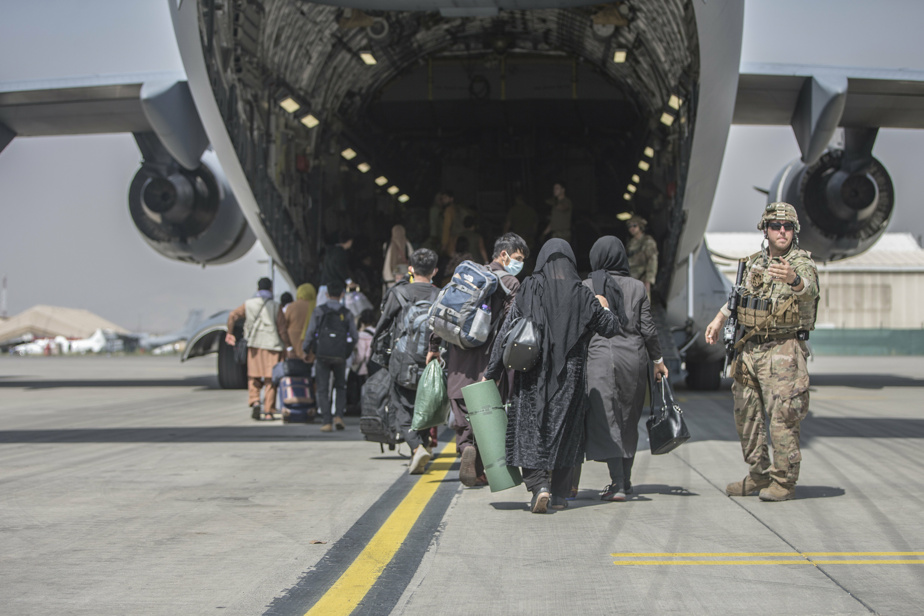 (Kabul) There is a race against time at Kabul Airport to urgently evacuate as many foreigners and Afghans who want to flee Afghanistan as possible before August 31, a deadline set by the Taliban for the departure of American forces.

Since the Taliban on Jan.

Early on Monday the Bundeswehr announced the death of an Afghan security guard in clashes with strangers, while German and US soldiers took part in “later exchanges of fire”.

The Taliban have warned that they will not agree to an extension of the evacuations beyond August 31, a date set by the US for the final withdrawal of their troops from Afghanistan. US President Joe Biden, under pressure from his allies, opened the door to keep soldiers there beyond that date.

“If the United States or the United Kingdom is asking for more time to evacuate, the answer is no. Or there will be consequences, ”replied Taliban spokesman Suhail Shaheen.

Germany announced on Monday that it would speak to the US, Turkey and other partners about closing Kabul Airport after Dec.

To expedite the evacuation, the US is seizing aircraft from private companies that do not take off from Kabul but are helping with transport to third countries such as Qatar and the United Arab Emirates.

Thousands of people have already been exfiltrated aboard planes dispatched by Western countries to evacuate their nationals, diplomatic staff and Afghan nationals who worked with them and their families.

The White House announced on Monday that around 11,000 people have been evacuated from Afghanistan via Kabul Airport in the last 12 hours, and 53,000 since July.

“The Americans want to get 60,000 people out by the end of the month. It is mathematically impossible, ”said the head of European diplomacy Josep Borrell on Saturday.

“We think we have until August 31st (August) to make all Americans who want to leave,” said White House National Security Advisor Jake Sullivan on Monday.

The Taliban accused Washington on Sunday of being responsible for the chaos at the airport. “It has to end as soon as possible,” said senior Taliban official Amir Khan Mutaqi.

The role of the Gulf States

According to the Gulf State, more than 7,000 people have been evacuated from Afghanistan to Qatar. The emirates say they have made it easier for 8,500 people to leave the country with their own planes or via their airports.

According to the US ambassador to Kuwait, the country allowed the evacuation of 850 American citizens and diplomatic personnel in the US on Sunday.

Bahrain’s national airline Gulf Air has announced a commercial flight from its Isa Air Base to Washington.

In addition, Jordan has approved the passage of 2,500 Afghans exfiltrated from Kabul through its territory to join the United States.

Germany took almost 3,000 people of 38 nationalities on board on 21 flights.

The United States also organized the evacuation of approximately 5,000 people to their military base in Ramstein, Germany.

Italy exfiltrated around 1,990 Afghan civilians in less than a week and intends to take in an additional 1,300 people who are currently awaiting evacuation at Kabul airport.

France, where a seventh plane from Kabul landed overnight from Sunday to Monday, evacuated around 100 French, around 40 foreigners and more than 1,000 Afghans.

Denmark helped 650 people leave the country, including at least 45 Afghans and their families. More than 350 people have already arrived in Poland.

The planes of the Belgian military operation made it possible to evacuate “around 700 people” at the time, said Belgian Defense Minister Ludivine Dedonder on Monday evening. There are Afghans, Belgians, but also Dutch and Danes.

At this point in time, Spain took in 710 evacuees. The country is now also serving as a transit country for the evacuation of collaborators from the US via its bases in Rota and Moron in Andalusia (south) and will in this context take in 4,000 Afghans “for a period of 15 days,” Defense Minister Margarita Robles said on Monday .

Sweden evacuated more than 170 people, including 68 who worked for its army and had residence permits.

Switzerland, from where a 300-seater plane flew to Tashkent on Monday to transport evacuees from Kabul to Uzbekistan, has already taken in around 100 people, including at least 11 Swiss and Afghans with their families.

Russian President Vladimir Putin called on Sunday to prevent the influx of Afghan refugees, who could include “fighters in disguise”.

“But who can be (hidden) among these refugees, how can we know? “, he said.

The Greek Prime Minister Kyriakos Mitsotakis called on the EU to “support countries near Afghanistan in order to ensure that no further flows of refugees arrive in Europe”.

Turkish President Recep Tayyip Erdogan said on Sunday that Turkey could “not assume the responsibility of third countries” to take in the Afghans who are now threatened after they had worked for Western institutions.