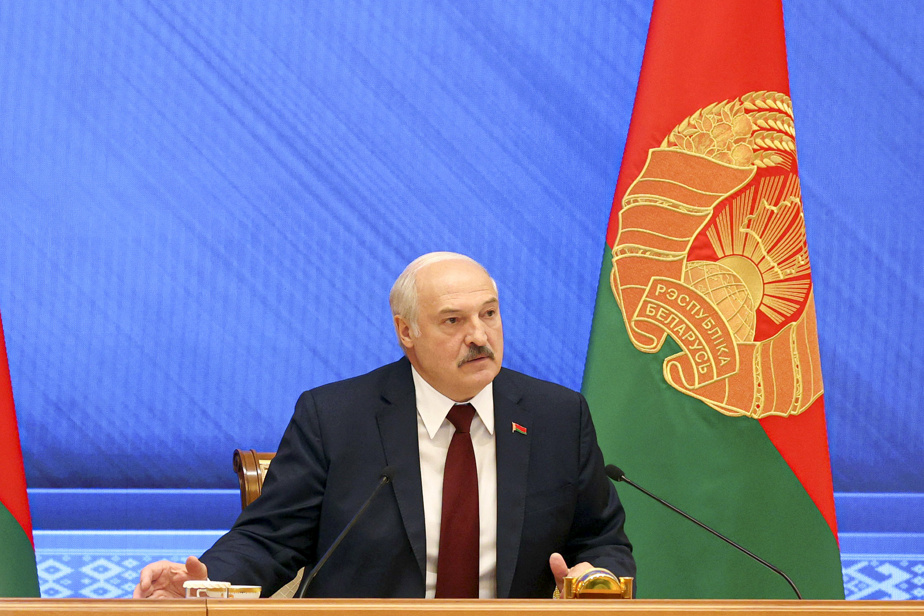 (Moscow) The Belarusian president was adamant about his critics on Monday and denied any repression in his country when Washington announced a new round of sanctions against Minsk.

A year to the day after his re-election was rejected, Alexander Lukashenko also denied any involvement in the suspected death of an opponent who had fled in Ukraine and accused a Belarusian sprinter of having “run from a distance” from Warsaw after she claimed she was the victim of one attempted forcible repatriation from the Tokyo Olympics.

A photo by Vitali Chychov

At a televised meeting with the press and regime dignitaries, he made incoherent remarks that the year had been “not easy” and again accused his opponents of wanting to instigate a “rebellion”.

When asked about the mass arrests and liquidations of the media or NGOs, Lukashenko rejected the term repression.

“There is no repression in my country and there never will be […] I don’t need them, ”he said, accusing the opposition of being agents of“ American special services ”.

For its part, the United States on Monday announced a wave of sanctions against personalities, companies and corporations of Belarus. “The actions of the Lukashenko regime are an illegal attempt to stay in power at any cost,” said US President Joe Biden.

Britain also tightened its sanctions against Belarus on Monday, targeting key oil and fertilizer industries “in response to repeated attacks on democracy and human rights” by the Belarusian regime.

Canada also announced, “in solidarity” with its international partners, new sanctions against the most important sectors of the Belarusian economy.

The 2020 election campaign had seen an unexpected mobilization of throngs of Belarusians around surprise candidate Svetlana Tikhanovskaya, who had temporarily replaced her imprisoned husband and then united all opposition currents behind her, taking power to all other rivals from the Belarusian president.

But at the end of the election on August 9, Alexander Lukashenko was declared the winner with more than 80% of the vote. This result sparked a historic protest movement in this former Soviet republic, which has been ruled with an iron fist by its authoritarian president since 1994.

Ms. Tikhanovskaya was forced into exile and became her family’s representative abroad. It is received by all Western leaders, especially the American President last July.

On Monday she decided that the Belarusian regime had become “terrorist” and warned from Lithuania: “We will not stop […] We will continue the struggle to free ourselves from the fear that grips our country.

The power in Minsk has never sought dialogue with its opponents.

In 2021, when the European Union and the United States tightened sanctions against the regime, repression extended to the media and NGOs.

Minsk is also accused of hijacking a commercial flight in May to arrest an opponent, thereby causing major airlines to bypass their airspace.

When asked about two recent scandals – the suspicious death by hanging opponent Vitali Chychov in Ukraine last week and the case of Olympic athlete Krystsina Tsimanouskaya – Lukashenko dismissed suspicions about his regime.

“Chychov, but who is it for me or for Belarus?” […] There is no one for us, who would have gone to hang him? He started. As for the sprinter, who was threatened and fled to Poland after criticizing her sports authorities, “she was led by her Polish buddies”.

For her part, the sprinter said she wanted every Belarusian citizen to “lead a normal life and no longer be afraid,” in an interview with AFP.

Supported by Russia, Alexander Lukashenko has repeatedly called his opponents the stooge of the West who, in his opinion, wants to overthrow his regime in order to be able to attack Moscow and Russian President Vladimir Putin.

“We’ll never get on our knees!” “He said on Monday and advised Westerners to” calm down “.

“You risk starting World War III!” »Warned Lukashenko. “Do you want to urge us and the Russians to do so?” “.

In Minsk, the power critics fell like leaden rubble. Due to the repression, demonstrations have ceased to take place when they gathered tens of thousands of people less than a year ago.

On the occasion of the first anniversary of the anti-Lukashenko protests, assemblies of Belarusians are taking place abroad, in Poland and in Ukraine, where many dissidents have sought refuge.

Laschet in Not: “Future Team” should turn things around |