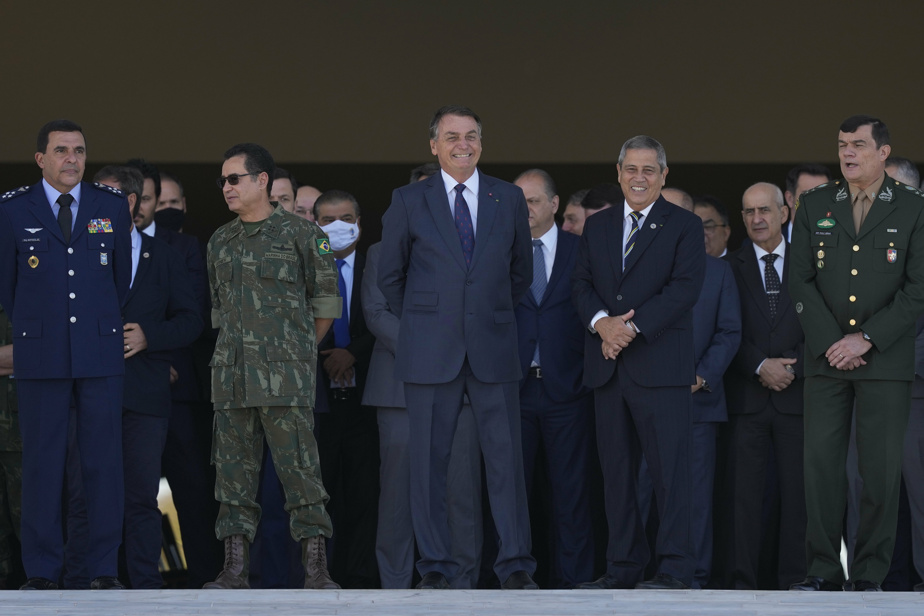 (Brasilia) Jair Bolsonaro took part in an unprecedented military parade in Brasilia on Tuesday, an attempted show of force and intimidation by a president that has been the subject of multiple investigations and whose popularity has melted, analysts say.

The far-right president took part in the parade in a climate of acute crisis as the Supreme Court and Higher Electoral Court (TSE) opened investigations into him following his repeated attacks on the electoral system.

Flanked by the Chiefs of the Army, Air Force and Navy and several ministers, including the Secretary of Defense, Jair Bolsonaro followed the parade of a convoy of tanks and armored vehicles in front of the Palace of Planalto, the seat of the Presidency.

Officially, the ceremony was supposed to present the head of state with an invitation to an annual military exercise since 1988, 80 km from the capital in Formosa in the state of Goias.

However, analysts pointed out that this was the first time since the return of democracy to Brazil in 1985 that a parade of armored vehicles and other military vehicles took place in front of the three power headquarters in the capital.

This initiative was interpreted as an attempt at a show of power at a time when the popularity of the former captain of the army is falling sharply and is being investigated against him in particular for “spreading false information” in the electoral system.

For Mauricio Santoro, professor of political science at Rio State University (UERJ), Bolsonaro is “using this parade of armored vehicles to intimidate the Supreme Court and Parliament”.

He wanted to “show that the armed forces are on his side and support his demands, even the most controversial, such as a return to paper voting rights,” he told AFP.

The involvement of the armed forces in “political maneuvers” Bolsonaro has been unprecedented since the end of the dictatorship, he adds.

During the roughly ten-minute parade, a small crowd of his supporters gathered in front of the presidency, some showing signs calling for military intervention to “save Brazil”.

“Bolsonaro rules very well and the military is part of his government,” retired Marissa Soares Gil told AFP. “I don’t feel any fear or panic, on the contrary, I support the armed forces, they protect us from enemy forces.”

“The Fragility of a President”

But this parade comes at a time when MPs must consider a proposal for a constitutional revision that would change the electoral system, which Bolsonaro said led to fraud and robbed him of the first-round victory in 2018.

Bolsonaro, like the Navy, denied any connection between the parade they organized and these debates.

Increasingly discredited, especially by his management of the coronavirus pandemic, Bolsonaro wants to stand for re-election in 2022, but the polls promise him a serious defeat against his archenemy, the former left-wing President Luiz Inacio Lula da Silva.

In recent weeks, the head of state has countered increasing allegations of electoral fraud with the current electronic voting system. He attacked the Supreme Court and TSE judges.

Without questioning the electronic voting system, which has been in force in Brazil since 1996, it requires the printout of a proof of voting on paper so that the ballot papers can be recounted in the event of a dispute.

Over the past weekends, he has mobilized thousands of demonstrators in the streets of major Brazilian cities to address this issue. While threatening to act “outside the constitution”.

Bolsonaro’s government is also on the grill of a Senatorial Commission of Inquiry (ICC) because of its management of the tragic coronavirus pandemic (564,000 dead) and is suspected of corruption.

ICC head Senator Omar Aziz saw “a pathetic scene” in the parade on Tuesday, highlighting “the fragility of a president surrounded by anti-corruption investigations”.

For the first time in seven months: Biden and Xi are on the phone |

TikTok surpasses Facebook and becomes the most downloaded application on mobile –