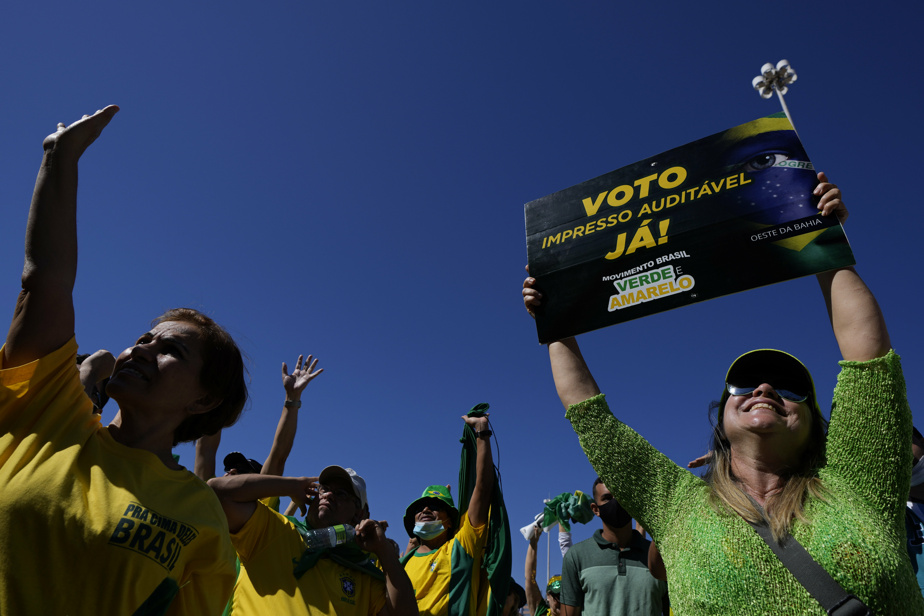 (Rio de Janeiro) Several thousand demonstrators gathered in Brazil on Sunday to support President Jair Bolsonaro and to protest against the electronic voting system that has been in place since 1996, AFP journalists noted.

In Rio de Janeiro, around 3,000 people marched on the famous Copacabana Beach, most of them without masks and dressed in yellow and green, the colors of the Brazilian flag.

“We want that the votes can be counted publicly, for more transparency, because there was already suspicion of fraud,” said Ronaldo Calvalcante, 46, who demonstrated in Rio.

President Bolsonaro, who is aiming for re-election in 2022, is not calling for a return to ballot voting, but for a receipt to be printed out on the electronic ballot box after each vote so that the votes can be physically recounted.

For analysts, the far-right leader, like former US President Donald Trump, whom he passionately adores, is trying to prepare the ground for questioning the outcome in the event of defeat.

President Bolsonaro did not take part directly in the demonstration, which was attended by several thousand people in Brasilia that morning, but gave a speech via videoconference and affirmed that he would not accept elections that were not “clean and democratic”.

In Rio de Janeiro, around 3,000 people marched on the famous Copacabana Beach, most of them without masks and dressed in yellow and green, the colors of the Brazilian flag.

He added that he would do “whatever is necessary” to have paper receipts printed for electronic voting.

In the afternoon he also spoke in front of the thousands of demonstrators who had gathered in Sao Paulo, the largest metropolis in the country.

“The will of the people must prevail. I hope it takes place after this demonstration in Brasilia, ”he said, referring to the vote planned for Thursday in the Chamber of Deputies Committee on a bill to introduce paper receipt printing for electronic ballot boxes.

On Thursday, during his weekly live appearance on Facebook, the head of state reported for more than two hours about his conviction for fraud in the last two presidential elections, particularly estimating that he should have been elected in the first round of 2018.

But he has provided no evidence, while the Superior Electoral Tribunal (TSE) ensures that the current system is completely transparent and has never been riddled with irregularities.

Bolsonaro had already caused a stir three weeks ago by sowing doubts about the realization of the 2022 ballot: “Either we will make ordinary elections in Brazil or there will be no elections,” he said.

He had called the president of the TSE, Luis Roberto Barroso, a “fool” who believes that printing paper receipts could, on the contrary, “expose the vote to the risks of tampering in the past.”

Last weekend, tens of thousands of people demonstrated in Brazil to demand the impeachment of President Bolsonaro, who was widely criticized for his handling of the COVID-19 pandemic, which killed more than 550,000 people in the country.

200 companies targeted by a cyber attack