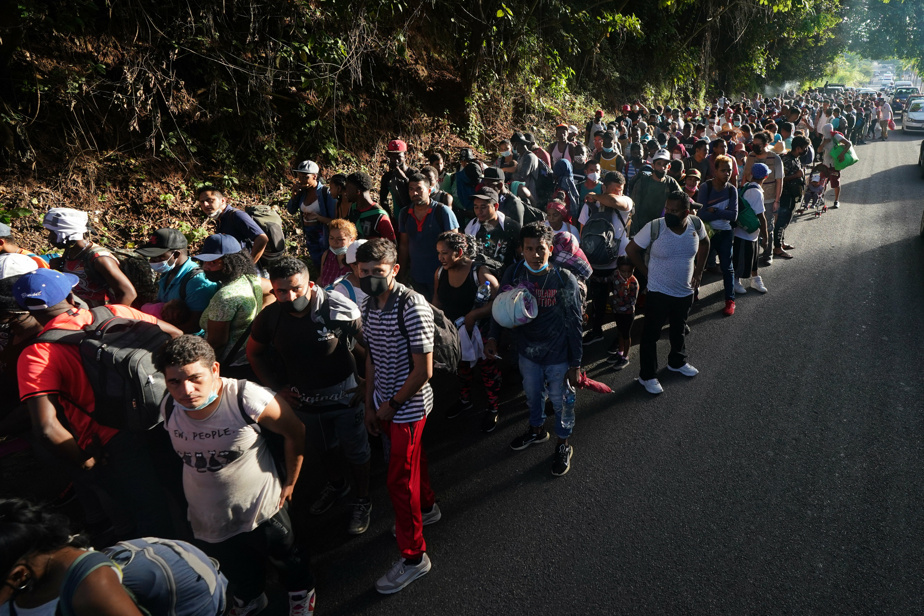 (Tapachula) A new caravan of around 300 migrants, mostly from Central America, left Tapachula for the United States on Saturday, noted an AFP journalist.

Salvadorans, Hondurans, Guatemalans, but also some Haitians and Venezuelans, who in addition to suitcases and water bottles often also carried children in their arms, set out on foot to the Tapachula-Mazatan coast.

“I joined them because I was about to die in my country,” said a young Honduran named Darwin. “I hope to find a job up there,” he added, referring to the US.

This is the fourth caravan of migrants to leave for the United States in a week, despite the presence of members of the National Guard Police and agents of the National Migration Institute (INM) trying to prevent them from reaching their destination.

Activists and members of UN organizations accompany the migrants and denounce the excessive use of force by the Mexican authorities.

The INM had to suspend two of its agents who had beaten a migrant.

Mexican President Andres Manuel Lopez Obrador (AMLO) said Thursday he would write to US President Joe Biden to insist that the root causes of migration from Central America need to be addressed.

This is the fourth caravan of migrants to leave for the United States in a week.

AMLO has repeatedly offered to expand one of its federal welfare programs to Central America to create 1.2 million jobs in the region.

Mr Lopez Obrador also suggested granting a work visa to the US for those who have been on this program for three years.

This week, Mexican authorities arrested dozens of migrants, mostly from Central America, including children, who walked to the United States to flee poverty and violence.

Mexico has seen a surge in migrant arrivals heading north following the arrival at the White House of Joe Biden, who had promised a more humane approach.

US Vice President Kamala Harris also stressed the need to address the root causes of migration during her June visit to Mexico, but warned that it would take time.

Mexico has sent more than 27,500 armed forces to its northern and southern borders to deal with these waves of migration.

Georgia | Demonstration for the release of ex-President Saakashvili