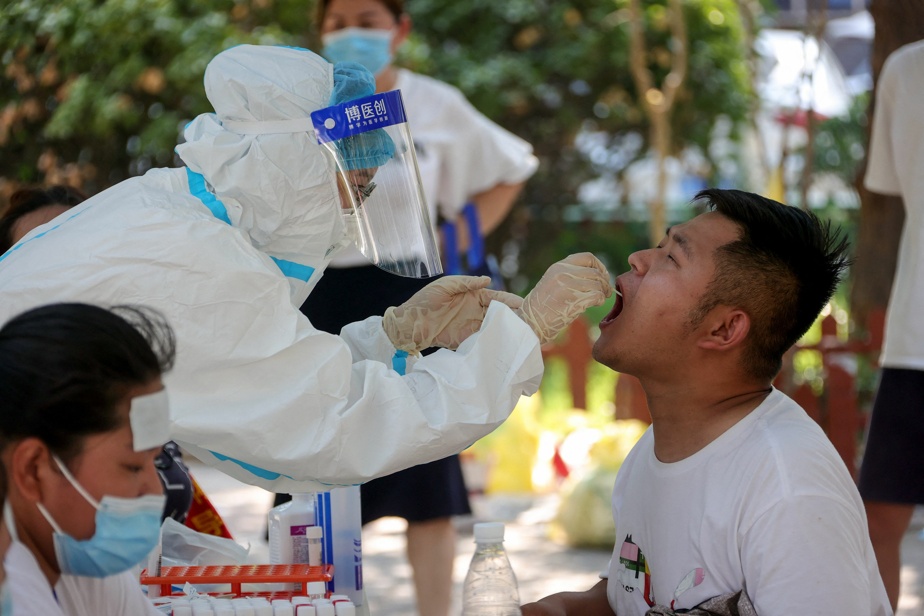 (Beijing) Millions of people were tested for COVID-19 in several major cities in China on Sunday to contain a rise in coronavirus cases unprecedented for months.

The epidemic that hit Nanjing Airport (East) in late July has now spread to more than twenty cities and more than ten provinces.

China is facing the worst wave of contagion in several months, the authorities attribute the increase in cases to the Delta variant.

While the coronavirus was first detected in Wuhan (center) at the end of 2019, China has now largely contained the epidemic.

Authorities organized three massive screenings among the 9.2 million residents of Nanjing and imprisoned hundreds of thousands of people to contain the contamination.

According to the authorities, the current spread of the virus is related to the high contagiousness of the Delta variant and the peak of the tourist season in the country with heavy use of air traffic by the Chinese.

Those who have traveled to Nanjing in the tourist town of Zhangjiajie in Hunan Province are wanted by the authorities.

The 1.5 million inhabitants of this tourist city were locked up on Friday.

According to health officials, the mini-outbreak recorded in Zhangjiajie was caused by travelers from Nanjing and helped spread the disease to more than 20 cities.

“Zhangjiajie is now the new starting point for the epidemic to spread in China,” virologist Zhong Nanshan told reporters on Saturday.

“We have to expand the search for contact cases of the Delta variant.”

Beijing reported three local contamination cases on Sunday: a family living in a suburb of the capital who is returning from Zhangjiajie, said the Beijing health department.

The capital has cut all of its rail, road and air connections to regions where cases of coronavirus have been identified.

Beijing has also closed its doors to tourists, only letting in “important travelers” who have tested negative.

New cases were recorded on Sunday in Hainan Island, another popular tourist destination, as well as in Ningxia (north) and Shandong (east) provinces, the authorities said.

The country is also facing a surge in cases in Zhengzhou city, Henan Province, which recently suffered fatal flooding after two maintenance workers tested positive at a hospital that has hospitalized patients from overseas.

27 local cases have been registered in this city and authorities on Sunday ordered its 10 million residents to be screened.

After learning that some patients had been vaccinated, Chinese health officials said it was “normal” and reiterated the importance of vaccinations and strict measures.

“Because of the Delta variant, the vaccine protection may have decreased somewhat, but the current vaccine still has a good preventive and protective effect against the Delta variant,” says Feng Zijian, virologist at the China Center for Control and Prevention.

The most populous country in the world had administered 1.65 billion doses on Saturday (only “made in China”), but without specifying how many residents were fully vaccinated.

The Greens between hostility and ambitions for the Chancellery | Free press