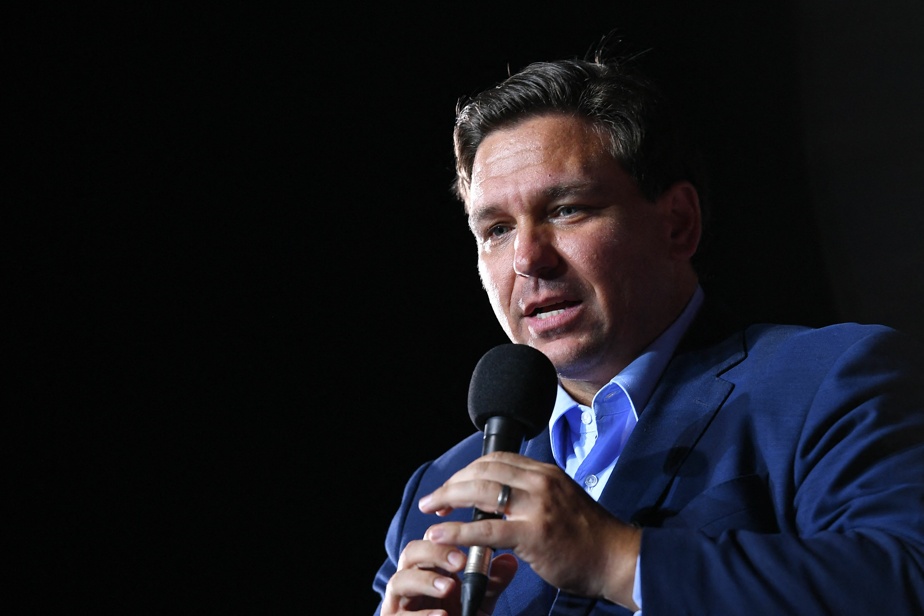 (Miami) Florida Republican Governor Ron DeSantis doesn’t like the press and opponents talking about the pandemic resurgence in his state because it could threaten the ambitions of this rising star in American politics.

Near Donald Trump, Ron DeSantis, 42, is regularly named as one of the potential Republican candidates for the 2024 presidential election.

But he’s now playing a close game in his state and opposed restrictions like wearing masks in schools as COVID-19 cases rise.

In the tradition of the Republican Party, he appears as a defender of individual freedoms in the face of the measures recommended by the American health authorities.

From the start of the pandemic, the Republican-elected refused to make it mandatory to wear a mask in the Sunshine State, leaving that privilege to cities and counties. It also fostered a quick reopening of the economy and removed almost all of the constraints that businesses had to adhere to as of September 2020.

His strategy seemed to be paying off at first. Despite the high number of COVID-19 infections, Florida has not recorded a higher than the national average death rate and the economy has recovered, adding to its national importance.

According to a recent poll by Fabrizio, Lee & Associates, he ranks second behind Donald Trump among the favorites for a Republican nomination in 2024.

However, this promising dynamic could be hampered by the new outbreak of the epidemic. Florida is now the second U.S. state for the number of cases after Louisiana, and has broken its record for COVID-19-related hospitalizations every day since August.

“It is certain that the current wave of COVID-19 could harm his political future,” said J. Edwin Benton, professor of political science at South Florida University.

“DeSantis has lost the advantage it had a few months ago, and that’s largely due to its controversial stance on the coronavirus,” he adds.

However, under fire from critics, the Republican decided to harden his line. Within a few days, he threatened to cut funds on school districts that wanted to impose masks on their students.

Mr DeSantis also unsuccessfully attempted to prevent cruise lines from demanding proof of vaccination from their passengers, accusing the press of “creating hysteria” while blaming President Joe Biden for the situation.

The Republican’s statements are reminiscent of those of Donald Trump during his final months in the White House. It is not a coincidence.

Ron DeSantis, described by political scientist Larry Sabato as “smarter than Trump, a little more cautious and calculated”, comes from the working class. A graduate of Yale and Harvard, he knows the billionaire’s impact on Republican voters better than anyone.

In 2018, the almost unknown MP managed to win the support of President Trump for his candidacy for governor of Florida, in which he defeated his Democratic opponent Andrew Gillum.

“DeSantis looks like a Trump 2.0,” says Sabato. “But he’s still a long way from being as good a speaker” as the former Republican president, he added.

Mr DeSantis’ strategy is risky, especially if the health situation continues to deteriorate.

“Most likely he will never lose the support of those who support Donald Trump,” said Judge J. Edwin Benton. “But I think he’s lost support from independent voters, and perhaps some moderate Republicans too, who believe we should listen to science, not personal dogmas or ideologies.”

The governor’s popularity can be explained precisely because he has succeeded in seducing other types of voters than the Trumpists, according to Republican Carlos Curbelo, who was in the House of Representatives at the same time as Ron DeSantis.

“He stayed loyal to Trump’s electorate while winning independent and moderate voters on issues such as education and the environment,” he said.

“It’s a balancing act all Republicans have to do these days, and DeSantis has done better than the rest so far,” continued Curbelo.

Ron DeSantis is “ambitious, disciplined and extremely focused on his goals,” said the former MP, who doubts the pandemic will harm him.

“It is certain that he is wrong about his policies and that it will cost lives. But will voters see that? There are few chances. We live in the post-truth era, which was in large part created by Donald Trump, ”he says.

September 11th and the transformation of the United States