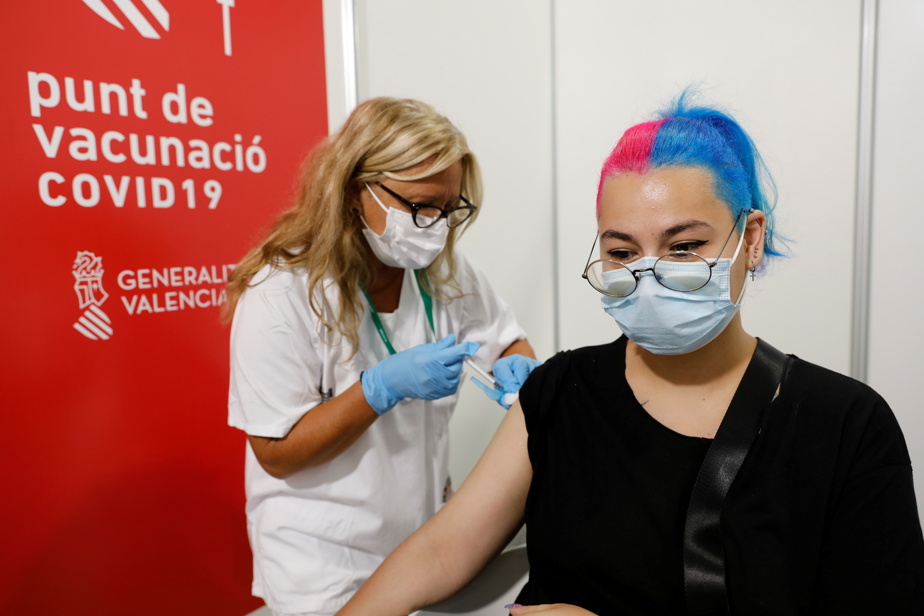 (Madrid) Among the main EU countries, Spain leads the way in COVID-19 vaccination, thanks to the unwavering trust of the population in its health system and vaccines, but also to a strong family of solidarity.

Spain has already fully vaccinated around 61% of its population, according to AFP from official sources, compared to almost 58% in Italy, 56% in France and 55% in Germany. Outside the EU, it also does better than the UK (58.5%) and the US (just over 50%).

In addition, more than 70% of Spaniards have already received at least one dose, for vaccines that require two.

These figures make the debates about measures such as compulsory vaccinations or the health pass, which have provoked demonstrations in some European countries, superfluous.

One of the “key elements” for the success of the vaccination campaign in Spain is “trust in the health system,” Josep Lobera, professor of sociology at the Autonomous University of Madrid, told AFP.

As a member of the National Committee on Vaccination Strategy, he was hired by the authorities to investigate how the Spaniards would accept the vaccine.

Mr Obera and his colleagues stated that they “had an advantage over other countries because trust in vaccines in general, and in children’s vaccines in particular, has traditionally been higher than in other European countries”.

According to a study conducted in 15 countries by Imperial College London and published in June, 79% of Spaniards believed in coronavirus vaccines, compared with just 62% of Americans, 56% of French, or 47% of Japanese.

“Take care” of your family

In Madrid, the Wizink sports complex has been converted into a 24-hour vaccination center. On an August morning, the blazing sun, common at this time of year, did not stop a long line of young people patiently waiting for their second dose.

“I have 100%, 200% trust” in the health system, says Inés Gómez Calvo, 28-year-old graphic designer. For Alejandro Costales, a 30-year-old lawyer, vaccination means “taking care of your family”, “guaranteed to go home, come back and not infect them”.

In Spain there is no need to resort to mandatory vaccination. “We didn’t have to take this measure because practically all teachers and practically all citizens are voluntarily vaccinated,” said Education Minister Pilar Alegría on Monday on Radio Cadena Ser.

Professor Lobera explains this attitude with the fact that the Spanish associate the public health system with modernity, in a country that thirsted for modernity after the death of the dictator Francisco Franco in 1975.

Family ties also play an important role in a country where, according to the National Statistics Institute, more than half (55%) of 25 to 29-year-olds were still living with their parents in 2020.

The sociologist considers it a cultural, but also an economic one, because “Young people have much more difficult independence, the incapacity for work is more precarious and the family thus played the role of the ‘lifeline’ of crises.

The trauma of polio

The oldest Spaniards also remember the devastation caused by the delay in polio vaccination to thousands of children born between 1955 and 1965.

While vaccination began in many countries in the mid-1950s, it took almost ten years in Spain. A neglect that was masked by the censorship at the time, which recently led the government to recognize the people who suffered as victims of the Franco regime.

“That was an absolutely catastrophic situation,” recalls Javier García, president of the Cota Cero association and himself suffering from polio.

Javier García, now 60 years old and in a wheelchair, could only stand at the age of four and underwent 17 leg operations as a child.

When asked about the coronavirus vaccine, he said, “It’s important that everyone receives it, and the sooner the better.”

Afghanistan | The Taliban are trying to reassure their opponents

Tunisia | An “open door” vaccination day to contain the crisis

The “shaman” QAnon of the Capitol attack pleads guilty