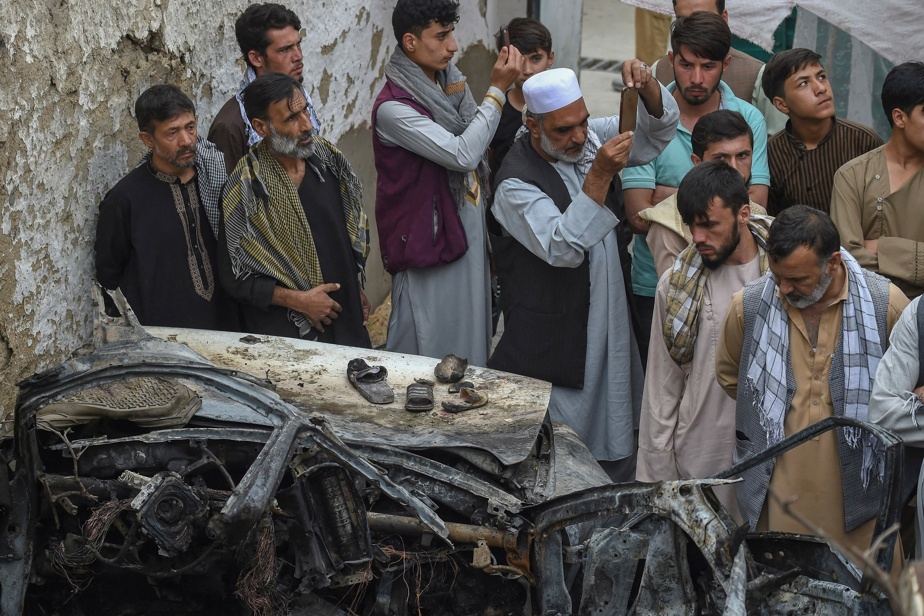 (Kabul) When Ezmarai Ahmadi returned to Kabul on Sunday, he gave his son the keys to his limousine and watched as the other children in the house happily stormed into the car. Then an American missile fell in, his brother said, killing 10 people.

“The missile arrived and hit the car full of children that was parked on the premises of our house,” recalls Aimal Ahmadi, Ezmarai’s brother, on Monday from Kwaja Burga, a densely populated area in northwest Kabul. “He killed them all. ”

Aimal Ahmadi said ten family members were killed in the air strike, including his own daughter and five other children.

When AFP visited the site of the strike on Monday, the grieving father was eagerly awaiting the arrival of relatives to help him with the funeral of most of his family.

“My brother and his four children were killed. I’ve lost my little girl, nephews and nieces, ”he notes sadly in front of the vehicle’s skeleton, which has been turned into a pile of charred metal.

“We are aware that civilian casualties became known after our attack on a vehicle in Kabul today,” said Captain Bill Urban, spokesman for the US Army’s Central Command (Centcom), in a press release on Sunday.

The United States said the same day that it had destroyed a vehicle loaded with explosives in an air strike, thwarting an attempt by the Islamic State jihadist group to detonate a car bomb at Kabul airport.

This attack could be the latest mistake in Afghanistan by the American army, whose last soldiers left Kabul on Monday night after 20 years of war against the Taliban, killing dozens, if not hundreds, of civilians from “collateral damage”.

Empty words for Aimal, who can hardly believe that his brother could be mistaken for a sympathizer of the Islamic State, let alone a suicide bomber who is planning a deadly car bomb.

Ezmarai was an engineer who worked for an NGO, an ordinary Afghan who tried to make ends meet at a time of great instability, he explained.

But Americans’ nerves have been strained since an ISIS suicide bomber unleashed a massive explosion at the airport entrance on Thursday, killing around 100 Afghans and 13 US soldiers as huge crowds tried to pull in to leave Afghanistan.

“We know that there were large and powerful explosions as a result of the destruction of the vehicle, which indicated the presence of a large amount of explosive material inside, which may have caused additional losses,” he said. “It’s not clear what happened and we’re still investigating.”

“Parts of the body”

According to the United Nations Relief Mission in the country (Manua), around 38,000 civilians were killed and more than 70,000 injured in the period 2009-2020 alone during this endless conflict.

When the neighbors heard the neighborhood explosion, they came quickly to see what they could help.

“All the children were killed in the car, the adults were killed outside. The car was on fire – we could hardly find any body parts, ”said one of them named Sabir.

While the United States has hinted “that (they) would feel deeply saddened by the possible loss of innocent people,” neighbor Rashid Noori shouted desperately.

The 20th anniversary of September 11th | An unlikely repeat

Afghanistan | Third day of the fighting for the city of Herat