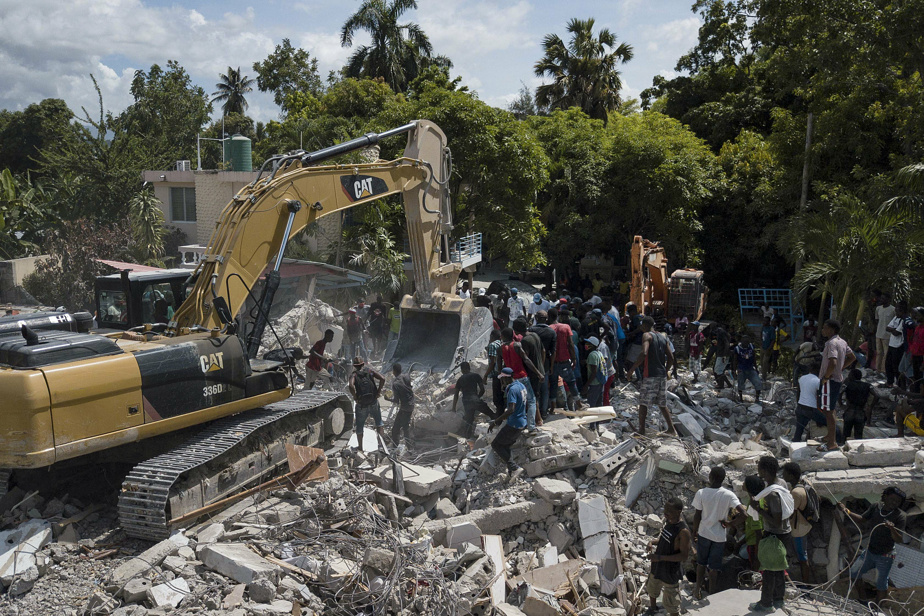 (Port-Salut) Gutted building, stuck in the rubble. Two days after the strong earthquake that struck Haiti, relief efforts to find people missing or stranded under the ruins were activated on Monday as a storm approached that threatened to worsen the situation.

According to the Haitian Civil Protection, 1,297 people were killed and more than 5,700 were injured in the earthquake, which hit the southwest of the country on Saturday at 8:29 a.m. local time. Almost 30,000 homes were destroyed or damaged.

The municipal hospital has decided: We have to try to protect the patients who have piled up under plastic sheeting in the courtyard since the earthquake. During the lunch break on Monday, the patients were moved within the facility despite fear of aftershocks.

“The doctors are asking us to go under the concrete slab tonight, but we’re not sure yet. It’s still shaking, that’s why we’re installed outside, ”said Wilfried Labaye, 41, before the decision was made to put everyone inside.

His wife, Espérance Rose Nadine, 36, is lying next to him on the floor. When her house collapsed in the nearby mountains, both legs were crushed.

Not only is Mr. Labaye worried about his wife’s health, but also about the bad weather that they cannot escape.

“I don’t know how this storm will pass,” he said.

In addition to the nurses caring for the wounded, Aline Cadet, a 26-year-old midwife, is being undermined by the announcement of weather reports.

“Psychologically, we are not doing well. We don’t even know how to do it, ”she blurted out. “There are pregnant women here; some have lost their babies to falls or injuries,” she says.

Many countries, including the United States, the Dominican Republic, Mexico, and Ecuador, have offered to help deploy personnel, emergency rations, and medical equipment.

The American army announced on Monday the establishment of a joint military mission, with the deployment of a team to assess the situation in the affected areas thanks to aerial observation equipment. Four helicopters were also mobilized for the transport.

US Coast Guard personnel evacuate an injured man by helicopter from Les Cayes on August 16.

It is about “having an idea of ​​the damage,” said Pentagon spokesman John Kirby on Monday. Aerial photographs taken by US teams “will help determine what help is needed where and when”.

Trucks and excavators were used in the affected areas, for example in the city of Cayes, near the epicenter of the earthquake, around 160 km from the Haitian capital Port-au-Prince.

A nurse tends to a woman injured in the earthquake outside the hospital in Les Cayes on August 16.

Haitian Prime Minister Ariel Henry, who had declared a state of emergency for a month in the four departments affected by the disaster, thanked the international community on Sunday.

“We want to react more appropriately than in 2010 after the earthquake. All external aid must be coordinated by the Directorate for Civil Protection ”, demanded the head of government and called on his fellow citizens to“ national unity ”.

“Let us forget our arguments,” said Mr Henry, who heads America’s poorest country, amid a crisis since the assassination of President Jovenel Moïse on July 7th.

The magnitude 7 earthquake on January 12, 2010 devastated the capital and several provincial cities.

More than 200,000 people were killed and over 300,000 others injured in the disaster, while more than 1.5 million Haitians were left homeless.

COVID-19 in Australia | More than a thousand contaminations in 24 hours, a first

Scholz: We were guinea pigs – and it went well |

The brothers and sisters of Wahl-O-Mats