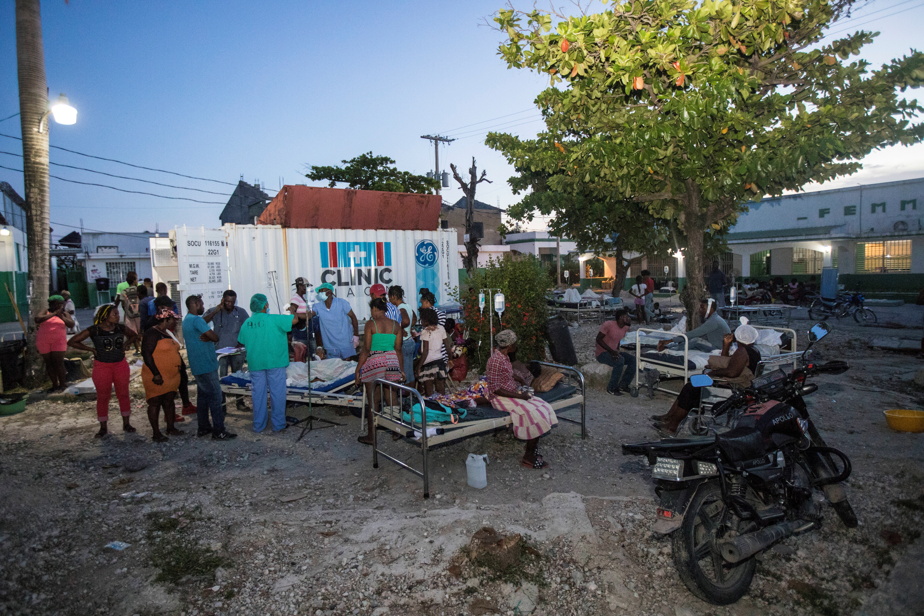 (Les Cayes) On benches, curled up in chairs or lying on sheets on the floor, the wounded in the earthquake that devastated southwest Haiti on Saturday crowd into the emergency room of the Cayes hospital, which was reinforced on Sunday.

“At the time of the earthquake, there were only three doctors in the department,” says Dr. Michelet Paurus. “This morning it will be better because we have received orthopedists, surgeons and also 42 assistant doctors who are spread across all the hospitals in the department,” explains the emergency doctor.

Rudolphe Steven Jacques, a 26-year-old doctor, is one of the health professionals who came from the capital, Port-au-Prince.

“The material shortage is chronic, depending on the person moving. You see, this woman has been waiting for me to sew her up for a while, but I don’t have a tray for that at the moment, ”the young practitioner regrets, pointing to a large wound on the leg of a patient who is sitting in a corner.

In the small rooms of this hospital, patients and doctors jostle.

“This morning there are still many wounded arriving, I did not expect that: They are those who come from more distant areas. As you can see, the emergency room is very busy, but we are doing our best to treat people, ”says Dr. Jacques.

Haitians are still searching for survivors after the 7.2 magnitude earthquake on Saturday morning.

In the aftermath of the violent 7.2 magnitude earthquake, hospitals in the country’s third largest city were saturated with the massive influx of wounded.

“I was home when the earthquake happened. A vibration sent me flying through the air and landed on my arm. Neighbors came to help me get a taxi. I went to several hospitals: but they were overburdened, ”recalls Venel Senate, rather corpulent in his forties.

“I came here this morning and was finally taken care of. I radioed for free and they put this cast on me too, free of charge, ”he said, relieved, and showed his right arm in a sling.

Living in Les Cayes, his house completely destroyed, the Senate of Venel is waiting in the courtyard of the hospital for one of the drugs prescribed for him to be available in the pharmacy of the facility, which remains in the city center. .

Already treated, but under observation, many injured people settle down on the lawns around the buildings. They are still afraid to return to the buildings, traumatized by the very frequent aftershocks.

“People are scared to go home, but it’s going to rain tonight,” explains Dr. Paurus, while quickly switching between the different departments.

“We’ll try to get them into this room because the roof is made of sheet metal. We will try to put up tents in the yard for the children in the children’s ward, ”he adds.

The people of Les Cayes now fear the torrential rains and violent winds that Tropical Storm Grace could bring in the coming hours.

“When it rains as much as we predict, we really don’t know what we’re going to do. It’s in quick succession, we can’t, ”alerted Dr. Michelet Paurus.