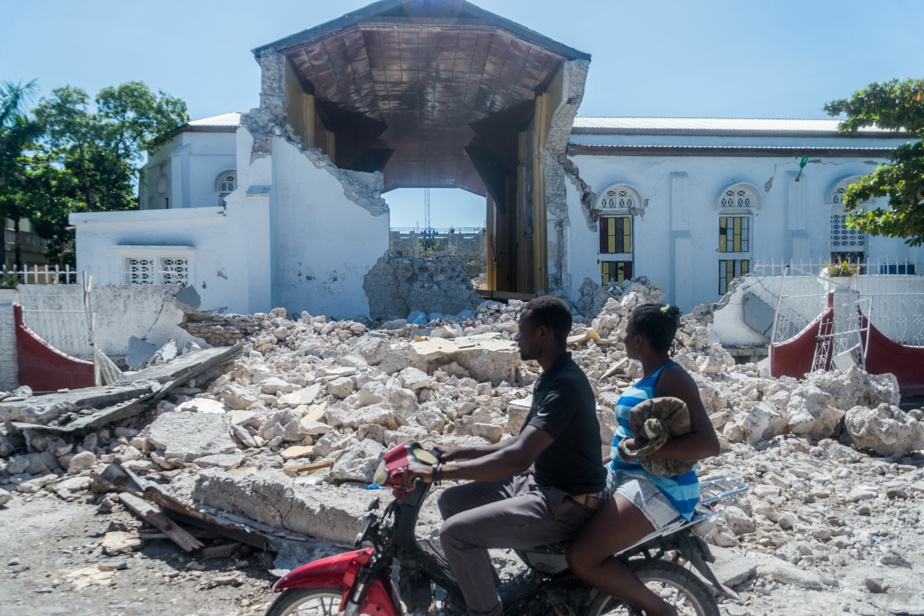 (Les Cayes) The severe earthquake that hit Haiti badly on Saturday left nearly 1,300 dead and 5,700 injured and left thousands of people in the south-west of the country homeless, missing in search of loved ones, or stranded under the rubble.

During the aftershocks of the 7.2 magnitude earthquake, residents and helpers were busy on Sunday trying to find survivors with limited resources.

A number of heavy machinery, trucks and backhoe loaders were busy moving concrete slabs from collapsed buildings in the town of Les Cayes near the epicenter of the earthquake, about 160 km from the Haitian capital Port-au-Prince, AFP said Place fixed.

The earthquake struck southwest Haiti at 8:29 a.m. (12:29 p.m. GMT) on Saturday. The balance of the Haitian civil defense was exactly 1,297 dead on Sunday evening. Almost 30,000 homes were destroyed or damaged.

The walls of a residence in Les Cayes have collapsed.

Only ruins remain of the two-story building by Marcel François in Les Cayes.

“It’s a grace from God and thanks to my phone that I’m alive because I could tell the people outside where I was,” the 30-year-old man told AFP.

His little brother Job, supported by neighbors, spent more than three hours pulling him out of the rubble with nothing but the strength of her arms.

“I was on the bus to go to work when the earthquake hit. I managed to reach Marcel on the phone, but he told me “come and save me, I’m under the concrete” ”, testifies Job François.

With an injured head, once pulled out of the concrete blocks and broken furniture, Marcel François was immediately taken to the hospital, in a state of shock because there was no news from his 10-month-old daughter, who is still trapped in the ruins.

“I thought my child was dead. I cried when I got to the hospital, I was resigned,” confides the man in his mid-thirties, moved.

Thanks to the joint action of the residents and her uncle, little Ruth Marlee Alliyah François was taken out of the house four hours after the earthquake.

However, relief efforts to help the victims could be hampered as the Tropical Depression approaches Grace, with the risk of torrential rains and rapid flooding, according to the US National Weather Service. It is expected Monday to Tuesday overnight and the country has been placed on increased vigilance.

Personnel and medication have already been dispatched to the southwestern peninsula by the Ministry of Health, but emergency logistics are also endangered by the months of uncertainty in Haiti.

For a little more than two kilometers, the only road that connects the capital with the southern half of the country crosses the poor district of Martissant, which has been controlled by armed gangs since the beginning of June, and prevents freedom of movement.

The few hospitals in the affected regions are struggling to provide emergency care.

Installed on benches, rolled up on chairs or lying on sheets on the floor, injured people were waiting on Sunday to be treated at the hospital in the coastal town of Cayes, AFP said.

Many countries, including the United States, Dominican Republic, Mexico, and Ecuador, have already offered their assistance with deploying personnel, emergency rations, and medical equipment.

Prime Minister Ariel Henry, who had declared a state of emergency for a month in the four departments affected by the disaster, thanked the international community on Sunday.

The Hotel Petit Pas in Les Cayes was destroyed during the earthquake.

“We want to react more appropriately than in 2010 after the earthquake. All external aid must be coordinated by the Directorate for Civil Protection ”, demanded the head of government and called on his fellow citizens to“ national unity ”.

“Let us forget our arguments,” said Mr Henry, who heads America’s poorest country, amid a crisis since the assassination of President Jovenel Moïse on July 7th.

Memories of the 2010 earthquake

We still remember the earthquake on January 12, 2010, which devastated the capital and several provincial cities.

More than 200,000 people were killed and more than 300,000 others injured in the disaster, while more than 1.5 million Haitians were left homeless. The country’s efforts to recover from this disaster have been hampered by severe political instability.

Eleven years later, the island is still in an acute socio-political crisis, the president of which, Jovenel Moïse, was assassinated last month.

Police arrest Mafia leaders in Naples before leaving for Spain