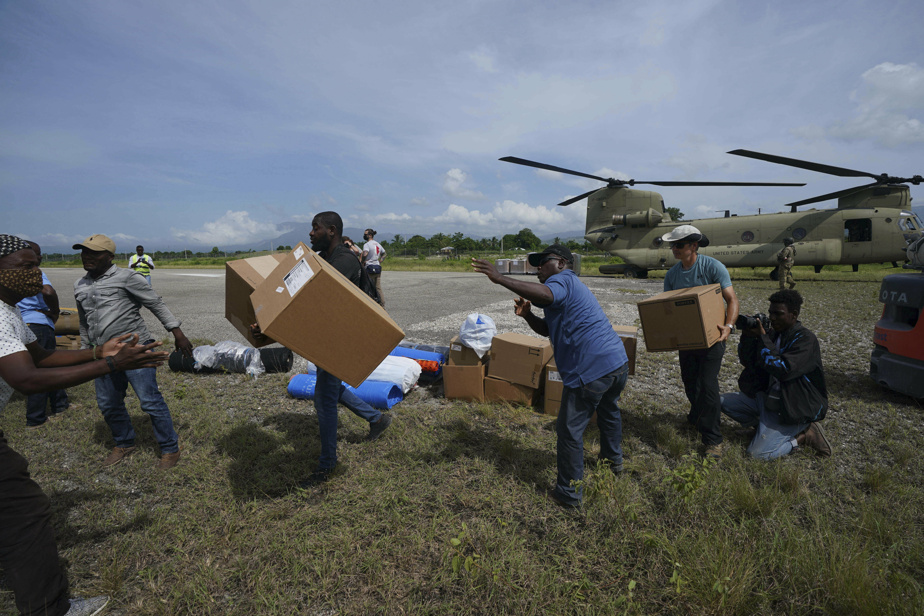 (Port-au-Prince) Five days after the earthquake that devastated southwest Haiti and left almost 2,200 dead, the Haitian authorities and their international partners want to coordinate humanitarian aid to stop the disorganization in the capital following the terrible earthquake in January 2010 .

In the August 14 disaster, nearly 53,000 homes were completely destroyed and more than 77,000 others were damaged. The priority of the authorities and humanitarian actors is to avoid the concentration of people in large informal camps.

“In order not to repeat the mistakes of 2010, no tents are distributed and no camps are set up. We will develop strategies that allow people to repair and rebuild their homes, ”said Federica Cecchet, coordinator for the International Organization for Migration (IOM) in Haiti.

In addition to food, drinking water and emergency medical aid, plastic sheets, but also boards and nails have already been sent via the first road convoys from Port-au-Prince to the affected regions, the Haitian civil protection agency announced on Thursday.

“We must not fall back into the 2010 pitfalls to have inventories everywhere that we cannot manage or reduce,” said Jerry Chandler, director of civil protection, adding that he wants to “manage within the prescribed standards”: the affected People must be in dignity ”.

In the face of the tragedy, the international community was quick to show its support by offering both technical and financial assistance.

The United States has chartered eight army helicopters from Honduras to continue medical evacuation efforts of the most seriously injured to specialized hospitals in the Haitian capital.

A field hospital is also being set up by the American Army in the city of Les Cayes, the capital of the South, the department where the number of earthquakes is greatest, both human and material.

“We have Air Force medics over there to help,” General Hank Taylor told the Pentagon on Thursday.

In addition to food, drinking water and emergency medical aid, plastic sheeting, boards and nails have already been sent.

“The hospital structure is deployed through the rotations of our helicopters, and more are being deployed today to provide hospital assistance and first aid,” he added.

The USS Arlington, a U.S. Navy transport ship, and a British Navy boat are being deployed to Haiti to facilitate U.S. helicopter operations.

For its part, the European Union has mobilized 3 million euros in aid, to which are added material contributions from the member states, in particular a water purification module provided by France and a sewage treatment plant provided by Spain.

For better resource management, the IOM has set up an internet platform that lists non-food donations that will be used for the construction of housing: only humanitarian workers duly registered with the Haitian government can provide details of their equipment Disaster Distribution Operations.

A field hospital is also being set up by the American Army in the city of Les Cayes, the capital of the South, the department where the number of earthquakes is greatest, both human and material.

“This allows for a more equitable distribution of aid to [les endroits] where there has already been help so as not to always return to the same areas and to avoid duplication, ”explains Federica Cecchet.

“Now we know very well that there are NGOs that disembark, some even arrive in certain areas of the country in private helicopters, without the government knowing about it,” she complains.

After the earthquake that killed more than 200,000 people in the capital Port-au-Prince and the surrounding area in January 2010, the uncontrolled interventions of foreign groups in the country had strengthened Haiti’s nickname “Republic of NGOs”.

The disaster victims living in more remote areas were completely ignored by humanitarian actors who acted without accountability to national authorities and then unable to respond to the emergency as the earthquake killed many senior officials and destroyed almost all ministries and administrative buildings .