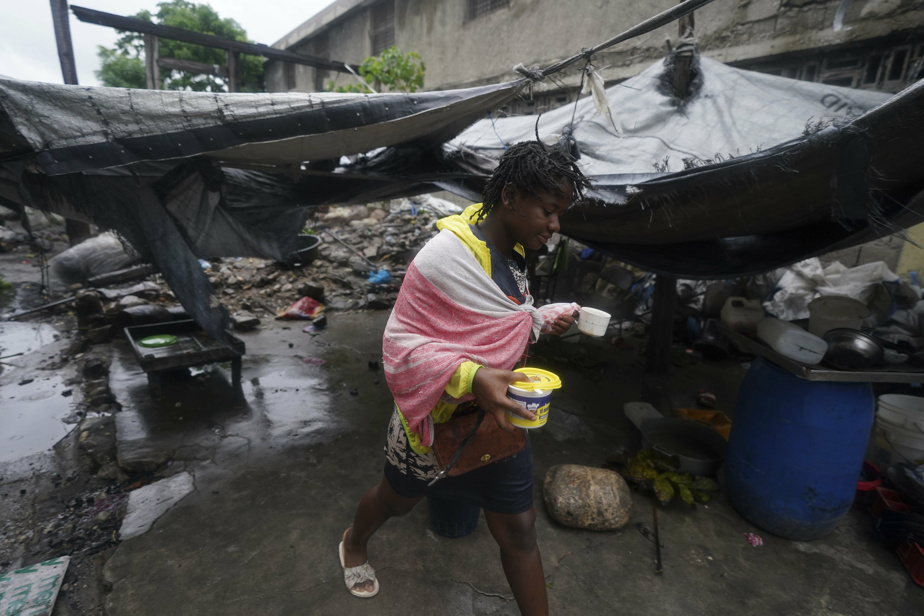 (Les Cayes) Soaked, exhausted residents who have no choice but to urinate and defecate in the flood-threatened streets: southwest Haiti is falling into chaos hour after hour, the victims of the recent earthquake on Tuesday are helpless in the face of severe weather from a new tropical storm.

In the city of Les Cayes, more than 200 people are starting to build precarious shelters on a flooded soccer field in the persistent wind and rain. Everyone was hit by the 7.2 magnitude earthquake on Saturday that turned tens of thousands of homes to dust in seconds. At least 1941 people were killed, according to a “very partial” report announced by Haitian civil protection on Tuesday.

With just a shower cap to protect against drips, Magalie Cadet is exhausted from the three days of hardship she has just endured.

“We don’t have space for our needs either, so we have to look on the street to relieve ourselves,” complains the 41-year-old woman, who has worn out her nerves from the incessant aftershocks of the earthquake.

In the city of Les Cayes, more than 200 people are starting to build precarious shelters on a flooded soccer field in the persistent wind and rain.

“Last night I took refuge near the church, but when we felt the earth shake again, I ran back here,” she sighs.

About 9,900 people were injured by the quake and its aftershocks. Rescuers have rescued 34 people from the rubble in the last 48 hours, the authorities said.

In addition to the torture of the victims sleeping outside, the showers of tropical storm Grace will come on Tuesday. The rainfall can lead to “major floods” in places, according to the American Hurricane Center, based in Miami.

Under these conditions, the Haitian authorities called for “extreme vigilance” regarding the cracked houses that could collapse under the weight of the rain.

The United States, which evacuated around 40 people for urgent treatment, chartered eight helicopters to use aerial photographs to gauge the extent of the disaster.

They are hastily tinkering with temporary accommodation, annoy the residents.

“We had a bad time last night. Lots of wind and then rain. I stayed where I was: every time the gusts sent us water, ”says Natacha Lormira, holding the thin piece of wood with a torn tarpaulin in one hand.

“I don’t want to go under a gallery or a corner of a wall because we’ve all seen people die under parts of the wall. So we resign: Better wet than dead, ”she complains.

“The state does not regulate anything”

Soaked from the persistent rain, Vladimir Gilles tries to plant a few pieces of bamboo deep enough in the lawn to protect his wife and child.

“My house is destroyed, I have nowhere to sleep. We need a plastic tarpaulin just to take a dry nap, but the state doesn’t regulate anything, ”plagues the 28-year-old young man.

Prime Minister Ariel Henry has declared a state of emergency for one month in the four departments affected by the disaster.

But a month after the assassination of its President Jovenel Moïse, the poorest country on the American continent is facing political chaos that further complicates its governance.

UNICEF estimated Tuesday that 1.2 million people, including 540,000 children, were affected by the crisis.

Access to water also remains very limited in places, for example in the city of Pestel, where more than 1,800 cisterns are cracked or crushed, which leads to fears that the sanitary conditions will deteriorate. A few months after the terrible earthquake in 2010 that killed 200,000 people, poor wastewater management at a UN base had encouraged the spread of cholera in the country.

Your visually impaired son, a couple invents glasses to help him