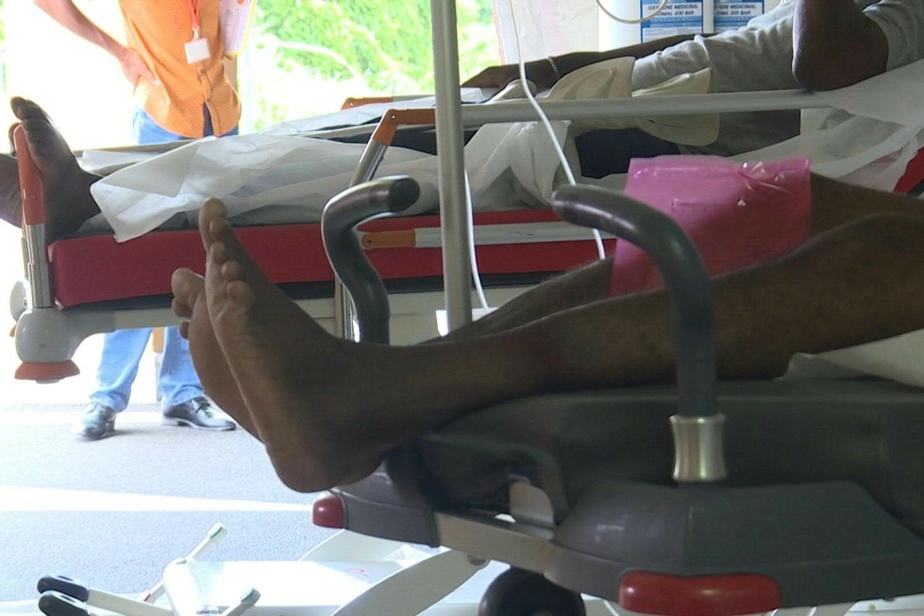 (Fort-de-France) “It’s like emptying the ocean with a teaspoon”: Jean-François Bouet, ambulance doctor in Saint-Malo and Dinan, who came to Martinique to reinforce the fight against COVID 19 epidemic says he discovered “the horror” upon arrival.

Jean-François Bouet came to the West Indies for 15 days as part of the call for national solidarity and landed in Fort-de-France with about sixty other carers on Tuesday evening a week ago.

“I started on Wednesday morning. The horror. I discovered the disaster. I found a completely saturated emergency room with 60 patients on stretchers, ”he describes.

And “a team (of supervisors, editor’s note) great, but exhausted”. “We have the feeling that the hospital structure has shaken,” he emphasizes.

The 53-year-old volunteer found it “normal” to “lend a hand”. We are not there as teachers to judge or revolutionize the system, we are there to help ”.

Assigned to the advanced medical post, which consists of three tents set up outside the emergency room to weed out COVID-19 patients, “suspected COVID-19” and non-COVID-19, he says he “has not experienced a situation “. so “in Saint-Malo.

“60 patients in the emergency room, there is a moment when you feel completely overwhelmed, underwater, and that’s it every day for two or three days, it’s awful to live with” […]. It’s like emptying the ocean with a teaspoon, that doesn’t work, ”he remembers.

“We bring oxygen, but we can’t do more, there are no beds, the sheaves are taken,” explains the emergency doctor.

He stops abruptly: A new patient has just arrived, lying on his stomach on a fire brigade stretcher.

“This is a serious case, if it gets to the stomach it’s not good,” he said.

With the Samu paramedics, he immediately got involved with the sturdy man. “Hello sir, when did the signs (of the disease) start?” He asks the patient, who is conscious but weak and is quickly put on oxygen.

The emergency doctor called very quickly to request a place inside and to offer the patient a higher oxygen flow.

“With such a patient, the most important thing is the speed of the treatment,” he explains.

The flow of ambulances and fire engines bringing in patients is unbroken, but less significant than in recent days. “It has calmed down. We still have serious COVID-19 on the way, the epidemic is not over yet, but there are fewer at the moment, ”hopes Mr Bouet.

“For three days we have noticed a stagnation in entries from patients with suspected COVID-19,” confirms the head of the emergency room, Yannick Brouste.

He also notes “the decline in telephone calls at the regulatory level of Center 15, which makes us think we may be on a plateau. It is certainly high, but we have the impression that we are stabilizing the entries a little ”.

On Monday, Martinique saw the incidence rate drop to 928 cases per 100,000 population, but still 13 additional deaths in 24 hours.

According to Mr Brouste, it is “the inclusion effect”, phase 2 of which, very severe, has lasted for two weeks. “We hope that the associated decline will continue.”

In the emergency room, the corridors that were overcrowded with stretchers and patients when the Minister of Health Olivier Veran visited on August 12th, were cleared, only three or four patients are accommodated there.

“But the hospital remains full, 95% of the intensive care beds are occupied, plus 97% of the beds on the floors,” warns the department head, who, thanks to reinforcements, can still “ensure the continuity of care”.

And the staff is “morally and physically tired,” the head of operations specifies. “It was very difficult to see what we saw, it was quite difficult”.

Reservists, national solidarity, firefighters, hundreds of reinforcements have come from France in the last few weeks. But the president of the local authority, Serge Letchimy, asked for others in a letter to the prime minister.