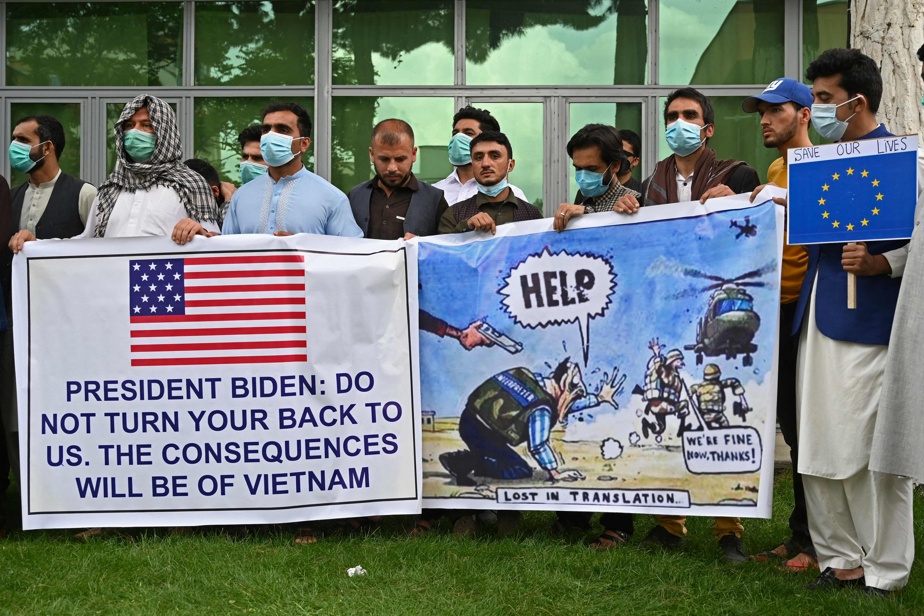 (Washington) The dispatch of thousands of American troops to Afghanistan to evacuate civilians from Kabul, the capital threatened by the lightning victories of the Taliban, resurrected the painful memory of the Saigon fall in the United States on Thursday.

The photo, which in the United States immortalizes the American defeat in Vietnam and shows refugees boarding a helicopter on the roof of a building, blossomed on social networks following the announcement by the Pentagon that up to 8,000 soldiers were being remobilized for the evacuation of civilians from the Afghan capital.

Because of “the acceleration of the Taliban’s military offensives” and “the increase in violence and instability,” Washington decided to “further reduce its diplomatic presence in Kabul,” said US State Department spokesman Ned Price.

To carry out this evacuation of American diplomats, the Pentagon will station 3,000 soldiers at the Afghan capital’s international airport, said its spokesman, John Kirby. Thousands more are being sent to Qatar for technical and logistical support, while 3,500 to 4,000 are being prepositioned in Kuwait to deal with a possible deterioration in the situation.

“Afghanistan is heading for a huge, predictable and avoidable catastrophe. And the government’s surreal attempts to defend President Biden’s dangerous policies are downright humiliating, ”the Senate veteran thundered in a statement.

“President Biden’s decisions lead us to an even worse sequel than the humiliating 1975 Saigon case,” he added.

But since the announcement of a complete withdrawal of foreign forces from Afghanistan in mid-April to September 11, Mr Biden’s government has done everything possible to avoid parallels with Vietnam.

Recently the American president claimed that there was “zero” comparison between the withdrawal of Afghanistan and the pathetic end of the war in Vietnam. “There will be no one who can be evacuated from the roof of an American embassy in Afghanistan. It’s not at all comparable, ”he said.

A US Marine protects a helicopter landing on Okinawa Island in Japan during the April 1975 fall of Saigon.

“I may be wrong, we cannot predict the future, but I do not see Saigon in Afghanistan in 1975,” added the American chief of staff, General Mark Milley, two days later. “The Taliban are not the North Vietnamese army,” he added contemptuously.

Pentagon spokesman John Kirby, who was confronted Thursday with questions about the new US military mission in Kabul, refused to describe it as a “non-combat evacuation operation” known in US military jargon as the NOE. He also pointed out that this operation had no name and avoided talking about evacuations.

The most famous “NOE” mission is Operation Frequent Wind, during which more than 7,000 Vietnamese civilians were evacuated from Saigon by helicopter on April 29 and 30, 1975.

When asked about the image that the departure of American diplomats under military protection and the inevitable comparison with the fall of Saigon would give, Kirby tried in 1975 to underline the differences with Vietnam.

We are not abandoning the Afghan armed forces. We are not completely eliminating our diplomatic presence on the ground

“Nobody is leaving Afghanistan,” he added. “The point is not to let them down, but to do the right thing when it is necessary to protect our own.”

The Taliban, which took control of 12 of Afghanistan’s 34 provincial capitals within a week, announced on Thursday that they had captured Kandahar, the country’s second largest city.