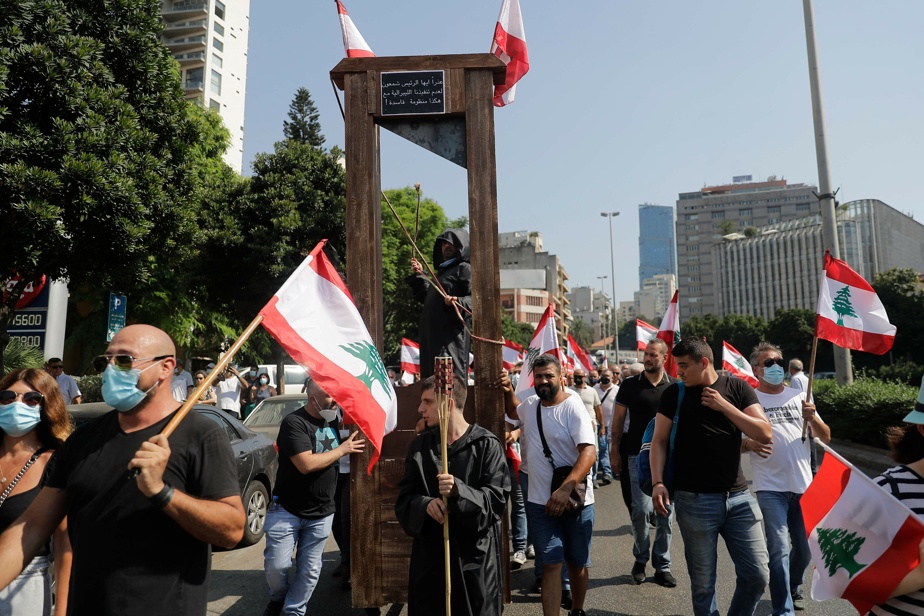 In the Lebanese capital, as in Montreal, rallies on Wednesday showed that at least 214 people were killed in the explosion in the port of Beirut a year ago. The Lebanese also called for justice and denounced corruption.

Last year she was at her home in the Achrafieh neighborhood of Beirut when the explosion sounded, she said. She returned to Montreal the following month and reunited with most of her family, who had been based in Quebec since the early 1990s.

On Wednesday, she attended a rally with around thirty people in the port of Montreal to celebrate the first anniversary of the Beirut explosion that occurred after a fire in a hangar in the port where 2,750 tons of ammonium nitrate were stored in the Lebanese capital . More than 6,500 people were injured and thousands had to be relocated. In the evening, the diaspora was invited to a memorial service in front of the Lebanese consulate in Outremont to commemorate the victims and to demand justice.

“I saw the war and it took years before I stopped jumping at the slightest noise. There I feel fear, fear and incredible anger, ”said Ms. Karim, who wore a face covering that was covered with a cedar tree, the symbol of Lebanon.

Like her, thousands of people in Lebanon have expressed anger over this event, which is attributed to the negligence of the political class. The ammonium nitrate would have been stored in the port for several years without precautionary measures.

In Beirut, families of victims and activists organized marches, candlelight vigils and religious ceremonies. A memorial service was also organized at the Karantina district fire station, which lost several members of the team that died on Jan.

Dozens were also injured in clashes between police and protesters near the Lebanese parliament on Wednesday.

In addition to the mourning for the victims, it is the corruption that many participants in rallies and demonstrations wanted to denounce while Lebanon is going through a severe economic crisis. More than half of the Lebanese now live below the poverty line and the shortage affects essential goods.

Hassan Diab’s government resigned after the explosion, but no one has yet succeeded in building a cabinet. A new prime minister, Najib Mikati, was appointed on July 26, but the situation remains unchanged.

Politicians are accused of blocking the implementation of reforms with financial support and of stopping the investigation by not agreeing to the formation of the new government.

“The greatest anger for me is this anger, this hatred that I harbor against these corrupt leaders who have destroyed the country and brought it to its knees,” said activist Caroline Codsi to La Presse, president and founder of La Gouvernance au Feminine . a non-profit organization promoting women in business.

Caroline Codsi, President and Founder of Women in Governance

She spoke at the rally in the Port of Montreal late Wednesday morning, as did Denis Coderre, candidate for Montreal mayor who briefly attended the event, and Councilor Aref Salem.

The French President Emmanuel Macron announced emergency aid from his country amounting to “almost 100 million euros” over the next 12 months to meet the immediate needs of the Lebanese.

In addition to financial aid, the Lebanese hope for further political measures from the international community. French President Emmanuel Macron accused the Lebanese leaders of “rotting” on Wednesday and threatened them with sanctions. France has already restricted certain Lebanese officials from entering its territory.

The musician Randa Ghossoub had made a butterfly as a funeral wreath.

Musician Randa Ghossoub, organizer of the memorial ceremony at the Port of Montreal, was concerned that the explosion would still go unpunished a year after the events. “I wanted to remember the victims and ask for justice, the truth, we have to know it in order to grieve,” she said.

As a funeral wreath she had made a butterfly, with a long ribbon, adorned with the inscription: “In memory of the victims of the port of Beirut”.

Total of the first two international conferences in 2020

According to UNICEF, every third family has children who still show signs of “psychological distress”

“Takeable” in the first round | Marine Le Pen is “very fragile,” says one of his opponents