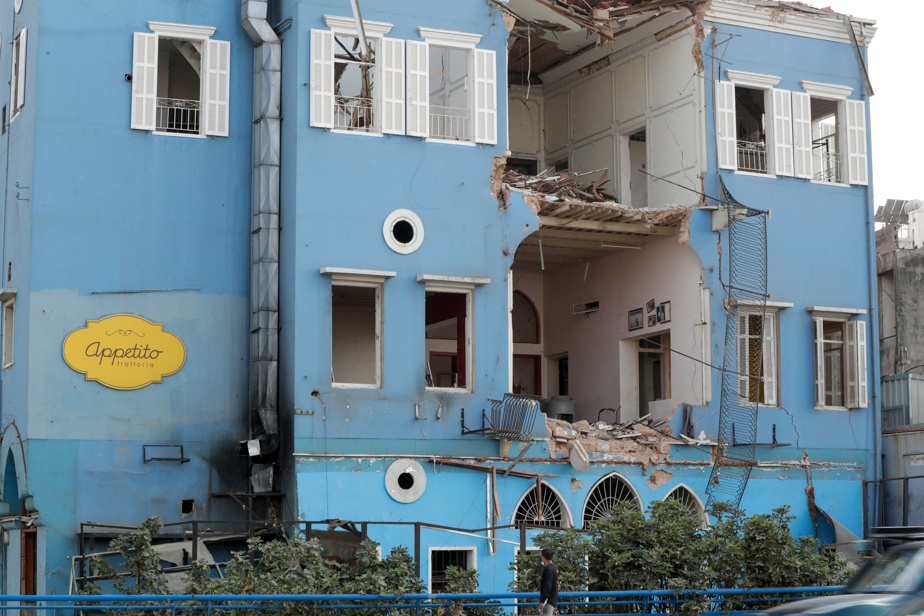 Destroyed by the fatal explosion in August 2020, the Gemmayzé and Mar Mikhaël districts in Beirut, oases of peace for the Lebanese LGBTQ + community, lie in ruins a year later. Some still lack access to care or have returned to their homes, condemning homosexuals and transgender people.

In Gemmayzé and Mar Mikhaël there were not only trendy bars, nightclubs and restaurants. These districts of Beirut, which were destroyed by the explosion, were safe places for the LGBTQ + community of the Lebanese metropolis.

No longer. A year later, the places where drag queens, transgender and gay couples found a semblance of tolerance far from conservative circles are far from being rebuilt.

Street in the Gemmayzé district, a few weeks after the devastating explosion on August 4, 2020 in the port of Beirut

Dozens of LGBTQ + residents of these progressive enclaves were destitute. Many are poor and homeless and have had a difficult return to their neighborhoods of origin, less open environments. Sometimes they even had to return to live with marginalized families.

“I still have a small piece of glass in my eye. The costs in connection with the operation are too expensive for me, ”says Hamada *, make-up artist, in a choppy voice, short of breath, as if she had just run the marathon. She had to go out of her way to get access to a phone to conduct the interview with La Presse. In addition, the interview is stretching because she is constantly losing the line due to recurring power outages.

Hamada is non-binary. Sometimes she shows herself as a woman, sometimes as a man.

The Gemmayzé and Mar Mikhaël neighborhoods, razed to the ground by the explosion in the port of Beirut, were safe places for the LGBTQ + community.

Mohamed Metwally, a Beirut-based Egyptian who worked for a local LGBTQ + organization before the explosion, loaned him some money to make the call. “His cell phone was destroyed in the explosion,” continues the interpreter for Hamada, who speaks only Arabic.

LGBTQ + people already have difficult access to health care. In times of crisis, it is worse, denounces Hamada. “I’ve found a surgeon. He agrees to operate my eye for free. My eyesight is deteriorating. But I can’t afford the taxi and the test [de dépistage de la] COVID-19 needs to be hospitalized. ”

On August 4, 2020, the professional makeup artist saw her world capsize. The glass facade and antique mirrors of his renovated accommodation in Gemmayzé were smashed.

Shards of glass pierced his body. “There was nobody in the world who could help me. Since then she has lost the use of her right hand. “I just want to be able to heal and work,” she begs with a long sob.

She had to return penniless to her family, which did not accept her gender identity. She no longer waits for her destroyed apartment to be rebuilt, she recalls. She just wants to regain her physical health which will make her return to her job.

“I’m tired of saying that the Lebanese people are resilient. We are not resilient, we suffer. We have to stop embellishing the lot of LGBTQ + people even though we are in a country that is more open to the Middle East. We no longer have a safe space, ”protests Sasha *, a transgender woman from Beirut. She has neither money nor an apartment, she admits on the phone. “I live with friends. I can’t afford to pay for my mother’s treatment, who was injured in the blast. ”

Post-traumatic stress paralyzed her on August 4th, a year after the tragedy. She was not injured in the explosions. She wanted to leave Beirut to get the bloody pictures, the broken glass and the screams, the pained faces that populate her nightmares out of her head.

She wants to continue to stay in Lebanon to support her community. She has been organizing fundraising campaigns for a year. “We were able to raise $ 100,000. I want to stay to do my part. ”

For someone who is “not in the norm”, the loss of their home means the loss of a place where they feel protected. If you flee your neighborhood, you run the risk of being abused and discriminated against, says Ian Abinackle. The Lebanese Montreal resident was shaken by the catastrophic fate of some members of the LGBTQ + community during a visit to Beirut in April 2020.

Even if there is a spirit of tolerance in some places, Lebanon is still one of the countries where gays, lesbians or transgender people remain a crime.

Born in Beirut, Mr. Abinackle was director of the Divers / Cité Festival in Montreal for over 15 years.

He knew the neighborhoods near the explosion. “These are modern neighborhoods that are frequented by students, in which people who are perceived by society as different feel more comfortable. We are more open to it. ”

He found out about last summer’s disaster and then found that LGBTQ + communities had been hit twice. Last April he decided to go there to document these stories so that they would not be forgotten. He met 14 people in eight days and gathered heartbreaking stories. “Sometimes it’s me who asks for a break when the person tells it [son histoire]because I was devastated. ”

Concerned, Mr. Abinackle decided to organize a fundraiser from Montreal to help people in need. “When we celebrate Pride in Montreal, you need to know that it’s not just a festival. There are people here and elsewhere who are still being judged for who they are. ”

He remains in awe of the strength of the likes of Hamada and Sasha.

“I thought I was going to make victims, I met philosophers of life who have learned to stand up in suffering. ”

* As their gender identity is not known to everyone around them, workers preferred not to reveal their last name for fear of being identified.

Russian hackers disappear without a trace

Spahn for simpler rules for Corona in school classes |

Commentary: A CDU team with an uncertain future |

Germans are divided when it comes to accepting refugees |