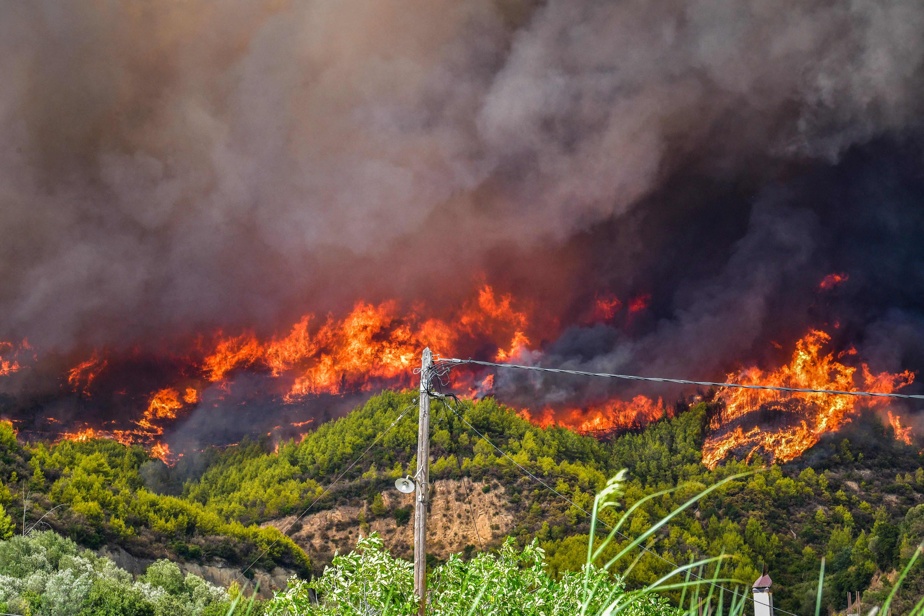 (Athens) A dozen villages were surrounded by flames on Wednesday on the island of Evia, 200 km from Athens.

The huge flames that rose from the forest and were visible from the sea testified to the severity of the disaster, which, according to the firefighters, seemed uncontrollable due to the rugged terrain and the lack of visibility.

When twelve endangered villages and hamlets were evacuated, three monks finally left, according to the Greek news agency ANA, who initially refused to leave St. David’s monastery, located on a mountain near Rovies in northern Evia.

According to the ANA, authorities have asked residents of Rovies and the surrounding villages to leave their homes and gather on the beach.

About 85 people gathered on the beach Wednesday afternoon and were evacuated from boats.

A Sikorsky S-64 helicopter fights the flames near ancient Olympia.

A hundred firefighters, supported by seven helicopters and water bombers, were mobilized to fight this fire, the front of which was estimated to be about twenty kilometers.

The mayors of two towns denounced the lack of resources. “We urge the authorities to increase the air and ground forces so as not to risk human lives,” Giorgos Tsapourniotis, Mayor of Limni, told ANA.

“No air was used to extinguish the fire,” argued Argyris Liaskos, the deputy mayor of Mantoudiou. “At least 150 houses burned down,” he told Skai TV.

Under the influence of an extraordinary heat wave with temperatures in excess of 40 degrees, Greece had to deal with 118 fires in the last 24 hours, according to Deputy Minister for Civil Protection Nikos Hardalias.

“We are fighting a gigantic battle! The minister said this at a press conference on Wednesday. “The hardest part is yet to come,” he added.

A fire broke out near the village of ancient Olympia in the west of the Peloponnese peninsula, firefighters said.

“Everything that can be done to protect the museum and the archaeological site from the flames where the Olympic Games began has been achieved,” said Culture Minister Lina Mendoni on Wednesday evening.

But on Wednesday evening the fire continued to approach the place. “The firefighters are fighting a big battle to keep the fire from reaching the archaeological site,” Deputy Prefect Vassilis Giannopoulos told ANA.

According to the fire brigade, a hundred firefighters have been mobilized there, supported by three helicopters and two aircraft.

Seven villages have been evacuated as a precaution and part of the main road between Tripoli and Pyrgos has been closed, according to the same source.

As part of the EU Civil Protection Mechanism, two firefighting planes from Cyprus and two from Sweden are to assist Greece.

Further fires were in progress in Chalkidiki (north) and in the south of the Peloponnese (west). The disaster was brought under control on the island of Rhodes on Wednesday.

A fire that broke out outside Athens on Tuesday should be brought under control on Wednesday after it destroyed nearly 1,250 hectares of pine forest at the foot of Mount Parnes, according to Deputy Civil Protection Minister Nikos Hardalias. The fire brigade will be present overnight from Wednesday to Thursday to avoid recovery, he said.

In Athens, authorities recommended that everyone stay indoors as much as possible or wear a mask to protect themselves from ash and particles.

Dozens of people with respiratory problems have called an emergency service, according to the health service.

Louisiana in the face of damage from Hurricane Ida

Afghanistan | At least four dead in the kamikaze attack in Kabul