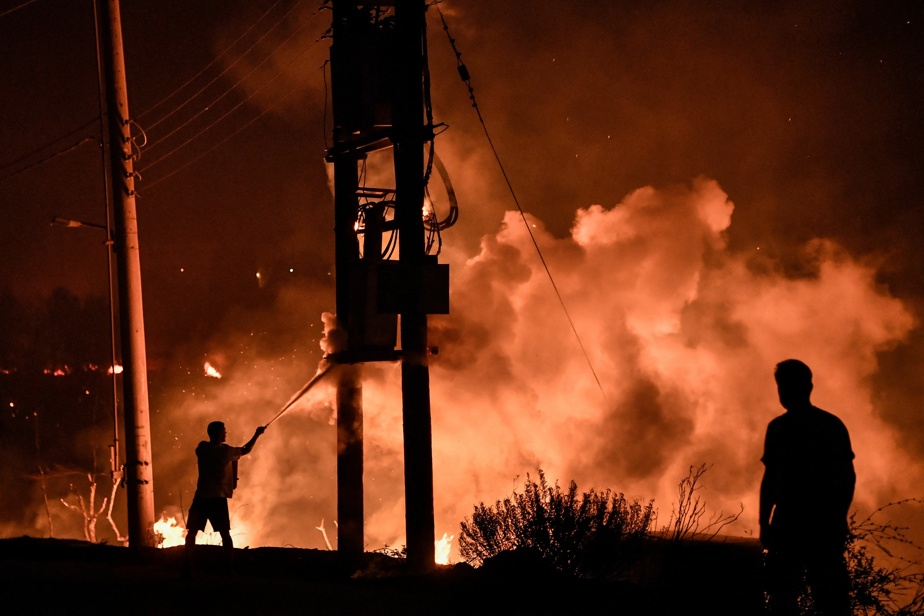 (Athens) Greece was hit by new forest fires on Tuesday, particularly north of Athens, where around 300 people have been evacuated, firefighters said.

After Mount Penteli last week, it was Mount Parnes, the second of three hills on the border with Athens, that caught fire on Tuesday, spreading thick smoke over the Greek capital.

As the fires neared the houses, three villages at the foot of Mount Parnes, about thirty kilometers northwest of Athens, were evacuated, according to the fire department.

“Our priority is to save lives, hence the decision to evacuate villages,” said the Minister for Civil Protection, Michalis Chryssohoidis, during a press conference on Tuesday evening, citing difficult conditions.

“It’s a tragedy,” confided the television station Skai Spyros Vrettos to the mayor of the capital Acharnon. “Fortunately, nobody’s life is in danger.”

The highway that connects the north with the south of the country has been cut as a precaution and dozens of children have been evacuated from a summer camp, according to Greek media.

Almost 200 horses that were in equestrian centers were also moved unharmed, according to the Greek Equestrian Association.

Police said they helped nearly 70 people stranded in their homes in communities surrounded by flames.

Civil defense said it had sent messages to Varympompi residents on Mount Parnes to keep them on alert.

Varympompi is located near the old royal palace of Tatoï, where valuable works were protected as a precaution.

According to the fire brigade, more than 500 firefighters, 70 trucks, five helicopters and seven water bombers are mobilized in Varympompi.

A resident of the Open TV channel asks angrily: “There was no wind. How could the fire fighters not put out this fire quickly? “.

According to the Greek news agency ANA, sixteen unaccompanied minor migrants from the Amygdaleza prison camp near the fire were transferred to a camp in Attica as a precaution. If necessary, according to the ANA, other migrants could also be relocated to other structures.

Giannis Antetokounmpo, the Greek-Nigerian basketball player and NBA champion who was supposed to meet his admirers in his hometown of Sepolia, canceled the event because of the fire.

“We hope that there are no injuries in the fire. We’re obviously moving the party to Sepolia, ”he said on Twitter.

Greece faced nearly 80 fires on Tuesday, 40 of which are still active, according to Deputy Minister for Civil Protection Nikos Hardalias.

“We are faced with extreme conditions in Attica with temperatures around 45 ° C,” added the minister during the same press conference.

“The next few hours are crucial. The heat wave will continue, we ask citizens to be vigilant, ”he concluded.

In the south of the Peloponnese peninsula, 300 km from Athens, three villages were evacuated after a fire on Tuesday afternoon.

On the island of Kos in the Dodecanese archipelago in the Aegean Sea, firefighters finally brought a forest fire under control on Tuesday evening.

Firefighters struggled to contain another major disaster that had been underway on the tourist island of Rhodes since Sunday and continued to devour a forest on Tuesday.

Greece has been hit by the “worst heat wave” in more than thirty years since last week, according to Greek Prime Minister Kyriakos Mitsotakis.