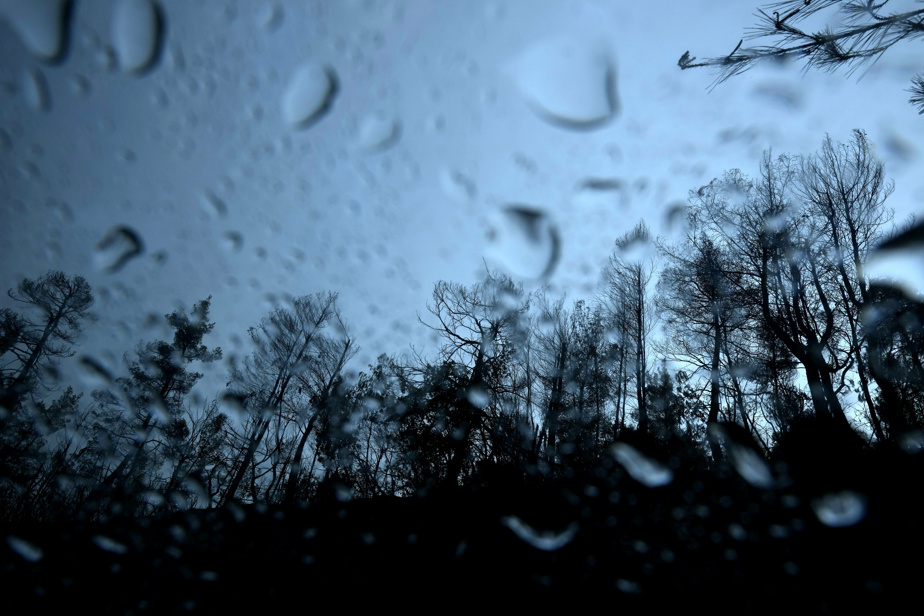 (Athens) Night rains in the fire-hit areas of Greece helped “improve the situation”, according to a Peloponnese mayor on Thursday, as hundreds of firefighters and local residents continued to fight relentlessly against the flames.

More than two weeks after the violent fires broke out, which devastated around 90,000 hectares in several parts of Greece and left three people dead, Greek Prime Minister Kyriakos Mitsotakis once again lamented “an immense ecological catastrophe”.

Speaking to the press on Thursday, he attributed the fires to climate change, insisting that it was “not a Greek phenomenon,” citing Turkey, Italy and Algeria, which were also affected by major fires.

According to the Deputy Minister for Civil Protection, 586 fires devastated several regions of the country within a few days.

Several fires remained active, particularly on the island of Evia, which has been badly hit since August 3, and on the Peloponnese peninsula.

“The fire fronts are still active” on the island of Euboea and in three parts of the Peloponnese: in Arcadia, Messinia and Mani, where “the resumes are constant,” said AFP a service director of the fire department.

Concerns also reappeared in the outskirts of the Greek capital, where a fire broke out in the bushes on Thursday morning in Aspropyrgos, an industrial area around thirty kilometers west of Athens.

At the height of the devastating fires caused by scorching temperatures at the beginning of August, the flames had reached the gates of Athens and charged the sky of the 4 million-inhabitant metropolis with gray smoke.

Greece was used to the hot summer heat, but it was hit by the worst heat wave in three decades.

Thursday, it’s also on the weather side that eyes turned with a drop in temperature expected with great relief in a country where mercury climbed well above 40 ° in early August, with peaks at 45 °.

In Athens, the temperature on Thursday should not exceed 34 °, according to weather services, with little rain being expected.

These fires resulted in the evacuation of thousands of residents, immense destruction and significant environmental damage.

Experts clearly link this heat wave to climate change, while a preliminary UN report to which AFP had access called the Mediterranean a “hotspot of climate change”.

Northern Algeria has also been ravaged by dozens of fires fueled by extreme heat, with at least 69 dead.

In Greece, overnight rains fell on the island of Evia, the Peloponnese and central Greece, which helped “improve the situation,” said Stathis Koulis, the mayor of Gortynia.

This village in the mountainous and inaccessible region of Arcadia in the Peloponnese is the main fire point of the peninsula. More than twenty surrounding villages were evacuated and around 680 firefighters were mobilized day and night.

But even with the persistent doldrums, the risk of a revival remains high.

Forecasts by the European Forest Fire Information System (EFFIS) therefore suggest that “forest fires will continue as long as there is no significant rainfall,” he said. AFP Thomas Smith, Professor of Geography at the London School of Economics.

In North Evia, where hundreds of residents had been evacuated by boat, 858 firefighters, including reinforcements from Ukraine, Romania and Serbia, fought relentlessly against the fire.

In the devastated areas, residents were desperate to see the extent of the damage, especially the shepherds who lost their animals that had been charred by the fire.

“I am lost,” sighs one of them, Kostis Angelou, whom AFP meets on the island of Evia, while the carcasses of his 372 goats lie on the slopes of a blackened hill.

“We’re done, what should we do? », Continues his father Spyros Angelou, 73 years old.

Hundreds of people demonstrate in Kabul |

Report: Taliban allow more than 200 people to leave the country |