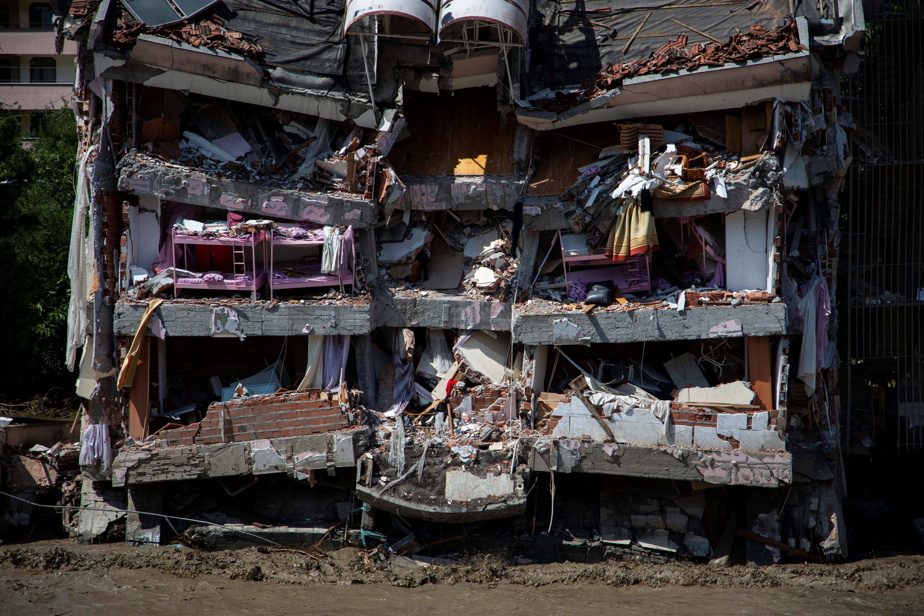 (Istanbul) Floods on a scale unprecedented for decades left at least 38 dead in Turkey in the north, where President Recep Tayyip Erdogan promised the victims the necessary support on Friday.

In the province of Kastamonu, which lies on the coast of the Black Sea, 32 people died and six in the neighboring province of Sinop, according to a preliminary report by the government agency for natural disaster management (Afad). An unknown number of people are also missing.

Aerial view over the city of Bozkurt

For many experts, natural disasters like the ones that follow one another in this country are likely to become more frequent and severe due to human-induced global warming.

As a sign of the gravity of the situation, President Erdogan went to one of the areas hardest hit by the floods, the Bozkurt district in Kastamonu province, where an eight-story residential building collapsed.

President Tayyip Erdogan greets the residents of Bozkurt during his visit.

“Your pain is the pain of all of us. The state is by your side by all means, ”said Mr Erdogan before attending the funerals of the victims.

“I’ve never seen that before”

Shocked, some survivors began to express their anger at the local authorities, accusing them of not reacting quickly enough to get the population to safety.

“We were only told to get our vehicles to safety as the river threatened to overflow. We weren’t told to save our lives or that of our children, ”lamented Arzu Yücel, whose twin daughters and in-laws disappeared after their building collapsed.

“If we had been warned, we would have left in less than five minutes […] We were not asked to evacuate, ”she added with a sob, quoted by the DHA news agency.

Due to heavy rainfall, the water in some cities reached a height of up to four meters, according to the authorities, and the streets of entire cities turned into torrents with cars and all kinds of rubble.

Adem Senol, 75, saw water around his home in Bartin Province within minutes.

“I’ve never seen anything like it in my life,” he told the state news agency Anadolu. “The water rose higher than our windows, broke our door and even the wall of our garden,” he added.

“This is the worst flood I’ve ever seen,” said Interior Minister Süleyman Soylu on Thursday during a trip to the disaster areas.

Given the rising water, the rescue workers had to evacuate 45 patients from a hospital in the coastal region of Sinop.

Images broadcast on television and social media showed villagers taking refuge on the roofs of their homes while being evacuated by helicopter.

Almost 200 villages were still without electricity on Friday, the authorities said.

The weather service forecasts persistent rainfall in the affected areas for the rest of the week.

The Turkish states bordering the Black Sea are often exposed to flooding. Last month, six people died in Rize, in the northeast.

After torrential rain in Rize, a landslide occurred on July 15th.

After the repeated natural disasters in Turkey, several politicians and associations have increased the pressure on Mr Erdogan to take radical measures to reduce greenhouse gas emissions.

In view of the two-year elections, which are already proving difficult for Mr Erdogan against the background of economic problems, these natural disasters are a political issue.

During a trip to the regions affected by the fire at the end of July, the Turkish president caused an outcry by throwing packets of tea from the roof of a bus to the survivors.

In old Aleppo, long-established businesses are threatened with emigration