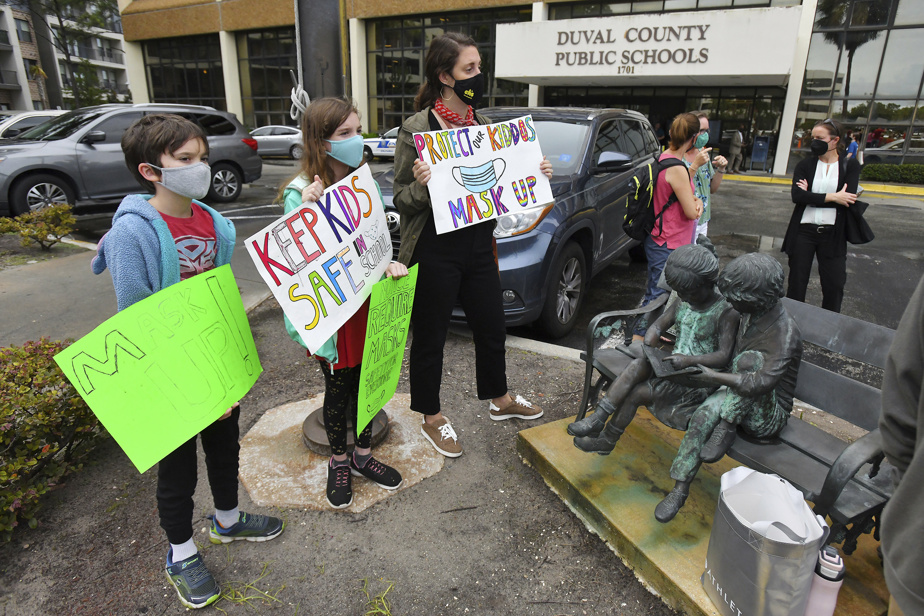 (Miami) More and more American children are caught in the wave of COVID-19 infections caused by the Delta variant in the United States, causing concern among parents and fueling political controversy shortly before schools reopen.

The current outbreak of the epidemic is particularly focused in Florida, where some school districts have announced plans to challenge the governor’s order banning them from wearing masks.

“Parents are in an impossible situation; they have to choose between health, their child’s life and going back to school,” protested parents of children with disabilities in a complaint filed Friday against the governor’s decision.

The majority of infected children will have mild or no symptoms, and so far this population has not been of the greatest concern.

But with Delta, a highly contagious variant, that changes. This is largely responsible for the 72,000 cases in children and adolescents registered in one week at the end of July, according to a study by the American Academy of Pediatrics – a number five times higher than at the end of June .

There have been nearly 20,000 cases in Florida, according to the state, which also has the highest number of underage hospital admissions in the country – 143 today.

“We have undoubtedly seen an increase in cases here, in the emergency room and also in other departments of the hospital in the past two or three weeks,” confirmed AFP doctor Marcos Mestre, medical director at a hospital.

Tension around the mask

Only about 1% of children diagnosed with COVID-19 are hospitalized, he said, with complications being more likely in children with diabetes or obesity.

While studies have confirmed Delta is the most contagious variety today, it is still not certain whether it causes more severe forms of the disease.

Preliminary data suggests this could be the case in both adults and children, but research has yet to find out more, according to Rochelle Walensky, director of the Centers for Disease Control and Prevention (CDC), the country’s lead agency.

One thing is clear: the regions in the northeastern United States, where vaccination rates are very high, have the lowest numbers of infections among younger people. In other words, children are safest where adults are least vaccinated.

With the number of cases exceeding that of the summer outbreak a year ago, the CDC is now recommending that students, teachers and school staff keep their masks on, regardless of whether they are vaccinated or not.

But Florida Republican Governor Ron DeSantis is threatening to cut funding for schools that wish to follow these recommendations by re-imposing mask requirements.

The solution: the vaccine

Several school districts, including the second largest in Florida, have announced that they will challenge the governor’s order.

The political struggle has been attributed to the White House, President Joe Biden had asked unruly local leaders this week, “If you don’t help us, at least you won’t get in our way.”

The answer came quickly: “If you’re looking for parenting rights in Florida, I’ll stand in your way,” said Ron DeSantis.

According to Dr. Mobeen Rathore, an infectious disease specialist in Jacksonville, found it a mistake to minimize the risks in the youngest.

Children “get sick, are hospitalized” and some die of COVID-19, the doctor who supports wearing masks at school told AFP.

Like adults, children have to be vaccinated at some point, he says.

The Pfizer / BioNTech vaccine was approved in the US at age 12 in May, but clinical trials for younger children are still ongoing.

At a vaccination center in Miami, 33-year-old Sara Medina told AFP that she was relieved that the vaccine paved the way for her 12-year-old son Jayden to return to school.

Pediatricians are strongly committed to ensuring that children can go back to school in person, which benefits their mental health, their academic, but also social learning.

“It’s important to have [le masque] just in case, ”says Jayden. “So that we are all safe. ”

Afghanistan | Escape from the Taliban

Laschet in Not: “Future Team” should turn things around |