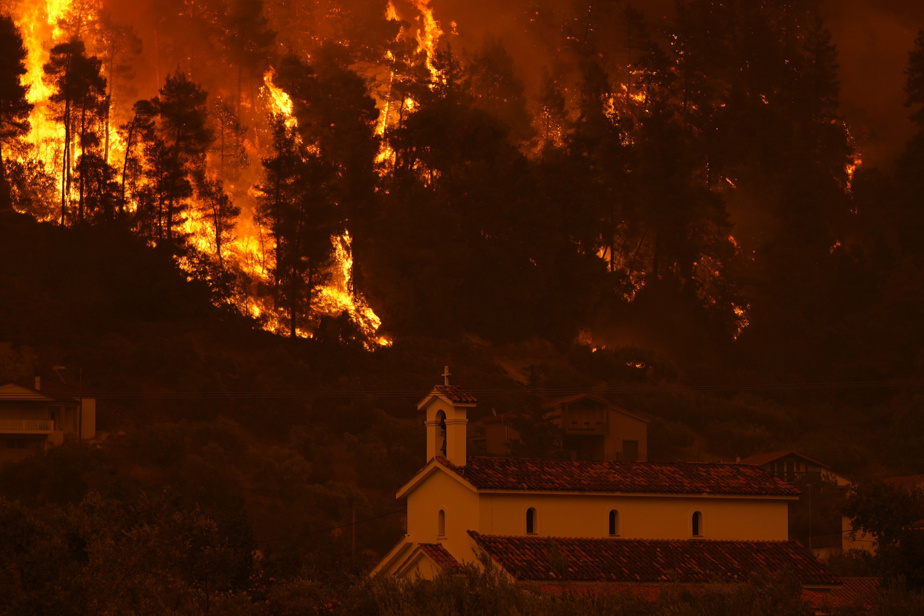 (Gouves) Thousands of desperate inhabitants of the Greek island of Evia in flames saw the fire that consumed their villages and their land like “living dead” on Sunday on the 12th day of a wave of forest fires in Greece and Turkey.

While most of the fires were brought under control in Turkey on Sunday, the disaster on the island of Evia, the second largest in Greece, remained the most worrying in the country.

“From what we can see, the fire is far from under control,” the mayor of Mantoudi, a municipality in Evia, told Skai TV.

For six days in the grip of fire, this headland between Attica and the Aegean Sea offered an apocalyptic panorama. Residents along the streets sprayed their land with water as flames hit the dense forest areas.

Greece and Turkey have been going through an extraordinary heat wave for almost two weeks. The fires, fueled by the scorching temperatures, killed eight people in Turkey, two in Greece and dozens of hospital patients.

At the gates of Athens, the disaster that destroyed dozens of homes and businesses had subsided on Sunday, according to Greek firefighters.

But fire fighters were still fighting the flames on both sides of the Aegean Sea in the Mugla region of Turkey and on the Greek Peloponnese peninsula, where the situation stabilized on Sunday.

Part of the forest in Senyayla village near Mugla is on fire.

According to NTV, six quarters in the Turkish city of Yatagan were evacuated as a precaution, to entire villages of Mani and Messinia in Greece.

The biggest nightmare of the Greek firefighters on Sunday remained the huge, pine-covered mountain island of Evia, which traditionally attracts Greek and foreign tourists.

“We have seen fires, but this situation is unknown,” complains Nikos Papaioannou, a resident of Gouves, a village overlooked by high flames.

The people of Gouves on the island of Evia watch the flames ravaging the mountains around the village.

Despite the rugged terrain, nearly 500 firefighters continued their fierce battle against the fire in the north of the island, which burned from east to west, wrapped in a thick cloud of smoke and sprayed with a shower of ash, an AFP team noted.

According to the Greek fire brigade, these include around 200 firefighters from Ukraine and Romania, reinforced by seven depth bombers and helicopters.

However, due to the direction of the wind, the thick smoke and the lack of visibility, the Greek Deputy Minister for Civil Protection Nikos Hardalias considered the use of air resources to be “difficult”.

“The forces are not enough,” hammered Giorgos Kelaïtzidis, lieutenant governor of Evia. “The situation is critical at the moment,” he said, “we are fighting a gigantic battle”.

According to him, at least 35,000 acres and hundreds of houses have burned down.

Estimated at 30 km: “The front is too big. We are trying to save the village, but the means are not enough, ”complains Nikos Papaioannou. “It’s dramatic. We will all end up in the sea ”.

Around 2,000 islanders were evacuated and relocated to hotels.

At Pefki Beach, where 350 other residents were evacuated on Sunday, ferries and military ships were waiting to pick up elderly and disabled people who regularly introduced themselves.

As the flames spread towards Istiaia town, engulfing houses and pine forests, a resident Iraklis estimated on Open TV that “40,000 people will be living dead in the next few years due to the destruction of the region.”

“We won’t have any work for the next 40 years,” said Yannis Selimis, also a resident of Gouves, desperately.

In the village where many of their land live, the young man believes that “the state is absent. If the people leave, the villages will burn […] We are left in God’s hands ”.

“North Evia has almost disappeared from the map,” criticized Nasos Iliopoulos, spokesman for the largest opposition party Syriza. “It is tragic to see so many fires out of control for days,” he said, seeing “serious responsibility”.

COVID-19 | Moderna is withdrawing 1.63 million cans in Japan due to an anomaly

Pope accidentally puts a quote from Putin in Merkel’s mouth |