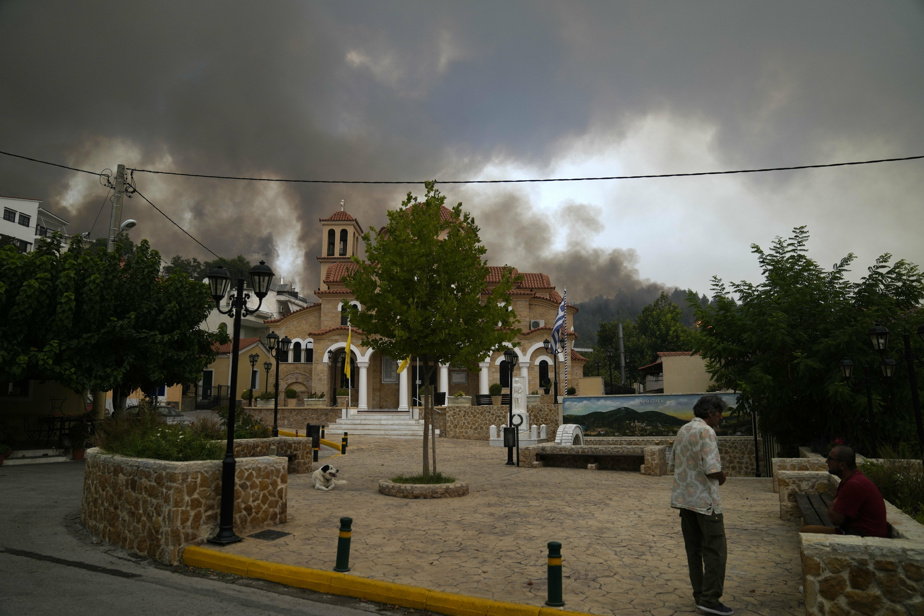 (Athens) Several regions of Greece continued to burn on Friday after a week of heatwave which, according to Greek Prime Minister Kyriakos Mitsotakis, “turned the country into a powder keg” while neighboring Turkey faced such a critical situation.

The Greek capital woke again to a pungent smell and opaque smoke from the fire that flared up again on Thursday afternoon at the foot of Mount Parnes after burning more than 1,200 hectares since Tuesday.

The three mountains that surround Athens disappeared in the thick fog, just like Mount Lycabettus, exactly in the middle, also invisible.

Residents of the village of Afidnes watch a house burn.

“Our country is in an extremely critical situation,” said Greek Prime Minister Kyriakos Mitsotakis on Thursday evening as he faced dozens of fires that have consumed Greece for a week under the influence of scorching temperatures.

“We are facing unprecedented conditions as several days of the heat wave turned the whole country into a powder keg,” he added in a televised emergency address.

With temperatures between 40 and 45 degrees Celsius, Greece and Turkey are experiencing an extraordinary heat wave, which, according to Mitsotakis, is the “worst” for the Greeks in more than 30 years.

In the two neighboring countries, forests burned, houses and shops were devastated, and hundreds of residents and tourists were evacuated.

The owners of this house are watching the fire damage in the village of Drosopigi, about 28 km north of Athens, Greece.

On the Turkish side of the Aegean Sea, 208 fires have been counted since the end of July, of which 12 were still ongoing and 196 were brought under control, according to the Turkish Presidency.

On the Greek side, the Deputy Minister for Civil Protection Nikos Hardalias estimated that 57 of the 99 fires counted on Thursday were still active in the evening, especially on the island of Evia and the Peloponnese, in the west and east of the country.

Eight people have died and dozens have been hospitalized in southern Turkey. In Greece, 16 people suffered minor burns or were hospitalized for respiratory problems.

“It’s a very sad moment,” Konstantinos Konstantinidis, a resident of Kourkouloi, one of the 18 villages evacuated from the Greek island of Evia, 200 km east of Athens, told AFP.

“It’s a catastrophe, everything burned down in the village,” complains Ioannis Aslanis, another villager. “I saved what I could,” he adds, devastated.

Across the border, in the port of Oren, Hulusi Kinic refused on Thursday to follow the hundreds of villagers evacuated by sea from near the Milas thermal power station.

Residents of Milas in southwest Turkey had to be evacuated because of a forest fire.

The fire, which had come dangerously close to the thermal power station filled with thousands of tons of coal, was extinguished on Thursday and the cooling work continued on Friday, according to the Mugla municipality.

The race against fire started on Friday the 10th.

In Greece, along with worrying hot spots on Evia Island and several parts of the Peloponnese peninsula, the wind-blown flames were strongest in the village of Afidnes, 30 km north of Athens, noted a photographer and videographer from AFP.

At noon the flames reached the first houses of Krioneri, not far from Afidnes. Part of the motorway connecting the north with the south of the country was cut off as a precaution, while 2,000 migrants were evacuated from the camp near Ritsona. And at least 450 Greek firefighters tried to overcome them, aided by air and land resources and French, Swedish, Romanian, Swiss and Cypriot reinforcements.

The Greek civil protection continued to send warning texts on Friday warning travelers and Greeks of the “extreme risk of fire in the coming days”.

The authorities also recommend “closing the chimneys, windows and doors to prevent sparks from entering the buildings”.

They prohibit “access to forests and wooded areas” and advise “avoiding any movement” because of the air pollution in the greater Athens area.

The Athens observatory warned that the air quality there was “bad”. Faces veiled to protect themselves from harmful particles, some tourists braved the stuffy atmosphere to climb to the Acropolis at dawn before closing in the hottest hours.

Australia | The “zero COVID-19” strategy threatened by the delta variant