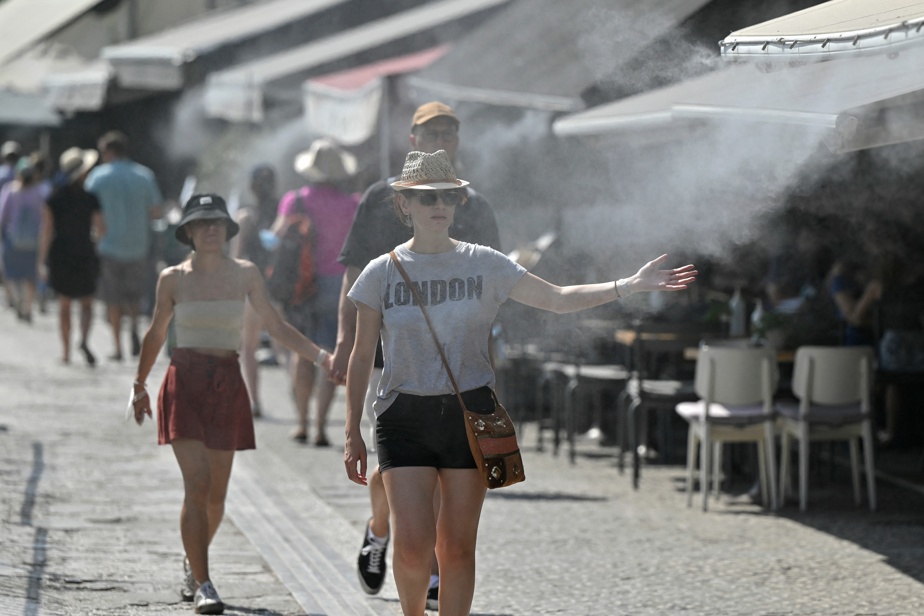 (Athens) The heat wave that swept across southeast Europe and Turkey on Thursday drove residents to beaches, air-conditioned spots and even public fountains in search of some cooling.

The heat has also exacerbated the forest fires that are burning in some places. Three deaths and dozen of hospital admissions are reported from southern Turkey.

More than 40 ℃ in several regions

Mercury has exceeded 40 ℃ in several regions, particularly Greece. Meteorologists have warned that the Athens heat wave is likely to last for a few more days, making it one of the worst events of its kind since the mid-1980s.

Air-conditioned accommodation has opened in the Greek capital, but access to air-conditioned public places has been restricted by health regulations.

“The ongoing heat wave is a dangerous meteorological phenomenon that will last at least until the end of next week, with a small difference between the minimum and maximum temperatures,” said the director of the Greek Meteorological Service, Theodoris Kolydas.

In Greece, bush fires threatened homes for the third day in a row. The flames burned mainly near the third largest city in the country, Patras, in the west of the country.

The heads of state and government of Serbia, Bulgaria, Bosnia and Herzegovina and other affected countries have called on the population to avoid direct sunlight in the middle of the day.

In North Macedonia, pregnant women and people over the age of 60 have been given permission to stay away from work until the end of the week. Construction companies have been instructed to cease their activities between 11 a.m. and 5 p.m.

“If we look at it globally, we recently had very serious weather events, 49.6 degrees Celsius, an all-time high in Canada,” said climatologist Mike Kendon of the World Meteorological Organization.

When we see such observations, we move away from what we saw before. Such an event simply cannot be explained without human influence on the climate.

According to the UN agency, 2020 was one of the three hottest years on record. It was the hottest year ever recorded in Europe.

Across the continent, a study published Thursday warns the UK is getting hotter and wetter due to climate change, suggesting that it recorded the ten warmest years of the last century since 2002.

The annual State of the UK Climate Report published by the International Journal of Climatology adds that 2020 was the fifth wettest and third warmest year since the 19th century. Last winter in the UK it was an average of 5.3 degrees Celsius, 1.6 degrees higher than the 1981-2010 average.

The summer temperature was 0.4 degrees above the average of 14.8 degrees Celsius. He managed at least 34 ℃ for six consecutive days in August 2020.

The report warns that mercury in the UK will rise to 40 ℃ in the next few years, even if the world manages to limit global warming to 1.5 degrees above pre-industrial levels.

The majority want to send the Union into the opposition |