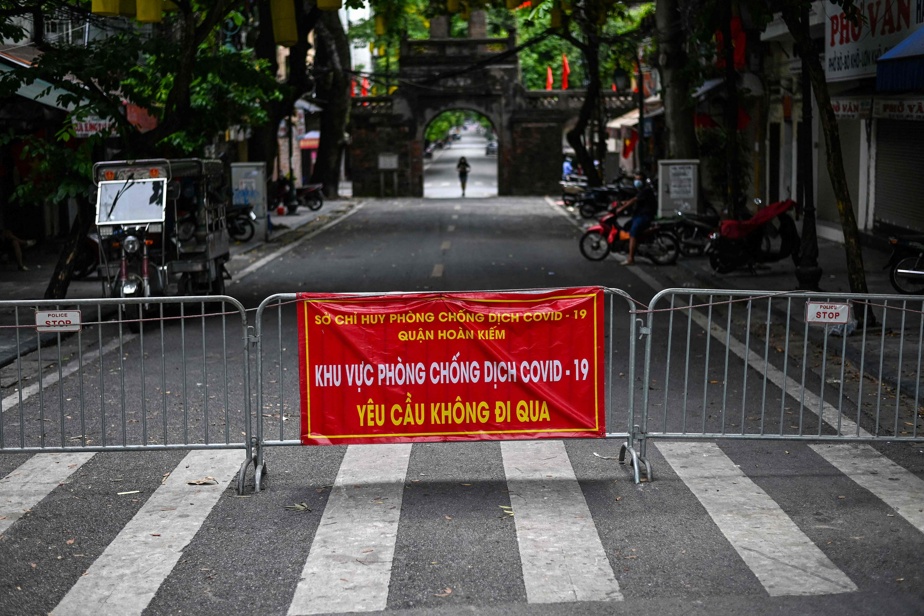 (Hanoi) Metal barriers, bamboo, barbed wire, hastily stacked crates of beer on the streets of Hanoi to prevent the locals from moving and spreading the coronavirus make the Vietnamese capital look like an open-air prison.

“It feels like being in a detention center,” sighs Ho Thi Anh, 72, whose neighborhood, surrounded by these makeshift barricades, has taken on the appearance of an entrenched camp.

“All corridors that lead to my house are cordoned off. Relatives deposit food in front of the barriers every three days, ”she told AFP.

Unheard of, even between 1945 and 1975 in the dark hours of the wars against France and the USA.

The eight million residents have been ordered to lock themselves up since the end of July, but movement restrictions are increasingly tightened as the coronavirus wave, which the city is still relatively unaffected, wreaks havoc in the south, particularly in Ho Chi Minh City.

Hanoi today is divided into a multitude of sectors that it has become very difficult to travel between.

The aim of the barricades: isolate an area as soon as a case of COVID-19 is detected and cordon off neighborhoods spared from the epidemic.

“Our sector is blue, virus-free. I take care to make sure no stranger comes in […] We don’t want COVID-19 at home, ”says Nguyen Ha Van, who voluntarily stands guard in front of the narrow alley that leads to his house.

Punished by the slowness of its vaccination campaign, Vietnam, which in 2020 was celebrated as a model country in the fight against the epidemic with its strict quarantine and monitoring of the infected, is experiencing a severe backlash.

The authorities have registered more than 10,000 deaths since the end of July, compared to just a few dozen in the previous year.

Thousands of soldiers and reservists on duty

Ho Chi Minh City, the economic heart of the country, is at the center of the storm and has taken on the appearance of a besieged city.

The army has dispatched thousands of soldiers and reservists there to enforce restrictions and distribute food bags to residents locked in their homes.

The health system of the metropolis with a population of nine million is under pressure.

“My watch is between 7 a.m. and midnight, sometimes all night,” Truong Van Anh, a doctor at a makeshift hospital with more than 2,000 beds who had slept there for more than a month, told AFP in mid-August.

Since then, 17,000 nurses from other provinces have been deployed as reinforcements.

More than half of the 98 million Vietnamese are now subject to travel restrictions.

The country is very slow to implement its vaccination campaign: only 17% of the population have received a vaccine dose, 2.6% are fully vaccinated.

The communist regime fought for the money and called on the population to donate.

The United States and China have offered several million doses and trade agreements have been signed with the American laboratories Pfizer and Moderna, the Swedish-British AstraZeneca and the Chinese Sinovac.

Objective: Attempt to inject at least one dose into 70% of the population by April 2022.