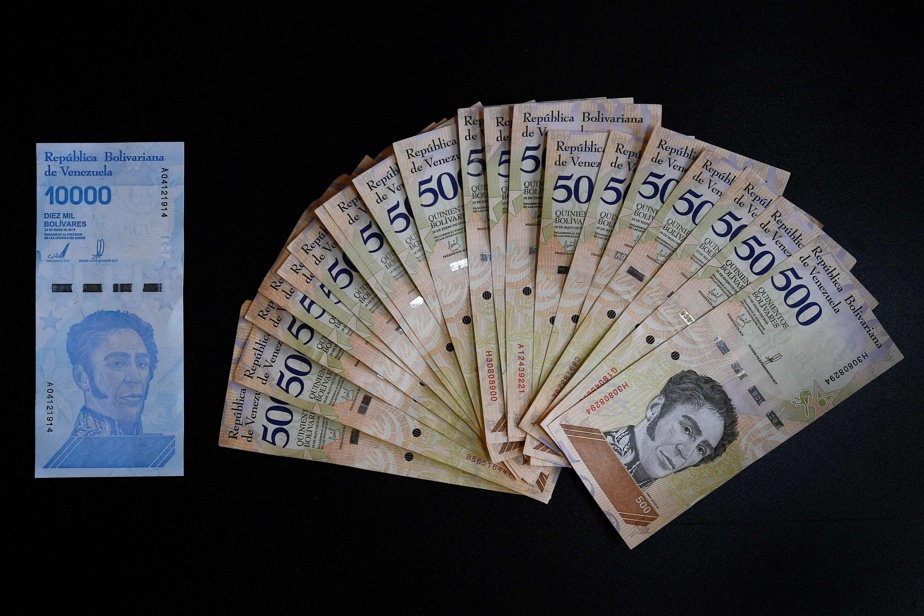 (Caracas) Venezuela will remove six zeros from its currency, the bolivar, on October 1st, as hyperinflation has drained its value and dollarized the economy, the central bank said on Thursday.

In 13 years the bolivar will have lost 14 zeros, a sign of the gradual devaluation that has been imposed on the government.

“From October 1, the digital bolivar will come into effect when a new currency scale is applied that removes six zeros from the local currency,” said a statement from the central bank of a country that has seen the economy growing in recent months.

Venezuela, once a rich oil country, has seen its GDP shrink by 80% since 2013 and 65% of households live in poverty.

The country will be printing new banknotes to accompany the measure as they are almost out of circulation in the country. Most non-dollar exchanges are processed digitally (card payments, wire transfers, or bank transfers).

This decision aims to “facilitate” the use of money by reducing it to “simpler monetary standards”, the text continues.

According to the Central Bank, “this change in the supply of money, based on the deepening and development of the digital economy, is a historical fact as the country after a crisis caused by the brutal attack on our economy, our currency and the criminal and financial economic blockade” .

Measure “necessary” but not miraculous

The government regularly invokes the international sanctions that have been imposed since 2019, especially by the USA, to oust President Maduro from power, even if the crisis has lasted for more than 8 years.

“That was an expected decision. It was necessary, ”economist César Aristimuño told AFP.

“Business accounting and bookkeeping processes were almost impossible with so many zeros,” he says.

Long before the measure was taken, the street partially “picked up” the new zero suppression, as prices were often advertised or written in thousands and not in millions for practical reasons.

If the measure is “practical” […], we cannot expect economic miracles because “this operation” is taking place without any fundamental economic measures “that could contain inflation,” Aristimuño estimates.

“No more zeros, fewer zeros, it’s all the same,” sighs Marisela Lopez, 34, a vegetable seller at the city market in Catia, a popular district in the west of Caracas.

“We pulled new tickets and even more tickets. Now we see them on the floor, we burn them, we don’t know what to do with them! She said about the old tickets.

While digital exchanges (cards or transfers) took precedence over cash payments, she points out that now everyone is “trying to get rid of their tickets. So are we, because if we end up with a lot of tickets … what do we do with them next? We do not know. “

Venezuela, which was once a major player in the world oil market, produced up to 3.3 million barrels a day and today it hit just over 500,000 bpd.

Foreign Minister Jorge Arreaza admitted in April that the use of the dollar, the currency of Venezuela’s main adversary, was “very paradoxical,” while the national authorities had long tried to prevent its circulation.

The authorities, hoping to return to an economy with the bolivar in the long run, are making the use of the dollar “temporary”.

Against mask requirement | The Texas governor tested positive for COVID-19