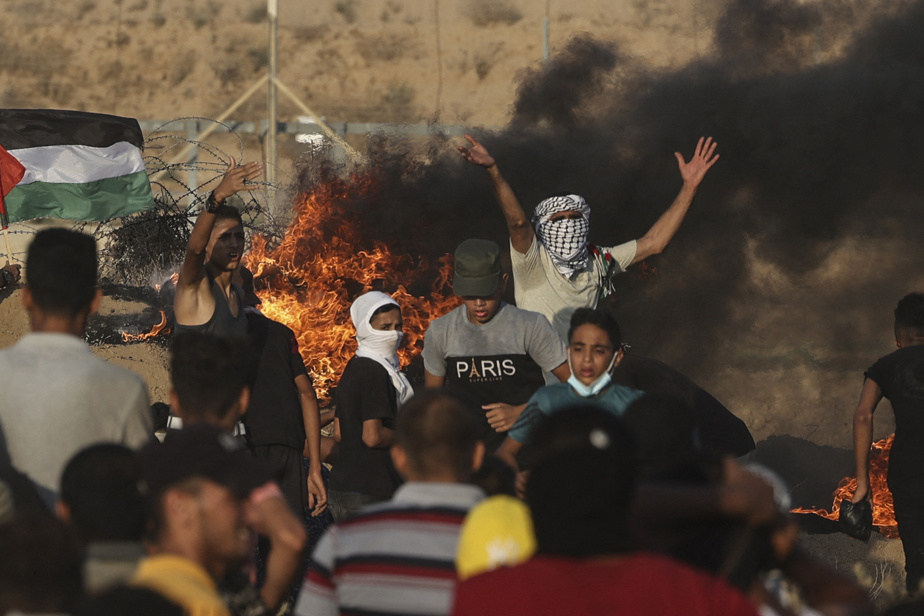 (Khan Younès) About 20 Palestinians were injured on Wednesday in clashes with the Israeli army on the sidelines of a demonstration near the border fence that separates the Gaza Strip and the Hebrew state, according to rescuers.

This morning a Palestinian died from injuries sustained five days earlier in similar clashes along the fence, which was heavily guarded by the Israeli army.

“About 20 Palestinians were injured, some with live ammunition,” Palestinian rescuers said. “You were taken to a field hospital west of Khan Younes” in the southern Gaza Strip.

At the request of several factions in the Palestinian enclave, including the Islamist Hamas in power, around 3,000 demonstrators gathered again on Wednesday afternoon to protest in particular against the blockade of the Gaza Strip imposed by Israel for almost 15 years.

Many Palestinian police officers present tried to prevent them from approaching the cordon, AFP journalists noted.

But some who managed to advance threw stones at the Israeli security forces positioned on the other side.

According to an AFP team on site, the army fired rubber bullets, live ammunition and tear gas grenades.

According to the authorities in the Gaza Strip, around 40 people were injured by Israeli fire on Saturday, including Ossama Khaled Daiah, 32, who died on Wednesday. A crowd gathered in the afternoon at the Jabalia refugee camp (north), where he was from, to attend the funeral.

A member of the Israeli security forces who was hit by gunfire from Gaza in the clash on Saturday is still in critical condition.

“We will not allow these violent clashes to start again,” said Amnon Shefler, the army spokesman, who had sent reinforcements along the cordon in anticipation of the new rally.

For more than a year, starting in March 2018, weekly rallies were held near the border fence to call for an end to the blockade and the “right of return” of the Palestinians who were forced into exile during the founding of Israel in 1948. About 350 Palestinians had been shot dead by Israeli soldiers at the time.

After the clashes on Saturday, the Jewish state carried out air strikes against Hamas’ “four weapons and storage facilities”.

Other non-casualty strikes took place Monday through Tuesday night in retaliation for the launch of incendiary balloons that caused bushfires on the Israeli side.

Israel and the Islamist Hamas waged an 11-day blitzkrieg in May in which, according to local authorities, 260 Palestinians, including fighters, were killed in Israeli attacks.

In Israel, rocket fire from Gaza killed 13 people, including one soldier, according to police and military figures.