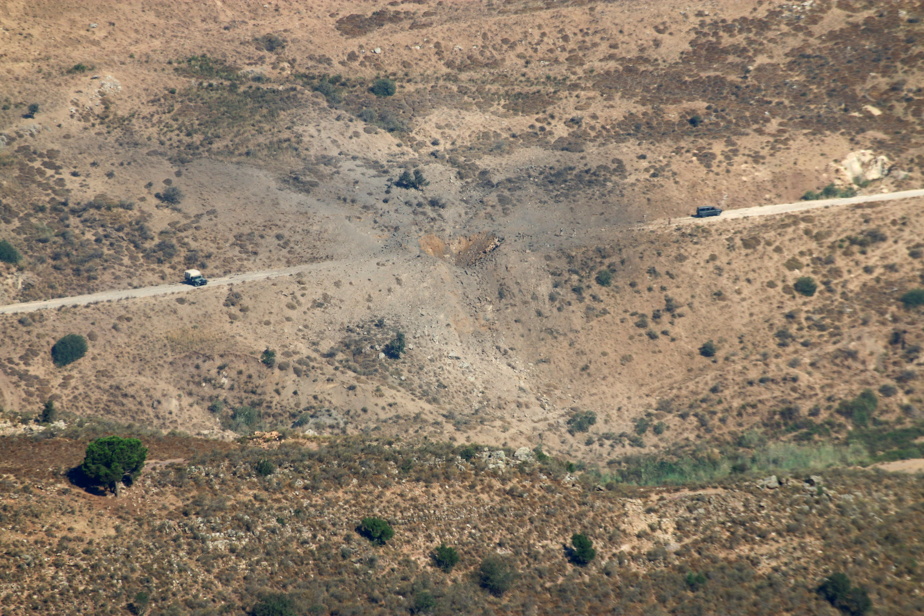 (Jerusalem) The Israeli Air Force committed itself on Thursday to its first air strikes in Lebanon in years.

“Army fighter jets attacked launch sites and terrorist infrastructures in Lebanon, from which rockets were fired,” the army said in a statement.

The statement does not state whether these are positions of Hezbollah, a very influential pro-Iranian Lebanese movement in southern Lebanon, or other armed groups.

The Israeli Air Force regularly bombs suspected Palestinian Hamas positions in the Gaza Strip and also carries out attacks in neighboring Syria, where it attacks positions of pro-Iranian forces.

However, the last known air strikes in Lebanon were from 2014, the Israeli army confirmed to AFP and came after an exchange of fire at the border.

According to the Lebanese Hezbollah’s Al-Manar Canal, at around 12.40 p.m. (2.40 p.m. GMT, Wednesday), two raids took place in the Mahmoudiya sector, about ten kilometers from the border between the two countries.

The Lebanese daily Al-Akhbar, pro-Hezbollah, accused Israel of having crossed “a red line” with these attacks, which represented a “dangerous development”. According to the daily newspaper, they touched an uninhabited area.

This is “the first deployment of its Israeli Air Force to attack Lebanese villages since 2006,” Lebanese President Michel Aoun said in a statement on Thursday. This suggests an intention to step up attacks against Lebanon, he said.

The last Israeli air strikes on Lebanese territory took place near the border with Syria in 2014. However, they have not attacked any Hezbollah strongholds in southern Lebanon since the conflict between the Jewish state and the pro-Iranian movement in 2006.

On Wednesday, three rockets were fired from southern Lebanon into northern Israel: two of them landed on Israeli territory and the third did not cross the border. The shots were not claimed.

No injuries were reported, but four people in shock were cared for by Magen David Adom, the Israeli equivalent of the Red Cross.

Shortly after the fire, the Israeli army launched three rounds of artillery attacks on Lebanon.

Israel’s Defense Minister Benny Gantz called on Wednesday for a “strong message” to be sent to UNIFIL, the United Nations interim force in Lebanon based in the south of the country.

UNIFIL, which has been present in Lebanon since 1978, has been monitoring the Israeli border since 2006 in coordination with the Lebanese army and monitoring the application of Resolution 1701 of the UN Security Council, which was passed after the war between Israel and Hezbollah.

On Thursday, the UN Mission Commander General Stefano Del Col held a tripartite meeting with the military from both countries at the UNIFIL premises in Naqoura, southern Lebanon.

“In this time of regional instability, the coordination and liaison role of UNIFIL must be respected more than ever by all parties,” he said in a statement.

Washington, for its part, condemned the shooting at Israel. “We condemn the rocket attacks by armed groups based in Lebanon against Israel. We have argued that Israel has the right to defend itself, ”said US diplomacy spokesman Ned Price.

“We will continue to monitor the situation,” he added, emphasizing the US government’s commitment to Israeli and Lebanese officials to “defuse the situation.” ”

The exchange of fire on the Lebanese-Israeli border coincides with rising tensions between the Hebrew state and Iran following a fatal attack on an Israeli billionaire company oil tanker at sea.

Israel, like the United States and the United Kingdom, were quick to accuse Iran of being behind the attack that killed two people and was not alleged.

Israeli Prime Minister Naftali Bennett claimed to have “evidence” of Iranian involvement and promised a response.

Discovery of 3 new dinosaurs in China