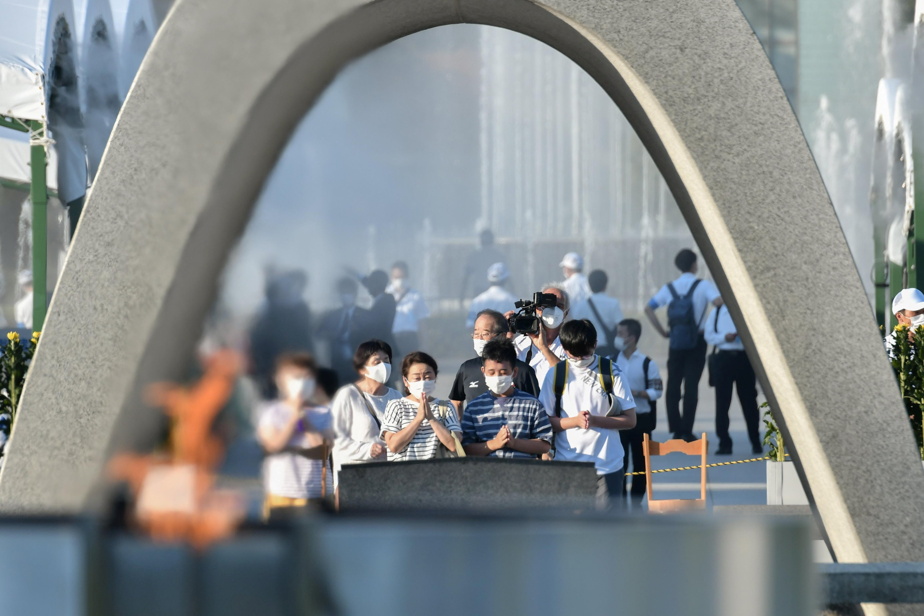 (Hiroshima) Japan commemorated the atomic bombing of August 6, 1945 in Hiroshima on Friday with this year’s controversy over the refusal of the International Olympic Committee (IOC) to demand a minute’s silence at the current Olympic Games in Tokyo.

Survivors, relatives and only a handful of foreign dignitaries attended the morning ceremony in Hiroshima, West, to honor the victims and call for world peace.

The Japanese Prime Minister Yoshihide Suga laid a wreath in front of the memorial.

Due to the pandemic, the public was excluded from the ceremony, as in 2020, but was able to follow it on the Internet.

Participants, masked and often dressed in black, observed a minute’s silence at 8:15 a.m. when the US atomic bomb had been dropped on the city 76 years earlier.

This tragedy “taught humanity that there is no point in threatening others in self-defense,” said Hiroshima Mayor Kazumi Matsui in a speech.

Survivors and the community recently proposed to the IOC that Olympic athletes be invited to this minute’s silence from Tokyo.

However, IOC President Thomas Bach did not follow the suggestion, responding in a letter that the closing ceremony of the Olympic Games on Sunday would provide an opportunity to pay tribute to all victims of tragic events in world history.

“It is disappointing, although we appreciate the fact that President Bach visited Hiroshima before the Games,” city official Tomohiro Higaki told AFP.

Mr. Bach traveled to Hiroshima on July 16 to mark the beginning of the traditional “Olympic Armistice”. He then said that the Tokyo Olympics were a “beacon” for a better and more peaceful future.

However, his visit met with criticism in Japan. An Internet petition that garnered more than 70,000 signatures criticized him in particular for using Hiroshima to “promote” the Tokyo Olympics, while Japanese public opinion was largely against it because of the health crisis this summer .

Yoko Sado, a 43-year-old Hiroshima resident who was strolling through the Hiroshima Peace Memorial Park on Friday, complained that the health crisis has robbed her city of the opportunity to spread a message of peace more widely.

“Without the pandemic, many people who would have participated in the Tokyo Olympics would have been able to visit this park and see the exhibitions,” regretted the mother.

This year’s ceremony in Hiroshima is the first since the International Atomic Weapons Treaty (TIAN) came into force last January.

However, this treaty was not signed by the nine states that have nuclear weapons (USA, Russia, China, France, Great Britain, India, Pakistan, Israel and North Korea).

The TIAN was also not signed by Tokyo, an unwavering ally of Washington and closely dependent on American military power for its regional defense.

“It is appropriate for Japan to pursue a realistic path to nuclear disarmament while realistically responding to threats to its security and maintaining and increasing deterrence,” Japanese Prime Minister Yoshihide Suga told reporters on Friday.

After Covid-19, Moderna will test an HIV vaccine – archyde