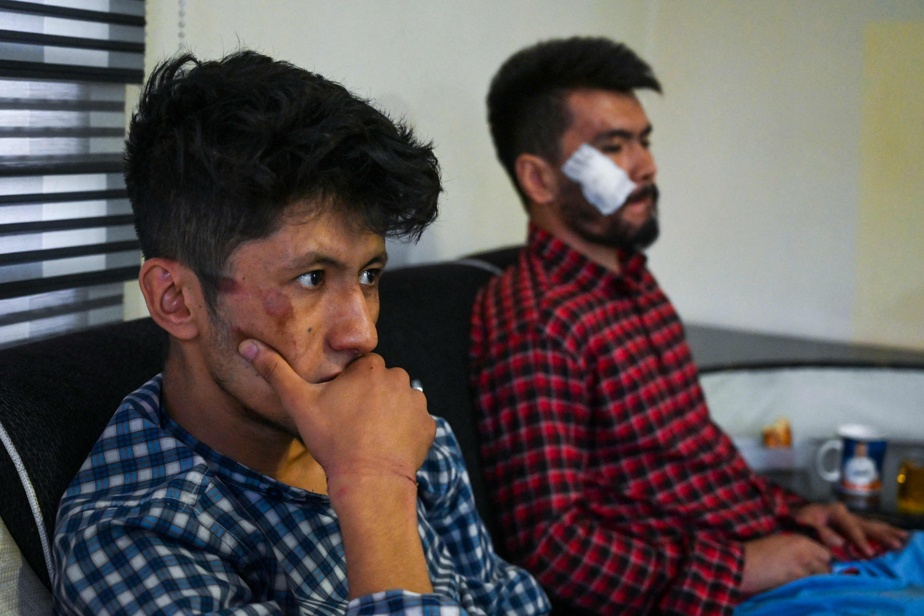 (Kabul) On Wednesday Taqi and Nematullah came to Kabul to cover a protest for their newspaper. This did not please the Taliban, who increasingly attacked the press and beat them until they could no longer stand up.

Under the pale light of the huge office, the two young Afghans, tall, thin and thick black hair, limp and contorted with pain, pull their faces as they undress.

They drop their shirts first, drenched in sweat. Then drop your pants.

Night has fallen and a stunned murmur goes through the editorial office. Their bodies, martyred, are littered with purple bruises, so large that they cover the entire lower back of one, one shoulder of the other, the thighs of both.

Journalists from Etilaat Roz (“Info Day”), one of the main Afghan daily newspapers, Taqi Daryabi, a 22-year-old photographer, and Nematullah Naqdi, a 28-year-old cameraman, were there in the middle of the morning to follow a demonstration in front of the 3. District in Kabul.

Taliban fighters, who have criss-crossed the city since the fundamentalists suddenly took power in mid-August, stormed on Nematullah as he began filming. “They told me it was strictly forbidden to film. They arrested everyone who was filming and taking their phones, ”he told AFP.

The demonstration had only just started. Only a few dozen women had come to defend their right to work and study, one of the leitmotifs of the anti-Taliban rallies that have spread in several major Afghan cities in recent days.

The Taliban try to take Nematullah’s camera with them, he escapes them and discreetly gives it to a demonstrator. However, the Taliban who followed him intercepted him and forcibly took him to the police station.

Inside, “the Taliban started insulting me, kicking me,” he continues. They lead him into an empty room and beat him “at four or five”. “They tied my hands behind my back, knocked me down, and hit me with sticks, cables, pipes, whatever they could find.”

“I screamed, I always said I was a journalist. But they didn’t care. They kicked my head, plowed me in the back … It took 10 to 15 minutes. I thought they were going to kill me ”. The Taliban restart several times.

Nematullah is finally brought to a cell in which 15 people are piled up. There he finds Taqi, arrested and beaten in the same way, shocked, his head is bleeding. “We were lying on the ground, we were in so much pain that we couldn’t move,” he recalls.

About four hours later, in the early afternoon, the Taliban liberated them, returned their phones, and threw them out with a final series of insults.

Their attackers made no secret of their hatred of journalists. “For them we are enemies,” says Taqi. And Nematullah says: “After they hit us, they said to us, ‘Do you understand what happens when you are filming? “”. When Taqi asks why he hit him, a Taliban replies: “You’re lucky you weren’t beheaded!” “.

When asked about this affair by AFP, the Taliban government did not comment.

On Wednesday evening, he raised his voice by announcing the ban on demonstrations “until further notice” after urging the media to stop reporting.

But others are planned, a test for the new regime, which is also committed to the international community to respect freedom of expression.

Dozens of journalists have been beaten, arrested or prevented from covering the protests in recent days. Mostly Afghans, who, according to numerous reports, are harassed or beaten up by the Taliban more than the foreign media.

The “official speech has nothing to do with the reality that we are observing on the ground,” notes Etilaat Roz boss Zaki Daryabi, and calls on all media to join forces to denounce the violence against his two journalists and others.

Can the Taliban change? Taqi leans forward with a grimace and shows his lower back, which is nothing more than a huge bruise: “If you want the answer, just look”.