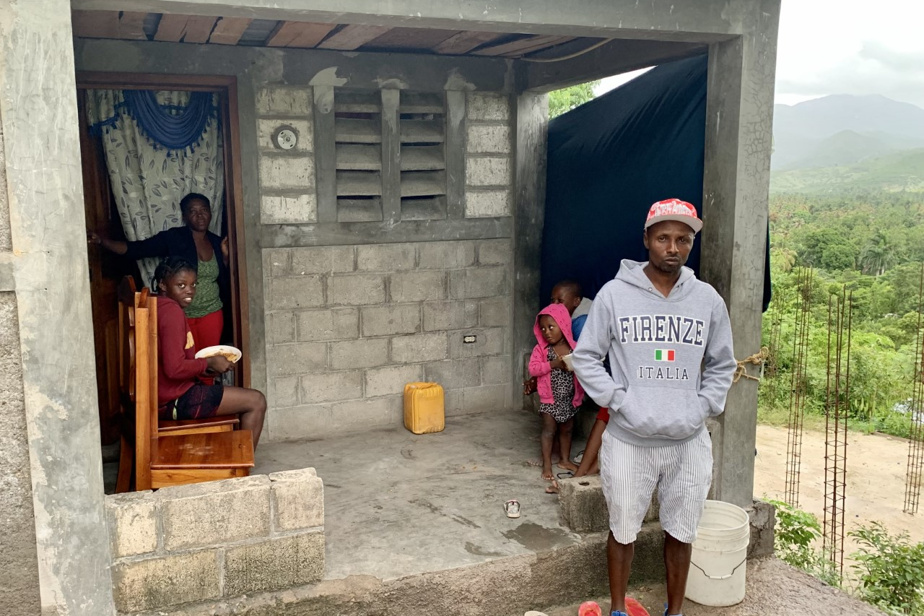 (Cavaillon) You still stand erect while the destruction goes as far as the eye can see. A small group of houses built to withstand natural disasters with the help of a Canadian organization just passed the test of the Haiti earthquake on Saturday. For some disaster victims anxious to be rebuilt, this could be a lifeline.

“If I had been in my old house, I would not be sure whether I would still be alive,” says Marc-Yves Milien and explains how violently the earth shook on Saturday.

The traveling pharmaceutical salesman once lived in a rickety shack that was destroyed by Hurricane Matthew in 2016. He then lived with his children in makeshift corrugated iron accommodation for two years.

A house by Développement et Paix in Cavaillon

Then people offered to help him rebuild.

A Haitian organization, the Institute of Technology and Animation (ITECA), supported by Development and Peace, a Catholic NGO based in Montreal, carried out a special project in the region. 25 families were supported in building new types of houses under the supervision of an engineer.

A humble, tiny, and simple home by Canadian standards, but withstanding earthquakes, storms, and hurricanes.

Marc-Yves Milien now lives with his family of eight in Cavaillon in the small building made of cement blocks that are stacked on a solid foundation. He lays his hand on the wall: Everything held up during the 7.2 magnitude earthquake that just devastated the region.

“The lifestyle is very different,” he says of his new home.

“Despite certain weaknesses, it is a good, durable construction,” he says.

A destroyed church in Les Chardonnières, in the west of the country

Cavaillon is a rural town about twenty kilometers from the town of Les Cayes in southern Haiti and is best known for being the birthplace of the poet and writer Rodney Saint-Éloi, a companion of the Order of the Arts and Letters from Quebec. Coffee used to be grown here, but this industry has long since died out here. The farmers raise a few animals, grow corn, potatoes and peas to feed their families and earn money in the market.

The city was badly hit by the recent 7.2 magnitude earthquake. Everywhere you see houses that have been razed to the ground and turned to rubble. Others are so crazy that no one dares to return. The Catholic Church, the most imposing building in the parish, is reduced to almost nothing. Families hike, settle outside to sleep, cook, and meet their personal needs.

The Mayor, Jean-Marie Naissant, struggled during the passage of La Presse to protect his citizens who were exposed to the elements. “We need tarpaulins, tents, food and water,” he hammered.

But almost all of the 25 houses that were built in Cavaillon in collaboration with Development and Peace held up.

“We didn’t have any houses demolished. We have two or three who took damage, but the structure resisted, it didn’t fall. This is a very good result for us. It really is an important opportunity to test the quality and durability of houses, ”said Elifaite St-Pierre, manager of ITECA, local partner of the Canadian organization.

Incidentally, he points out that another NGO has built 12 houses in the region in recent years and all of them collapsed.

A building destroyed by the earthquake in Les Cayes, 20 km from Cavaillon. removed

Development and Peace has allocated US $ 1.8 million to help build the 25 homes after Hurricane Matthew. Global Affairs Canada had already funded the construction of similar structures developed by ITECA in other regions of Haiti.

Families had to raise some of the labor to build it and pay for the materials out of pocket, which was about $ 2,650, or 30% of the estimated $ 9,000 total cost of a house. Many went into debt to pay the bill and have not yet paid off their loans.

The work was difficult, there were threats, attempts at corruption, the materials were diverted. Several beneficiary farmers live on secluded properties on top of the mountains, accessible via steep, winding paths full of holes.

The modest residences have two bedrooms, a common room and a veranda. Many have neither electricity nor running water, but they offer a safe haven in the event of a natural disaster, which is progress.

After the earthquake on Saturday, Jean-Meyer Exantus, father of four children, had doubts. Perhaps the structure was weakened and the house could collapse in an aftershock? His worry was short-lived.

“We slept outside after the earthquake, but the whole family has been back since Monday,” says the farmer.

David Fleurant, a 37-year-old baker who also benefited from the program, saw his bread oven completely destroyed on Saturday. He also feared for the house where his three children, his wife and his two parents live. “There was a lot of vibration, block dust was falling from above,” he says.

The construction does not seem to have suffered any damage, apart from a small extension that he built himself without the advice of the engineer and whose wall now wobbles at the slightest bump.

Still a lot to do

Elifaite St-Pierre is particularly pleased that people in remote, inaccessible areas have benefited from these structures.

“Many NGOs prefer to work near major cities during disasters, where there is more visibility. The needs are great in remote and marginalized areas, ”he says.

It is not yet possible to say whether the program will be extended. There is still a lot to do in the affected regions before the reconstruction begins.

On Wednesday, civil defense announced that disaster victims would only settle on the grounds of houses or in the vicinity in tents, tarpaulins and temporary accommodation if there was a lack of space. There was no mention of the establishment of large camps for displaced persons, as at the time of the 2010 earthquake. The camps were the scene of rape and violence and, in addition to sanitary facilities, also presented a challenge.

The civil defense announced that victims of disasters would only settle on the premises of houses or in the vicinity if there was a lack of space under tents, tarpaulins and emergency shelters.

“The solutions taken must not create new risks or exacerbate the insecurity of the affected population,” emphasized the authorities and recalled that the establishment of huge camps had proven to be “difficult to accomplish, especially in the Haitian context”.

Workers have to get vaccinated and sue a hospital