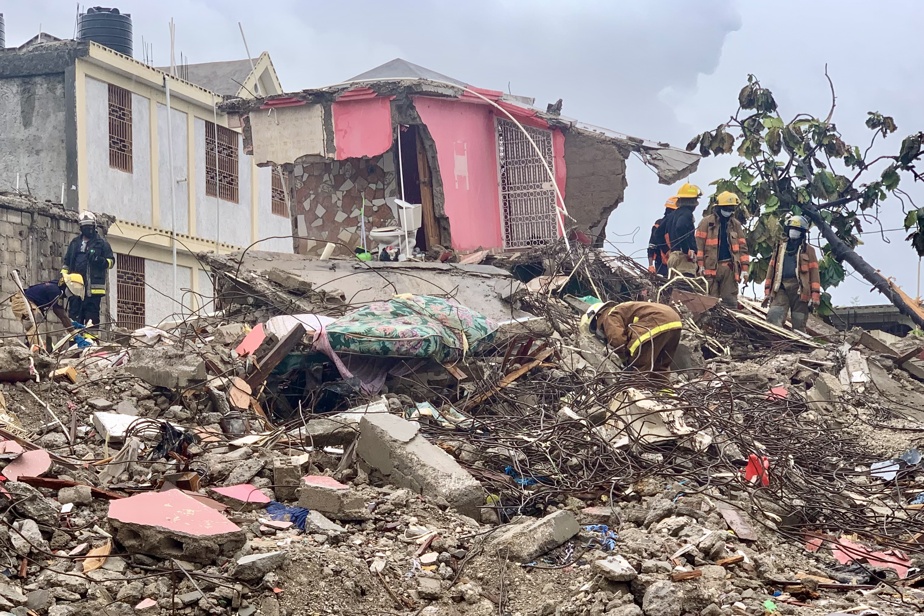 (Les Cayes) Three days after the earthquake that devastated the Cayes region in Haiti, rescuers are still clinging to hope of lifting survivors from the rubble. It caused a stir on Tuesday when residents claimed that a person buried under the rubble of a four-story building had given signs of life. As if by a miracle, in the 72nd hour after the tragedy.

Many people had already been pulled from the rubble of this large family residential complex in the Brefet district. The living and many dead. On Tuesday morning, the remains of a little girl covered with a white sheet were again on the floor, waiting to be taken to the morgue.

The search at this location had ceased on Monday, which angered the neighborhood as they believed there were survivors and bodies left. “They stopped working after two days, everyone is unhappy,” said Guilo Michel, a local resident, with his arms crossed in front of the building, at the beginning of the day.

A civil defense officer, Gutenberg Destin, had tried to justify stopping the search. The number of rescuers is limited and the need across the region is enormous.

“People are attached to loved ones, but we couldn’t stay there forever! We only took out corpses at the end. We can be more useful elsewhere, we have to set priorities, ”he said.

Suddenly, neighbors announced that a person trapped under the rubble had sent a message to confirm they were still alive. A battalion of soldiers, firefighters, emergency services from civil protection and heavy machinery operators returned to the scene immediately.

Everyone went back to work.

“We’re not looking for the dead, we hope everyone is alive,” said Adler Lubin, head of the Ministry of Public Works, as the crowd crowded fearfully.

Adler Lubin, an official with the Ministry of Public Works

Giant soldiers and firefighters attacked the concrete with their sledgehammers, knocking hundreds of times to shatter the huge blocks that were piled up. Every now and then a firefighter called for silence, then listened with a stethoscope and looked for signals in the rubble. The crowd held their breath each time.

Despite all these efforts, no one was left alive from the apartment complex on Tuesday. Was the message the neighbors were talking about really real? It doesn’t matter, says Serge Chéry, one of the coordinators of the relief operations. “We’ll move on,” he said.

The new, still “very partial” assessment by the Haitian authorities reports at least 1941 deaths and several dozen affected families, especially in the south of the country after the 7.2 earthquake that struck on Saturday.

Many homes are too damaged for people to return safely. Housing and feeding the victims will not be easy. Tropical Depression Grace, which brought heavy rainfall to the region overnight from Monday to Tuesday, has already hit those forced to sleep outside or in makeshift shelters.

“Everyone asked: Where can we find a tarpaulin for protection? The main concern is to protect yourself, it’s an emergency, ”explains Guypsy Michel, director of the Haitian branch of the Center for International Studies and Cooperation (CECI), an international cooperation organization in Quebec that was involved in the assessment.

Some communities, whose drinking water supply is dependent on rainwater harvesting, are also struggling with a serious crisis because their cisterns cracked during the earthquake.

We have already sent some water, but trucks will deliver from tomorrow [les] Communities in [besoin d’]Drinking water.

Guypsy Michel, director of the Haitian branch of the Center for International Studies and Cooperation

The Haitian government on Tuesday praised the “upswing in solidarity and mutual aid” that has gripped the country since Saturday, but also warned in an official message on social networks.

“The work remains enormous,” he emphasized.

Only half as many European students at UK universities |