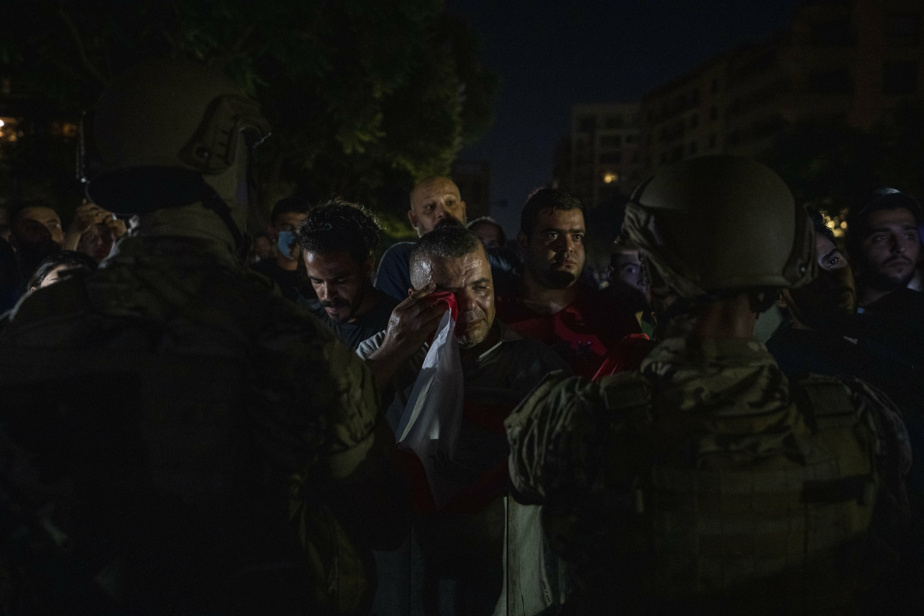 (Beirut) Amid an economic collapse, Lebanon witnessed state mourning on Monday following the death of 28 people who were burned alive in a gasoline tank explosion while desperately searching for fuel.

The tragedy that struck the Akkar region of northern Lebanon on Saturday night shows the extent of economic collapse in a country where daily life is overshadowed by a multitude of shortages, gasoline, electricity and even bread.

The drama also highlights the failures of a political class being blown up for its corruption and incompetence, accused of being cut off from reality and unable to initiate reforms to contain the crisis. And this despite repeated orders from the international community and the threat of sanctions by France and the European Union.

The explosion in Akkar, one of the poorest regions in the country, left 28 dead and nearly 80 injured and put pressure on an already breathless hospital sector that had neither drugs nor electricity.

Health care workers care for a severely burned man after a gas tank exploded on Sunday.

While DNA testing is in progress, the death toll could be revised upwards as teams have to deal with body bags containing multiple body parts, a health department official told AFP on Monday.

In a hospital in Tripoli, a large and poor metropolis in the north, 23-year-old Iqaz Sakr cries while she describes the burns of her husband Adnan (30) and her brother Abdel Rahmane (20) seriously injured.

“We hope they will be sent abroad for treatment,” she says. “My brother wanted gasoline to get feed for his sheep. My husband needed it to (work) and support me and my daughter.

On Sunday, AFP correspondents saw the remains wrapped in white shrouds in several hospitals, while families’ howls of pain echoed in the corridors.

Injured people were also evacuated to hospitals in Turkey and Kuwait.

The World Health Organization (WHO) has announced that it will be sending medicines and medical supplies for the treatment of up to 3,000 patients, but also 250 patients with burns, in the coming hours.

Sunday’s tragedy revived that of the port of Beirut. On August 4, 2020, the explosion of several tons of ammonium nitrate left more than 200 dead and devastated part of the capital.

An investigation has been opened in Akkar to determine the circumstances of the explosion in relation to fuel shortages.

The petrol tank, presumably stored by its owner for speculative purposes, had been “confiscated” by the army in order to distribute the petrol to the citizens.

The explosion occurred, according to the National Information Agency (ANI), after fights between residents who wanted gasoline.

Smoke rises from the house where a gas tank exploded on Sunday. The petrol tank, presumably stored by its owner for speculative purposes, had been “confiscated” by the army in order to distribute the petrol to the citizens.

“One massacre occurred due to an economic crisis caused by years of corruption in the country,” summarizes Sahar Mandour, researcher at Amnesty International.

“It’s murderous corruption that can be seen with the naked eye,” she grumbled.

According to the World Bank, Lebanon has been going through one of the worst economic crises in the world since the middle of the 19th century since autumn 2019. Given the rampant inflation and massive layoffs, 78% of the Lebanese population now live below the poverty line, according to the UN.

Due to a lack of foreign exchange, the central bank recently announced that it would no longer finance fuel subsidies. Gas stations then closed because of higher prices and the army launched inspections to force them to reopen.

On Monday, the army announced that it had confiscated hundreds of tons and liters of heating oil across the country to ensure the fuel would be redistributed to neighborhood generators, hospitals and bakeries.

The power plants no longer function without fuel and the electricity goes out until 10 p.m. every day. The houses remain in the dark for hours, because the circular generators also ration the households due to a lack of fuel.

The formation of the new government, which is theoretically crucial for initiating reforms, is stalling. Prime Minister-designate Najib Mikati met with President Michel Aoun on Monday, but further talks are expected this week.

In an endless line in front of a gas station in Beirut, Mohamed sees no light at the end of the tunnel.

“We have to leave Lebanon,” he told AFP on Monday. “I’ve already started the preparations. May God help those who will stay, ”says this engineer in his thirties, father of two.

Her family pays colossal sums to run the generator that powers her grandmother’s oxygen concentrator to keep her “from dying”.