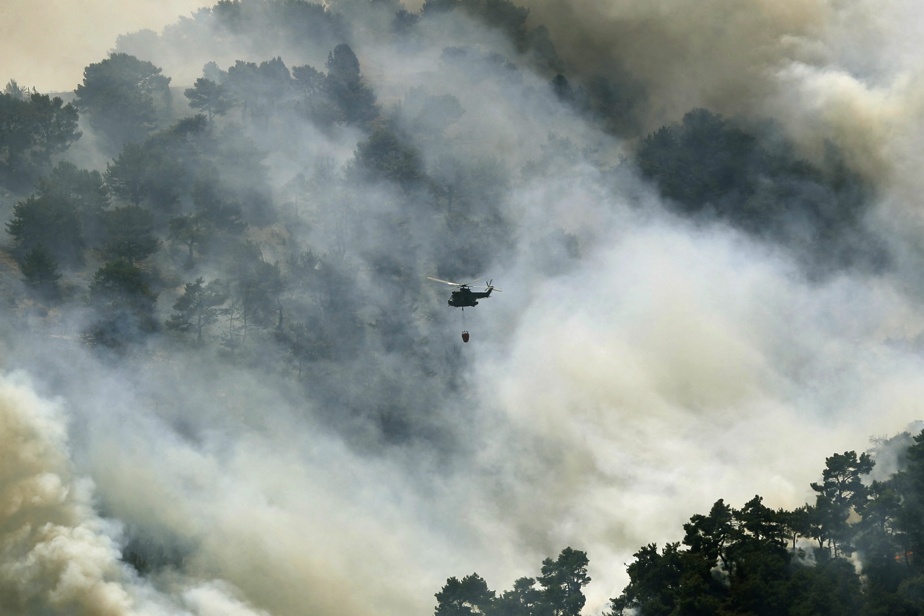 (Beirut) Army helicopters and civil defense rescuers in Lebanon are fighting gigantic fires on Friday for the third day in a row, devastating pine forests in northern Lebanon and threatening populated areas.

The fire that broke out in the Akkar region on Wednesday afternoon is “spreading rapidly over large areas,” said Agriculture Minister Abbas Mortada on Friday.

“The fire is spreading in all directions,” said the minister because of strong winds and even reached neighboring Syria.

According to the National Information Agency (ANI), the army deployed two helicopters at dawn on Friday to contain the flames. In the Jabal Akroum region, residents were forced to leave their homes overnight.

On Thursday, an AFP videographer filmed the flames that engulfed the trees on the forested side of the mountain in Qoubayat amid billowing white smoke as helicopters unleashed rainstorms on the forests.

On the ground, volunteers unrolled long pipes from civil defense trucks and, despite the lack of protective equipment, got as close as possible to the flames; some were suffocated in smoke.

Lebanese civil protection director George Abou Moussa assured on Friday that his teams have been mobilized. “But there are areas that we don’t have access to,” he said.

According to Abbas Mortada, the Lebanese state hopes to be able to send water bombers from abroad, especially from Greece and Cyprus, if it is short on cash.

On Wednesday, a 15-year-old volunteer was killed while campaigning for the fire.

In October 2019, Lebanon experienced forest fires south of the capital, which the authorities found difficult to contain. Proof of the negligence of the authorities was appreciated by the Lebanese, who regularly cited this example in the popular protest movement in autumn 2019.

In neighboring Syria, the fire that had spread from Lebanese territory to the Quousseir region has been “completely extinguished,” according to the Syrian press agency, which quoted the local authorities as saying.

EU adds rare disease as a side effect