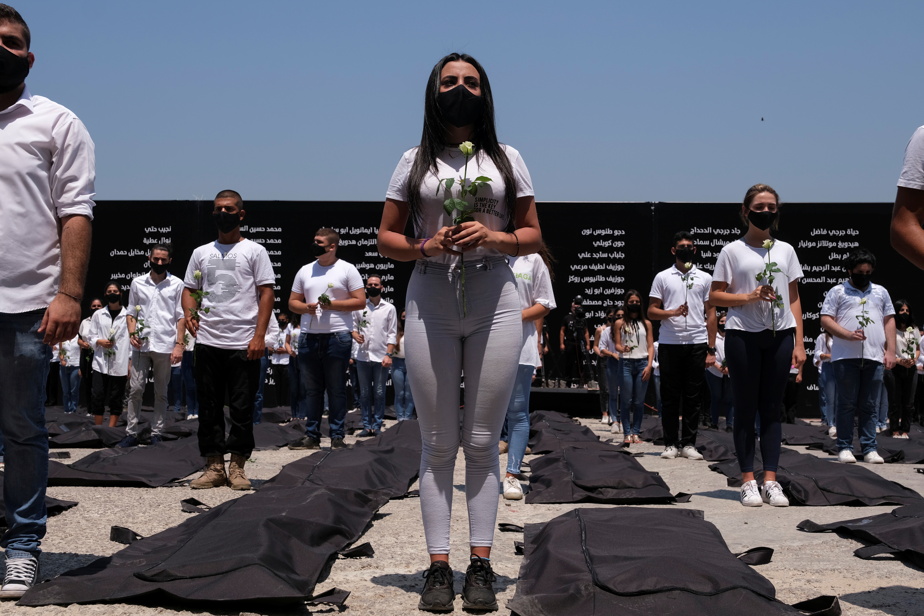 (Beirut) In pain and anger, the Lebanese flocked to central Beirut on Wednesday to celebrate the first anniversary of the devastating and deadly explosion in the port and to castigate the impunity of the political class in this tragedy.

“Individual bankruptcies”, “historical and moral guilt”. With the opening of a new international aid conference for the Lebanese, French President Emmanuel returned to charges against Lebanese leaders who were accused of blocking the formation of a government and the investigation into the tragedy. He also pledged 100 million euros to provide direct aid to the population.

On August 4, 2020, shortly after 6 p.m. local time, the Lebanese capital was in horror: Hundreds of tons of ammonium nitrate had been stored for years in a dilapidated warehouse and exploded “without precautionary measures” by the licensing government itself.

The catastrophe of too many in a country in the worst socio-economic crisis in its history, led by a political class that is sinking it.

In order to demand justice, the families of the victims and activists organize marches, vigils and religious ceremonies opposite the port or near the parliament.

With national flag in hand, Lebanese people poured in small groups towards the city center or near the port, and the army and police erected roadblocks to close the area’s main roads to traffic, an AFP correspondent reported.

In the fire station in the Karantina district near the port sat relatives of the victims, some women dressed in black, holding up portraits of dead relatives. Others had white flowers in their hands.

As early as Monday, families of the victims threatened to “break the bones” of anyone who defied their anger on the street.

These victims included firefighters, dock workers, motorists or local residents when the windowpanes splintered and the furniture rolled.

Jeffry Chartouni, 32, who works in the port’s granaries, has lost seven colleagues.

He doesn’t understand how they were never warned of the danger for years. “I could call the young people to tell them to flee […] Security officers, ministers, government, customs, of course they knew. They all need to be held accountable. ”

Despite the scale of the tragedy, which shocked the whole world, the local investigation did not produce any concrete results and no culprit was brought to justice, even when ex-ministers were targeted by the judiciary.

And for a good reason? The ruling class. She is charged with doing everything possible to torpedo the investigation and avoid charges, on the grounds of alleged immunity.

Even if wounds healed a year later, neighborhoods were rebuilt thanks to NGOs and volunteers – the state did nothing or very little – the nation remains traumatized.

According to UNICEF, every third family has children who still show signs of “psychological distress”. In adults, it’s one of two.

“All of our wounds have been inflamed again,” said Mirvat Bakkour tearfully at a rally on Tuesday evening in the Gemmayze district near the port.

“I remember the fear I felt at the time of the explosion, the fear for my daughter. ”

“The illusion of living lost”

In a year, the investigation has not officially determined the causes of the explosion. The explosion occurred after a fire in the hangar, which, according to safety sources, was caused by welding work.

For Amnesty International, the authorities “have shamelessly obstructed the search for the truth”.

Pope Francis said he had prayed for Lebanon. “Many are the ones who have also lost the illusion of life,” he says.

The country is still waiting for a new government to initiate reforms demanded by the international community in exchange for much-needed aid following the resignation of Hassan Diab a few days after the explosion.

But practically unchanged since the civil war (1975-1990), the political class is accused of negligence, corruption and a complete lack of reality.

Even the threat of European sanctions does not seem to free him from his lethargy.

And as if this tragic situation wasn’t enough, rockets were fired from Lebanon at Israel, two neighboring countries that are technically at war, resulting in reprisals on Lebanese territory. Not a victim.