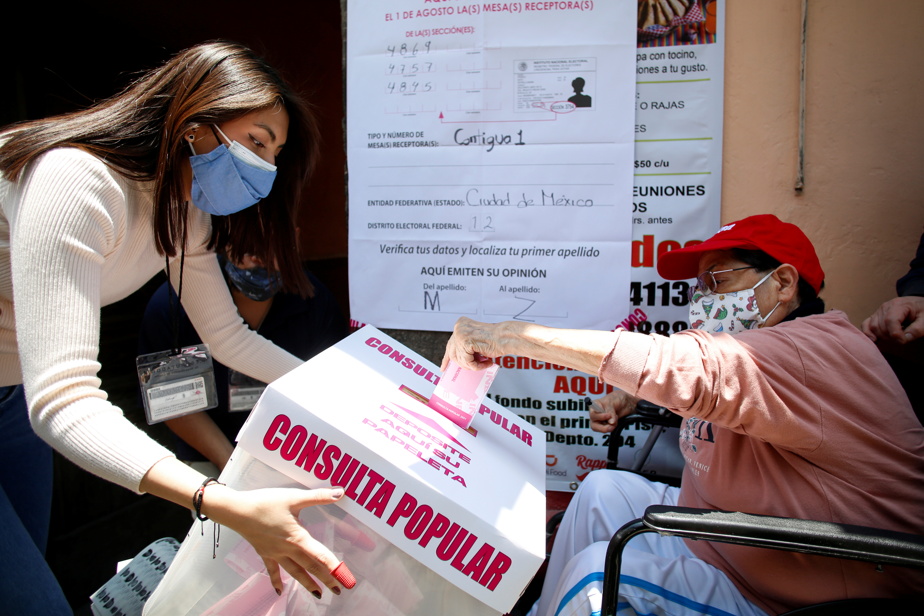 (Mexico) The Mexicans will vote on Sunday in a referendum requested by President Andres Manuel Lopez Obrador on whether his predecessors should be investigated and prosecuted for alleged corruption.

But his critics see it as a simple political coup.

The director of the National Electoral Institute (INE), Lorenzo Córdova, said voting had started quietly and only eight of the 57,000 polling stations had not opened due to the decision of the local authorities.

For the vote to be binding, 37.4 million people – or 40% of the electorate – have to attend, a difficult bet given the lack of enthusiasm this initiative arouses among Mexicans.

While the “YES” could win up to 90%, it seems difficult to get even a 30% turnout, believes Roy Campos, director of the Mitofsky polling institute.

Rosario Gomez is among those planning to vote in one of the polling institute’s 57,000 ballot boxes, against more than 160,000 for the June general election. “It’s time to pay for these thieves!” », Starts this 52-year-old employee who works in the stores.

Felipe Calderón is one of the former presidents affected by this referendum.

In Mexico, ex-presidents can be tried just like any other citizen, and critics consider the referendum unnecessary.

“Waiting for the results of a consultation is designed to turn the judiciary into a political circus,” said José Miguel Vivanco, regional director of Human Rights Watch, based in New York.

Although the vote is an idea of ​​the head of state, the country’s first left-wing president himself ruled out the vote because he does not want him to retaliate against “corrupt and hypocritical conservatism”.

The proposed referendum poll points to five of his predecessors, all right-wing members – Carlos Salinas, Ernesto Zedillo, Vicente Fox, Felipe Calderon and Enrique Pena Nieto – whose terms in office ran from 1988 to 2018.

But the Supreme Court changed it for an ambiguous alternative.

The question is as follows: “Do you agree or disagree that appropriate measures are taken, in accordance with the constitutional and legal framework, to establish a process of clarifying the political decisions of recent years by political actors with the aim of ensuring justice and the rights of potential victims? ”

However, Omar Garcia, a survivor of the disappearance and the alleged murder of 43 students in 2014, allegedly by corrupt police officers and drug traffickers, believes it is valid to listen to people, even if it is non-binding. “This referendum calls for an end to impunity,” he said.

The results are expected within two to three days after the polls are closed.