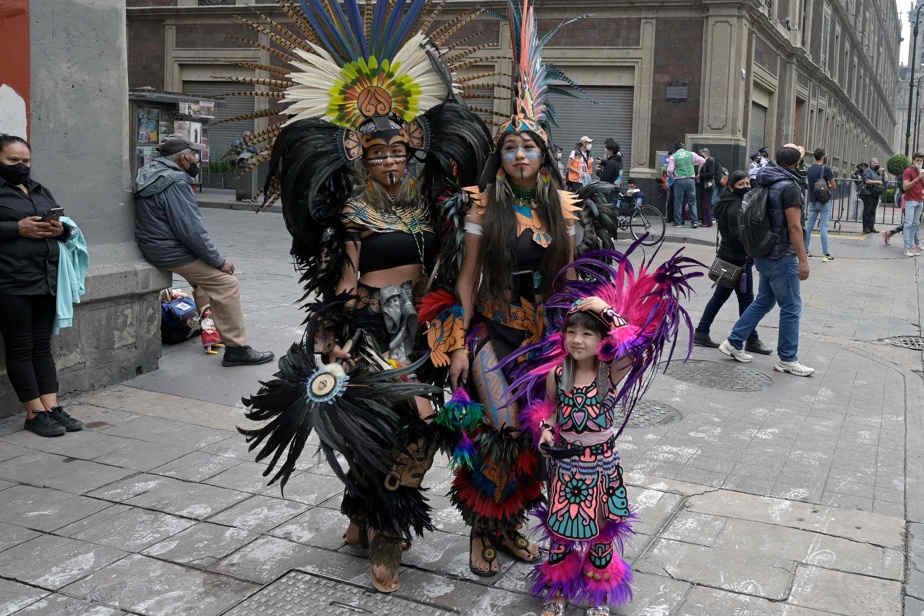 (México) As you stroll the streets in the heart of Mexico City, hear the urban backstory: the sound of cars, the screams of the scrap buyer, the bells of the garbage truck …

It is difficult to imagine that some of these streets follow the outline of what Tenochtitlan was five centuries ago, a swanky city built on an island where great civilization flourished.

The Aztec emperors, who ruled what would one day become Mexico, were defeated on August 13, 1521 when a Spanish-led force captured the city.

Despite what was lost 500 years ago – an empire and countless indigenous lives – there are still numerous traces of this civilization under the streets, in people’s hearts, and even on their plates.

Today, as then, the center of the city is devoted to trade, with traders displaying their goods on blankets or in makeshift kiosks, similar to what they would have done in 1521.

Artists, researchers and the government are trying to illustrate what it looked like and what is left of it: They want to draw a line through the streets of the metropolis of nine million to clarify the boundaries of the ancient city of Tenochtitlan. This boundary was erased long ago when the lakes that surrounded the city were drained.

This is all part of a project to restore the memory of a historical event that for too long has been mistakenly portrayed as the conquest of indigenous groups by the victorious Spaniards.

“What was the conquest really?” What have we been told? Who won and who lost? Asked the Guatemalan archaeologist Margarita Cossich, who works with a team from the National Autonomous University. It’s so much more complex than just talking about the bad guys and the good guys, the Spaniards versus the local groups. ”

Expedition leader Hernán Cortés and his 900 Spaniards, for example, made up only about 1% of an army of thousands of indigenous allies oppressed by the Aztecs.

But even the official plans only faintly reflect the reality of the time. The city’s border will be near a place where women sell corn tortillas, the ingredients of which have not changed since the Aztecs.

Others sell amaranth candies mixed with honey and nuts; In Aztec times, amaranth seeds were mixed with the blood of sacrificed warriors, shaped into gods and ritually eaten, explains the historian Hugo García Capistrán.

It didn’t all end on August 13, 1521, when the last leader of the Aztec resistance, Emperor Cuauhtemoc, was captured by the Spanish. The place where this happened is indicated by a simple plaque in the infamous Tepito neighborhood.

“Tequipeuhcan: The place where slavery began. The emperor Cuauhtemotzin was captured here on the afternoon of August 13, 1521, ”explains the memorial plaque on the wall of a church.

A few blocks away, Oswaldo González sells obsidian figures, a black stone reminiscent of glass that the Aztecs valued.

“Everything that the Spaniards could not see and destroy is still alive,” said González.

There are also traces of Cortés, although they are not very public or ostentatious; In school, Mexicans learned for decades to see him as an enemy. Instead, President Andrés Manuel López Obrador is promoting the indigenous version of the events and has asked Spain to apologize for the deaths, disease and exploitation that accompanied the conquest.

Spain did nothing and the Spanish ambassador was not invited to the 500th anniversary celebrations on Friday.

Archaeologist Esteban Mirón points out that there is not a single statue of Moctezuma – the emperor who greeted Cortés – in the city.

There are also no statues of Cortés. When Mr. Mirón traced the path of the Spaniards to the city in 1519 – first greeted, the conquistadors then expelled – we come across a stone tablet that commemorates the first meeting between Cortés and the Aztec emperor.

In a nearby church, another plaque indicates where the remains of Cortes are believed to be buried.

It is said that he wanted to be buried here, near the site of his greatest victory, made possible in particular by accomplishments such as building a fleet of wooden warships to attack a city surrounded by water.

Since Tenochtitlan was completely surrounded by a shallow lake that was crossed by several bridges, the Spaniards built ships that resembled floating combat platforms to face the Aztecs in their canoes.

Tenochtitlan also inflicted severe defeats on the Spaniards. When they entered the city in 1519, they were evicted a few months later at the cost of several human lives. They also had to give up most of the gold they captured.

On June 30, 1520 – an event that was first called the “sad night”, then renamed “Victory Night” – Cortés had to flee and left several Spanish dead. “The story goes that they fled on foot into the shallow lake, stepping over the bodies of their own comrades,” said Mirón.

The spirit of ancient Mexico is also alive.

A 41-year-old woman, Mary Gloria, is embroidering in a slum near the old town.

Ms. Gloria has just completed an embroidery of Mictlantecuhtli, the Aztec god of death, to highlight the impact of the coronavirus pandemic on the city.

Similar epidemics – smallpox, cysticercosis, then cholera – almost wiped out the town’s native population after the conquest. Survival, more than anything, was the greatest indigenous victory after 1521.

Ms. Gloria now wants to restore the image of Malinche, the native woman who served the Spaniards as an interpreter. For a long time, Malinche was considered a traitor and ensured the survival of her descendants.

“It’s up to us to rewrite the narrative,” said Gloria.