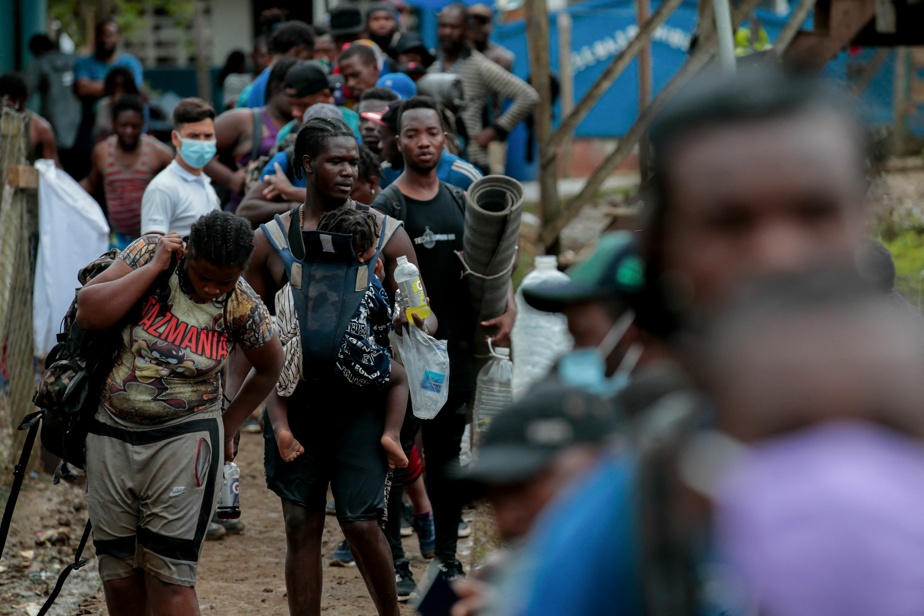 (Bajo Chiquito) When Moise Cliff Raymond arrives at the Tuquesa River covered in mud, he dips there to wash himself after hiking in the swampy jungle of the Darien for five days to cross the border between Colombia and Panama.

Like him, hundreds of migrants, many Haitians and Cubans, face the dangers of this dangerous expedition to the first village, Bajo Chiquito, guided by the hope of the American dream every day.

“The trip was very hard because it’s a long way. There are dead, many have not made it that far. In my opinion, it is belief in God that has helped us, ”this 29-year-old Haitian wearing a Jamaican Rasta hat told AFP.

For him, that’s just one step forward: “I’m going to the USA. That is my goal. There I can realize my dreams and find a good job, ”he hopes.

Other perhaps wealthier migrants with children in their arms arrive aboard canoes, such as Peter, 29, with his three-year-old daughter. “It is what it is. You have to do it if you want a new life. It is very difficult for us Haitians,” he explains.

On Sunday around 580 migrants managed to cross the “Darien Stopper”: 575,000 hectares of jungle between Colombia and Panama.

The Panamericana, which connects Alaska with Tierra del Fuego, suddenly stops on both sides of the border: The Darien Marshes block the isthmus for around 160 km between the Atlantic and Pacific coasts. Between Panama and Colombia there are around fifty kilometers of swampy jungle without any transport infrastructure: trucks and cars have to bypass it on board ferries.

According to UNICEF, crossing the Darien is one of the most dangerous journeys in the world.

But since the beginning of the year, according to the Panamanian Interior Minister Juan Pino, 64,000 migrants have crossed the border, 18,000 of them in August. The majority are Haitians, he confirms.

Faced with this incessant flow, the Panamanian and Colombian authorities have agreed to let half a thousand passengers pass each day for a year.

Bandits on the move

To get to Bajo Chiquito, an indigenous village of the Embera ethnic group, the first inhabited area to emerge from the swamps, migrants had to walk from sunrise to dusk for 12 hours a day.

All survivors of the jungle speak of attacks, assassinations, rape, committed by organized gangs.

“We saw five dead,” says Yadira Rosales, a Cuban woman who travels with her husband José Alberto Reyes and their five-year-old daughter Adelis.

“We ran into bandits, but we were in a group: they took our money and let us go,” she says.

In Bajo Chiquito, around 400 exhausted migrants are treated every day in a pharmacy run jointly by the Panamanian Ministry of Health and Doctors Without Borders (MSF).

“Most of them have foot injuries […], Gastrointestinal diseases, insect bites … and we also treat victims of sexual assault, ”explains Dr. Sofia Vasquez from MSF.

In this fishing village with no electricity, we crowd a basketball court in the center of the village to spend the whole night. All around, improvised shops sell $ 3 food. Not everyone can afford it.

Children are becoming more and more numerous among the regrouped migrants: 15 times more in four years, according to UNICEF. Many arrive dehydrated or have breathing problems caused by air saturated with moisture, says Dr. Vasquez.

When Adelis, the little Cuban woman, smiles as if she was going for a walk, “the Haitian’s daughter seems ill,” the father worries.

In the morning everyone queues to board canoes that will take them to a refuge in Lajas Blancas. You have to pay $ 25. From there it goes by land to San Vicente, from where you can take a bus for $ 40 to the border with Costa Rica.

The journey is far from over. You still have to cross Nicaragua, Honduras, Guatemala, Mexico to get to the border with the United States … and hope that you haven’t made this long and dangerous journey in vain.

Scholz wants to stick with a calm country style |

The count is over: the SPD wins the legislative elections |