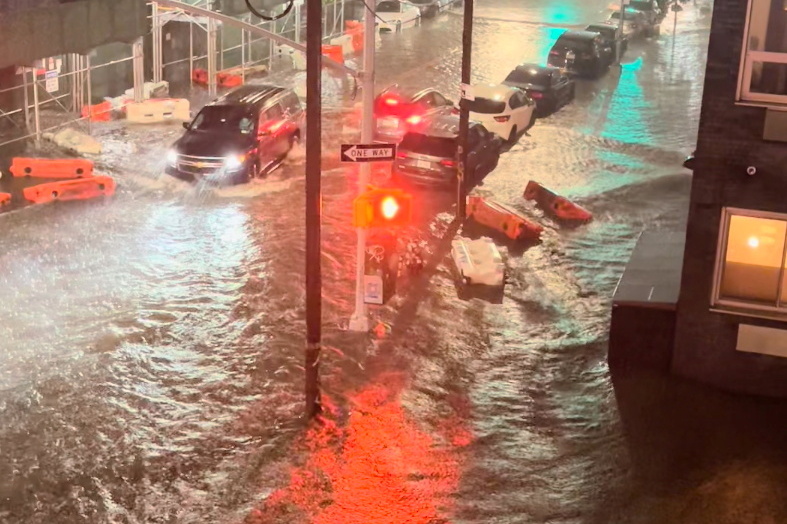 At least seven people were killed Wednesday through Thursday due to bad weather in New York during the night, according to police. These deaths bring the total death toll to at least 15 since Ida landed in Louisiana on Sunday.

Roads have been turned into rivers in America’s economic and cultural capital, while subway stations have flooded and stopped operations, according to the Metropolitan Transportation Authority, which manages New York’s public transportation.

In the middle of the night, the new governor of New York State, Kathy Hochul, declared a “state of emergency” after the “major” floods in all of the city’s border districts, which could affect around 20 million people.

Bill de Blasio, the outgoing Mayor of New York, who has already been hit by the COVID-19 pandemic, lamented a “historic meteorological event” in a tweet and also declared “a state of emergency”.

Hundreds of flights have been canceled at New York’s Newark, LaGuardia and JFK airports. A video showed a flooded terminal in Newark.

The rains began at 9:30 p.m. (Thursday 1:30 a.m. GMT) on Wednesday over New York City, where, according to several videos tweeted by the NWS, streets in the Brooklyn and Queens boroughs were flooded, making car traffic impossible.

“Do not drive on flooded roads. We don’t know about the depth and it’s too dangerous. Turn around and don’t drown! “I pushed the weather service.

Impressive tornadoes have been seen in Pennsylvania, New Jersey, and Maryland. Heavy rains and winds also swept through Westchester County in north New York, flooding many basements in minutes. Photos received from AFP show basements and ground floors of houses with at least 50 cm water depth.

In New Jersey, which was hit by torrential rains, Governor Phil Murphy also declared a state of emergency. One death was reported there.

In addition to New York and the surrounding area, Philadelphia was also put on tornado alarm. “Take refuge NOW. Flying debris will be dangerous to those who aren’t protected, ”tweeted Notify NYC, a New York City emergency communications program.

A surreal scene developed in Flushing Meadows, where rain swept over a well-roofed tennis court and interrupted a US Open second round match between South African Kevin Anderson and Argentine Diego Schwartzman. The water flowed through the four corners of the retractable hall roof, which was erected in 2018 in order to be able to play precisely despite the rain.

At the end of August, New York and its region were hit by Hurricane Henri. Bad weather on August 21 had prematurely ended a major concert in Central Park that was meant to symbolize a return to a more festive life after the coronavirus pandemic.

Hurricane Ida, downgraded to a post-tropical cyclone, brought heavy rains with it that led to widespread flooding on the east coast of the United States.

“Post-tropical cyclone Ida brings with it widespread heavy rainfall and flash floods that can pose a fatal risk along and near its path,” said the National Hurricane Center.

Ida is then expected to continue her journey north, heading to New England on Thursday.