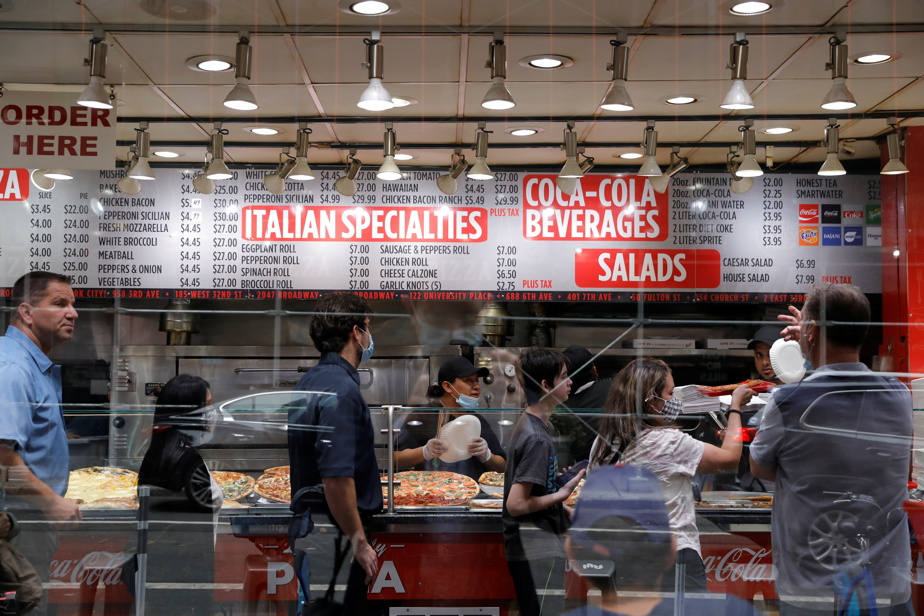 (New York) On the terrace of the La Boucherie restaurant, which takes up part of Park Avenue South, Francine Haselkorn puts on a double mask before answering the questions of the journalist who has just approached her.

“I don’t want to offend you, but I don’t know your vaccination status,” she says to the person she is talking to, who hurries to put on his own mask out of politeness rather than precaution.

At this point it is almost superfluous to ask the elderly lady what she thinks of the Mayor of New York’s decision, announced a few hours earlier, to be the first in the United States to issue a vaccination record for her city.

“Anything we can do to stop this rampant pandemic will help,” she said, answering one of the two big questions of the day in New York, the other about the governor’s future.

“But that’s not enough,” she adds, referring to the vaccination certificate that will be required in the American metropolis for access to the interior of restaurants, gyms and entertainment venues. “The federal government should impose vaccinations on the whole country. ”

For the time being, Mayor Bill de Blasio’s decision seems to have the support of a good majority of New Yorkers, judging by the reactions of La Presse in Manhattan after his announcement.

“That is a good thing, because too many people still refuse to be vaccinated or to wear a mask. It is they who are causing all the problems, ”said Jerome Pierre, 53, as he walked out of a gym on the Crunch Channel.

“Ultimately, it will force them to get vaccinated. But not only that. In addition, most infected people have in common that they are not vaccinated. ”

Mayor de Blasio’s announcement comes at a time when the coronavirus epidemic is experiencing a resurgence in New York, as in several other locations or American states. The city has more than 1,200 cases of COVID-19 contamination per day, about six times more than in June, an increase largely due to the Delta variant.

The New York Vaccine Pass, known as the “Key to NYC Pass,” requires at least one dose of vaccine for employees and customers of indoor restaurants, gyms, and theaters. It will debut on August 16 and, after a transition period, will officially take effect on September 13.

“Anyone who wants to fully participate in our society has to be vaccinated. The time has come, “said the Mayor of New York at a press conference on Tuesday. “It will be a duty. “

The vaccination record is the latest initiative by the City of New York to resume vaccination on its territory. Bill de Blasio last week announced a $ 100 bonus for every New Yorker who receives a first dose of vaccine in a city clinic. However, he refused to follow suit with other places, including Los Angeles County and the City of Washington, which re-imposed the wearing of masks in closed public places.

“Everything we do is focused on vaccination,” he said on Monday.

A few hours after Bill de Blasio’s announcement, Joe Biden spoke to White House Americans to take stock of what he called “the unvaccinated pandemic.”

“I know there is a lot of misinformation out there, so here’s the facts,” said the president, whose government was itself accused last week of causing confusion. “If you are vaccinated, you have very little risk of contracting COVID-19. And even if that happens to you, there is a good chance you won’t have any symptoms. And when you have them, most likely they will be very light. People who have been vaccinated are rarely hospitalized. ”

While hailing the surge in vaccinations in some backward states, Joe Biden has attacked Republican governors in Florida and Texas, where contamination and hospital stays have skyrocketed in recent days.

We need guidance from everyone. Some governors are unwilling to do anything to make this happen. I tell these governors that if you don’t want to help, at least avoid the people who are doing the right thing.

In New York City, Bill de Blasio is one of the people doing the right thing, says Robert Parks, retired museum curator. But the 77-year-old still has questions about the vaccination certificate.

“It’s a good thing for people my age. But I’m not sure it’s fair enough yet, ”he said, eating a sandwich at a table on a section of Broadway that is closed to traffic. “A separation is created between vaccinated and unvaccinated people. And I don’t have the same antipathy that some people have towards unvaccinated people. I don’t know all of the reasons for their choice. ”

Outside the Crunch chain’s gym, another regular spoke of “freedom” to justify his rejection of the vaccination card.

“Unvaccinated people already have to wear the mask for training. Why impose the vaccine on them too? You should be free to choose, ”he said, asking for anonymity.

But if the vaccination record can work in New York, it can work anywhere if you can trust the song.