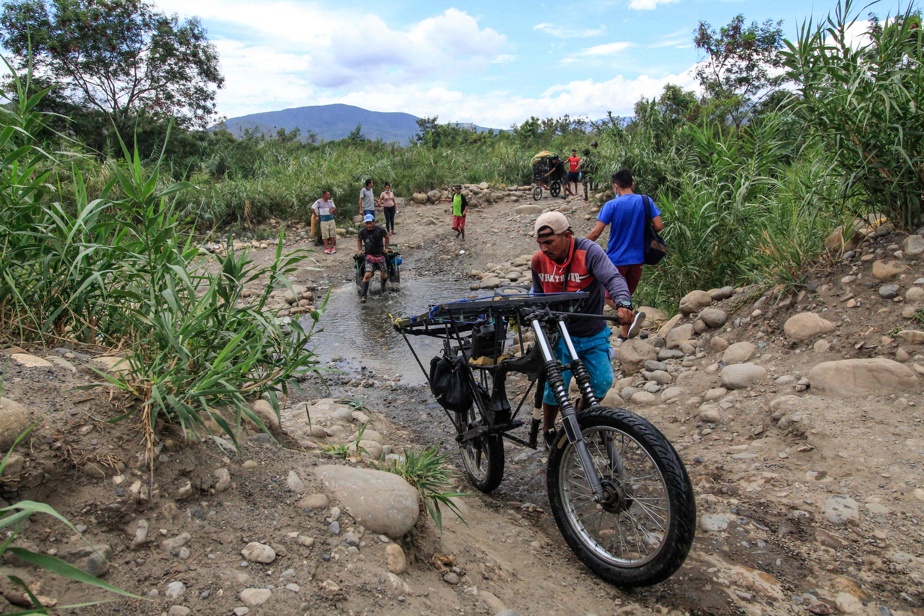 (Villa del Rosario) When will the effective reopening take place? Tight restrictions were imposed on Tuesday at the main border point between Colombia and Venezuela, forcing potential migrants to continue using the usual and arduous smuggling routes.

Venezuela announced on Monday, more than two years after its closure in 2019 amid a political and diplomatic crisis between the two countries, the “commercial reopening” of its land borders with Colombia to “turn the page”.

On the same day, the containers that had blocked the Simon Bolivar Bridge, the main border point between the Venezuelan city of San Antonio del Tachira and that of Cucuta in Colombia, for two years, were withdrawn, immediately giving hope for a quick resumption of traffic, Exchange and traffic of vehicles on this emblematic bridge.

The ace! 24 hours later, almost nothing has changed, AFP found.

As usual, only a few hundred pedestrians were allowed to cross the white cement bridge. Mostly Venezuelan citizens who justify a doctor’s appointment on the Colombian side, school children and also binational people.

Especially on the Venezuelan side, many have come across the usual wall of restrictions and harassment of all kinds.

“The passage is terrible,” comments an older woman with plenty of gray hair, who is preparing for the journey home to San Antonio del Táchira, the first city on the Venezuelan side.

With a slow pace, her doctor’s approval in hand, she only wanted one thing: to open the bridge quickly so that “the abuses can be eliminated”.

Today it could happen legally. But otherwise there is no other choice than the “trochas”, the local name for hundreds of illegal paths that connect the two countries throughout the border area and even near the emblematic Bolivar Bridge.

There “they (the smugglers) are still exploiting us,” she lets herself be carried away. “If they carry a bag, they burden you, you pass and they burden you,” she scolded.

“Open it quickly!” It’ll be a lot easier that way, ”says Elizabeth Cáseres, a 47-year-old housewife.

“People are waiting for the normal passage to reopen to get rid of the trochus problem,” she said, holding a ticket confirming that she was in Colombia for medical treatment.

“The opening (of the border) did not take place on the Venezuelan side,” said the director of Migration Colombia, Juan Francisco Espinosa, during a visit on site.

Colombia probably does not intend to let the agenda of this reopening be dictated by Caracas.

“We Colombians will not be the useful idiots of the Venezuelan government’s election claims” because we also know that these gestures have a political intention, “said Colombian President Ivan Duque on Tuesday.

The border has been almost completely closed since 2015 due to the tensions between the two ideologically rival neighbors with 2,200 kilometers of shared and permeable borders.

“The passage of vehicles on international bridges is only permitted after technical controls […] The Colombian government issued a warning on Monday.

“There is only one humanitarian passage,” a Venezuelan agency announced to some young people who are forced to turn back while trying to cross Venezuelan soil.

And so the “Trocheros” continued their trade on the illegal routes, carrying luggage and goods on their shoulders for money. Small carts with eggs, rice, toilet paper and laundry circulate at arm’s length towards Venezuela in the middle of the economic crisis.

Elderly people cross the Tachira River, which is low at this time of year, and is carried by young people for a few Colombian pesos.

On the Venezuelan coast, a hooded man with a radio in hand monitors the movements of two Colombian police officers who are on guard on the other side of the river.

These often armed smugglers rule on both sides of the river and meander through the undergrowth to avoid the Colombian police and soldiers.

They control the banks of the river and encourage every move. Not a fixed price, but a “collaboration,” explains Inti Mella, a San Antonio resident who will be returning to work “today” from Colombia laden with hardware and carpentry tools.

Following the announcement of the border reopening, the 49-year-old man tried to enter normally by crossing the Simon Bolivar Bridge. But “you go there and we put a thousand obstacles in your way.” “Obstacles that force me to go this way” of the contraband plague him before he starts the ten-minute journey into the undergrowth.

The day he can cross the asphalt bridge, his life will be “100% better,” he says.

“The same paths continue to work and it is they that cause the passage of everything that is illegal,” commented Jaime Marthey, head of the office of the mediator (ombudsman) in the border department of Norte de Santander on Tuesday.

“The restrictions (from Venezuela) remain the same,” he said.